Share All sharing options for: B1G 2012 // Minnesota's Smartest Guys In The Room

The Tim WINFIGHTTRYROSEBOWL Brewster era left deep scars on an abused Gopher fan base, and when he was mercifully fired halfway into the 2010 season, Gopher fans were starving for a big name. When then-AD Joel Maturi promised a 'Tubby Smith' hire, in reference to the big name basketball coach who was hired out of left field a couple seasons earlier, fans were excited. When the name 'Jerry Kill' was announced, and not 'Chris Peterson' or 'Mike Leach', there was a couple of days of anger and outrage.

But that was gone about one minute into Jerry Kill's introductory press conference, as it became apparent that Kill was smart, funny, humble...and realistic about where the Gopher program is and where he wants to take it. I love this snippet of him mic'd up from last year's spring practice:

When you look at Kill's impressive resume, you notice he was an offensive and defensive coordinator before he became head coach (rarity), and in 18 seasons as the top dog, he's only had a losing season three times. He is very much a no-nonsense guy, and his brutal honesty about the program when he took over won him a lot of grudging respect among the fan base. It's not necessarily what the Gopher football fans wanted to hear, but one thing about Kill is that he isn't going to blow sunshine up your skirt. And frankly, it was a refreshing change from what they had heard for most of the previous four or five years. Some moron thought Kill was talking down the program to lower expectations, and predicted a 7-5 season. Turns out Kill was right, and not the moron--go figure.

Kill brought the core of his staff with him (more on that in a bit), he is known for turning around programs, and his track record in that regard is impressive. His biggest challenge was probably Southern Illinois, which he took over in 2001. They didn't have a full time weight room, and the administration was considering dropping football completely. All he did was go from that point to 5 straight FCS playoff appearances from 2003-2007, going to the semi-finals in his last season there. He had similar results at Northern Illinois, taking the Huskies to a bowl game in each season there, and got to the MAC Championship game in 2010.

Minnesota was in rough shape when he took over, but it wasn't nearly as bad as Southern Illinois. After he was hired, Kill immediately went to work, opening up a dialogue with all the high school coaches in the state. It paid dividends right away, as 9 of the top 12 recruits in the state stayed home and committed to Minnesota. Now, I'll grant you that Minnesota isn't a recruiting hotbed, but there is talent to be found in the state, and the fact that Wisconsin can no longer take in state offensive line recruits for granted (Jonah Pirsig says hi Bucky!!) is a win almost by itself.

He got the Gophers to within one point of a huge upset of USC on the road in their opener, went through a bad, bad stretch in the middle of the season, including terrible losses to New Mexico State and FCS North Dakota State, but did something Tim Brewster never did--win a trophy game, bringing home Floyd against Iowa. He then followed that up by ending Ron Zook's B1G coaching career in the season finale in a convincing 27-7 whipping. The Gophers still have a ways to go, but after a lot of bleak years with little optimism, things are starting to look up in Dinkytown.

If there's a downside to the Kill hire so far, other than the 3-9 record, is his long term health. Kill is a cancer survivor, and one of the side affects for his successful treatment for kidney cancer is that he has periodic epileptic-like seizures. Last year, he had to take some time off during the season after a particularly scary episode towards the end of the New Mexico State game, and a few weeks later he took more time off and received treatment for them at the Mayo Clinic. That said, Kill is very upfront about it to the team and potential recruits, and hopefully, he's getting that under control and will be able to coach at Minnesota with no long term health issues.

"I’m a roll your sleeves up guy. My motto is "we will outwork people."

Minnesota made progress under Kill, but there is much work to do. Kill seems the right guy for the job, as his no-nonsense approach started to pay dividends last year with late season wins over the aforementioned Iowa and Illinois. Even though 3-9 was not the result people were hoping for, there is still optimism among Gopher football fans, because Kill brings hope. He was the first coach hired by the Gophers with an overall winning record in decades, his history of turning around programs speaks for itself, and with a decent recruiting class and a continuity in the coaching staff not seen in these parts for quite awhile, there's a reason to be optimistic, long term, about Gopher football.

Jerry Kill admitted in his introductory presser that he's not a technology guy, but he does have a Twitter account for his football camps. But there is no Twitter trend for Jerry Kill the coach. Because Jerry Kill is too busy trying to make Gopher football relevant again. 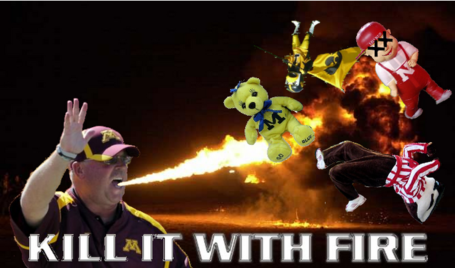 Jerry Kill wins the B1G coaches name game. For all time and forever.

Kill. That is all.

I mentioned earlier that Kill brought the core of his staff with him from Northern Illinois, which isn't all that unusual in this day and age. What is unusual is how long Matt Limegrover and defensive coordinator Tracy Claeys have been with Kill. One of the most encouraging things about Kill and his staff is their stability, something that wasn't there under Brewster. Key coaches were constantly coming and going, and former QB Adam Weber had to learn three completely new offenses in his four years in Minnesota. That won't be an issue with this regime, as Limegrover has been a member of a Jerry Kill staff since 1999, and became his offensive coordinator in 2001.

Limegrover has been the architect of some top notch spread offenses and solid offensive lines at SIU and NIU, but last year was a disappointment as the Gopher offense was at the bottom of every single statistical category in the conference. They got better as the season wore on, and with a year in Limegrover's system, senior QB Marqueis Gray should have a much better season. That's a reasonable expectation, because it's the first time in about 4 seasons that there hasn't been a new offensive coordinator, and Gray has been described as the perfect quarterback to run the offense Kill and Limegrover have brought to Minnesota. What is that offense? When running on all cylinders, Gray will be a legitimate dual threat in a run first spread offense that creates mismatches with misdirection, and a big play passing game that takes advantage of a defense keying stopping the run.

Unresearched O/U on years it will take to be a head coach: Never. Limegrover has followed Kill from place to place for over a decade, and has said he's content to continue to do so.

As I mentioned above, Claeys has also been with Kill for over a decade, joining his staff at Saginaw Valley State in 1995, and then becoming Kill's defensive coordinator at Emporia State in 1999. His defenses are known for attacking offenses with various blitz packages that put a lot of heat on the quarterback. And like Limegrover's offense, the Gopher defense left a lot to be desired last season, as they were near the bottom of nearly every major statistical category in the conference.

But when everything finally seemed to come together in wins over Iowa and Illinois at the end of the year, we got a glimpse of what could be in 2012--an aggressive defense that forced the action, didn't give up a lot of big plays, and gave the offense a chance to win at the end. As the Gophers get more talent on their roster, and guys Claeys recruits get in the lineup, expect Minnesota to be one of the more aggressive defenses in the B1G.

Twitter: The Gopher coaching staff laughs at you and your 21st century technology.

Unresearched O/U on years it will take to be a head coach: Never. Like Limegrover, Claeys has followed Kill from place to place for over a decade, and has remained very loyal to him. Although he was interim head coach after Kill had to deal with health issues last season, Claeys apparently has no desire for a full time head coaching gig.

And like Indiana, Minnesota goes all 'high school yearbook' with the photo backgrounds. I want Glamor Shots, with the turned up collars, the over the shoulder looks, the garish costumes, and two bottles of hair spray...and I want them now!