I think everyone at OTE was ready for Ron Zook to go. We appreciated the humor and the ridiculous quarterback switches, but we here love some good coaching and good football sense. And the Zooker didn't bring that in spades. So yes, the Illinois Fighting Illini set a record last year by winning 6 and then losing 6 to finish the season. That's all in the past. Time to take a look at 2012, where a new coach and a challenging road schedule won't make the going easy.

Zook is gone, along with his inability to make effective in-game adjustments or tailor an offense to his players strengths.

A bowl win is always nice, even if it may have had traces of a cripple fight...

And let's not forget there will be some returners in 2012, 14 starters to be exact.

That damn spread offensive system, the one that looked out of sync and punchless much of the year? It's still alive and struggling, judging from the Spring Game.

It looks a bit like a Pistol system, but it's a Spread with read-option. And it was ugly in 2011, breaking 20 points in conference play only twice. A.J. Jenkins, he of the 90 catches and probably the Illini's best offensive threat, is gone also. 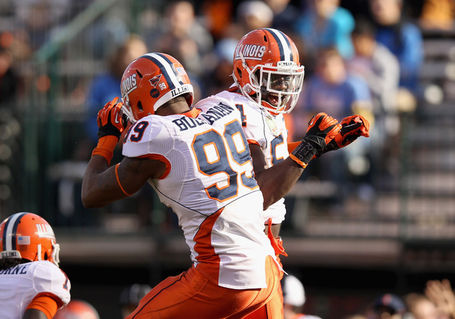 There are two quarterbacks, Nathan Scheelhaase and Riley O'Toole, who are capable of leading the team. Because O'Toole is white and doesn't feature a huge arm, we will henceforth refer to him as "scrappy" and "savvy", otherwise the Gods of sports cliches would be unhappy with us.

There are two running backs, Donovonn Young and Josh Ferguson (150 yards in the Spring Game), who are big play guys.

The tight end position will be a strength for years to come.

The offensive system makes me want to die.

I know it's a spread, I know it's not built for long passes, I know the talent level of the skill players isn't that high. But the Illini are going to have a tough time completing any passing pattern that asks for some kind of timing. Sadly. most patterns do in fact demand some sort of timing.

Furthermore, are we going to see some of the same QB musical chairs as we did last year? One has to assume new coach Tim Beckman won't make the same mistakes as Ron Zook did, switching in his quarterbacks with no rhyme or reason. 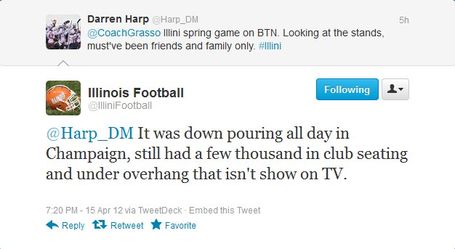 Defensive lineman Michael Buchanan is the man. A ready for the NFL man.

Do everything Terry Hawthorne, who is going to play on both sides of the ball, is also the man.

Anyone who watched the Illinois Spring Game knows that the Illini are aggressive tacklers...and that the defense is way, way ahead of the offense.

Nick Immekus connected on a 47-yard field goal during the Spring Game; that's some good kicking in rainy conditions and during Spring ball. 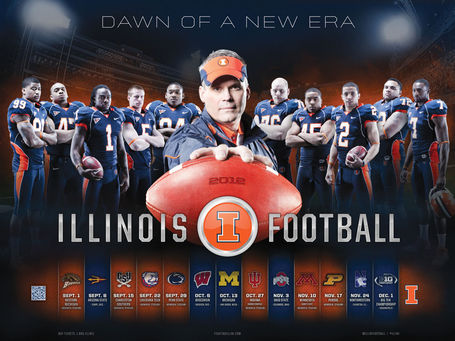 Seven home games for a new coach, with tons of winnable games at Memorial (PSU, Indiana, Purdue, Mini). Expectations are low for Beckman, so picking up some bunny home wins would do well to propel him into year 2.

My god, the five away games are monsters: ASU, Wisky, Michigan, OSU, NW. Those are all L's on the prediction chart right now.

If you're talking to an Illinois fan

Don't mention the lack of Illini participation in the blogosphere or the low expectations for Beckman.

Don't mention that Nathan Scheelhaase has two years starting under his belt and still only has a tenuous grip on the starting QB spot. Because really, what does that say about his development?

The fact that at some point in this year, judging from the Illini's history, the running game will win a game or two on its own.

Do mention all those winnable home games.