**A quick note: As you likely have heard by now, former Gopher LB Gary Tinsley was found dead last Friday morning in his dorm room, by fellow-Gopher LB Keanon Cooper. As a long-time Gopher fan who follows the team incredibly closely and who has been attending games since I can remember, I'm not sure how to deal with Tinsley's death during Minnesota week. When I read the news on Friday morning while working I began to tear up. I don't mean to over-dramatize the situation, but you don't realize how close you feel to these players until something like this happens. #RIPGT51**

Greetings loyal readers. Those of you who stuck with us through the dead of winter know that the pulse on the front page of this site grew a bit faint. That is ancient history. Today is the beginning of week 2 of B1G 2012, our comprehensive offseason preview series. From now through mid July, we'll be dedicating each week on OTE to individual programs, and providing daily team insight and analysis. We'll work in reverse chronological order from last year's conference finish.

SECOND IN A SERIES: THE MINNESOTA COCKTAIL PARTY PREVIEW 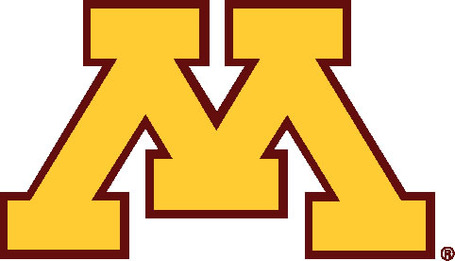 Last year, we introduced the concept of the "cocktail party preview." If you're new to these parts (or, gasp, weren't paying attention last year) here's the idea. Imagine you just graduated from school and you're looking for a job in this crappy economy, or you're employed, and your boss asks you to schmooze a few prospective clients on the golf course. Either way you're in front of somebody you really need to impress. As you sit down in the hiring partner's office, or walk up to the putting green, you notice your mark has a framed picture of Darrell Thompson on the wall, or a Gopher Head on his driver sleeve. "Did you go to Minnesota?" you ask politely. "Heck yeah," comes the response. "I've had football season tickets for 18 years." And then, after a pause, he asks, "You a fan?"

After you thank your lucky stars you're not a HOGeye, you ask yourself: what do I really know about Minnesota football? The bad news is not a lot. But have no fear, you read Off Tackle Empire's Minnesota Cocktail Party Preview, a distilled, no-nonsense, matter of fact primer for the unacquainted fan. The content that follows will arm you with just enough knowledge to navigate your way through any social encounter. Or at least give you enough information to make polite conversation at a cocktail party.

Like always, we've tweaked the format a bit this year in favor of a dichotomous "on one hand/on the other hand" approach. Just like most things in life, there's good news and bad news for the Gophers heading into 2012. What do you want to hear first?

Jerry Kill did something that Tim Brewster was never able to do, and he did it the very first time he had the chance: beat a border rival. That win came after the Gophers had started the season 1-6, and although they finished their final 5 games with only a 2-3 record, they played like a completely different team in those final 5 games.

They ended 2011 sealing the fate of Ron Zook at Illinois with a 27-7 win over the Illini.

3-9 was certainly not the type of season Gopher fans expected to have in Jerry Kill's first season. After giving USC everything it could handle in Week 1, the next six weeks were like getting a root canal from a mechanic. They did win a game over Miami (Ohio) in that stretch, but there's just no denying the fact that the Gophers were just plain awful over that stretch.

The bottom line is that the Gophers looked lost and over-matched in every facet of the game more often than they looked like they knew what they were doing last season.

2011's leading rusher was QB MarQueis Gray. He will be back to give opposing Defensive Coordinators fits.

The 2012 Gophers have nowhere to go but up after ranking 111th in the nation in points/game last season.

By all accounts MarQueis Gray has been working his tail off in all aspects of life and he has truly emerged as the undeniable leader of this football team. He's now got a year of Matt Limegrover's offense under his belt, and his experience and the trust of his teammates should go a long way toward making him even more dangerous. 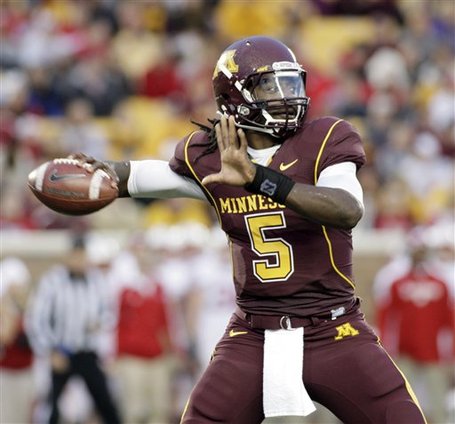 The Gophers ranked 111th in the nation in points/game last season.

3 of the Gophers top 5 tacklers from 2011 are back in Mike Rallis, Keanon Cooper & Brock Vereen. Rallis, who is a team leader, is quick and is a great tackler, has bulked up in the off-season and will be moving to MLB.

The Gophers have nowhere to go but up after ranking 11th in the B1G in scoring defense last season giving up nearly 32 points/game.

Def. Coordinator Tracy Claeys began to get results from a young Gopher defense the second half of last season, and he's back this year to continue the work.

2011's defense was awful. They ranked 9th or worse in the B1G in almost every defensive statistical category last season.

Perhaps the best news of all is that the leading Kickoff Returner in the history of the B1G, Troy Stoudermire, was granted an additional year of eligibility due to a medical hardship.

Special Teams is an area of focus for Coach Kill and the Gophers saw big improvements as the season went along. Kill will continue to focus on this area and plans to make it a true strength for the Gophers.

Honestly, there isn't too much bad news at this point. The leading Kick Returner in the B1G is back, the punter is back, the kicker is back... this is actually an area of the team that has some good experience returning.

Minnesota has an opportunity to build some great momentum early in the season in 2012. They begin on the road in Vegas, then have 3 winnable non-conference games at home before traveling to Iowa for the B1G opener, then hosting N'Western for homecoming. The Gophers have proven anything can happen with the non-con schedule, Iowa will be tough at home, without question, and N'Western has played the Gophers tough for years, but do the Gophers have a chance at starting out 6-0? No comment.

The Gophers will also travel to Madison, and while the BADgers are arguably the Gophers biggest rival, Minnesota has only beaten the BADgers 4 times in the last 20 years.

If you're talking to a Minnesota fan

The Gophers record vs Wisconsin over the past 20 years.

The fact that the Gophers beat Iowa (again) last year.

The continuity in the coaching staff.