Share All sharing options for: B1G 2012 // Your Record Isn't Everything -- Unconventional Wisdom on Why Northwestern is Getting Better

I'm a Northwestern optimist. I wear purple-shaded glasses when it comes to my favorite team. Last year, I picked Northwestern to go 11-1 before the season....and while I was clearly proven wrong, my "glass half-full" soul still believes Northwestern was much closer to 11-1 than their record suggests (see below).

And I do not apologize for it.

College football is supposed to be fun, right? Well, I don't particularly think it's "fun" to bitch and moan about my team, to dissect its flaws, or to loudly advocate for the firing of a coach or coordinator. If that's fun for you....go for it. There's certainly an increasing number of fans of Northwestern who will be happy to join you -- who want to fire defensive coaches (defensive coordinator Mike Hankwitz and defensive backs coach Jerry Brown are frequent targets of ire), lower academic standards for athletes because they feel it's impossible to compete with the current admissions standards, or find fault with Fitz's "Go Cats!" cheerleading or his gameday management or his "failure" to win a Big Ten title as quickly as his 2 predecessors. Hell, some fans even think Fitz should be fired.

Don't expect me to join in. Instead, I'm going the other way. I'm going to tell you why Northwestern is building itself into a juggernaut. Follow me below the jump for some unconventional wisdom on why Northwestern's slide in the wins column from 2008-2011 has masked some dramatic improvement in the Cats.... 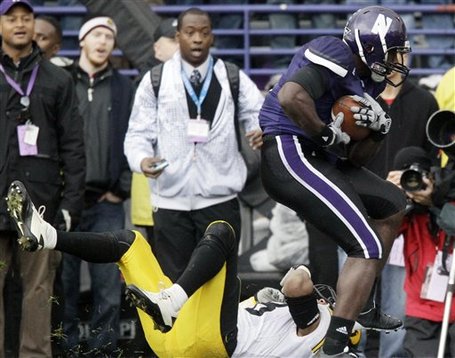 Iowa fans will tell you: Northwestern is getting better. (Or they'd accuse Fitz of ass-eating fueled wizardry.)

2. Northwestern's Talent is Getting Better: I don't put a ton of stock in recruiting rankings -- it's far too difficult to assess the talent of high school players given different levels of competition, and too many recruiting services base rankings in part on whether a kid is getting recruited by a "name" school with a ton of subscribers. However, to the extent these rankings do have merit (and studies suggest they have some correlation with actual production), Northwestern's recruiting is arguably on an upswing under Fitz.

According to Rivals, this is how Fitz's classes (2007-2012) have measured up (Nebraska has been included here):

Now, the class rankings aren't that impressive, but keep in mind the class rankings are heavily weighted towards larger classes (and Northwestern almost NEVER has large classes, thanks to redshirting players, few early-entry NFL players and graduating everybody). But the average star rankings have been on an upward trajectory (that 2010 class is now juniors/redshirt sophomores), and Northwestern is starting to attract more upper level talents (they've already signed 4-star QB recruit Matt Alviti for 2013). Moreover, Northwestern used to be in competition with MAC schools for players -- now, they're competing against (and beating sometimes) bigger name BCS programs for players (Alviti chose Northwestern over Michigan State, Nebraska, and That School in South Bend).

3. Northwestern is playing ALL of its opponents closer: Let me state an obvious point -- you can't win when you're getting blown out. And Northwestern under Fitz has been FAR better at avoiding blowout losses.

Looking just at losses by more than 2 TDs (15+ points, i.e. games you pretty much were never competitive in), here's how the Cats have done under Fitz:

Look -- wins matter, and arguably are ALL that matter. But Fitz's teams have become more competitive, at least so far as avoiding the crushing blowout losses where the team didn't even belong on the same field as its opponent. And that's an important step.

Even last year, when Northwestern lost 7 games, it had a second half lead or tie in 4 games -- it lead or was tied in the 2nd half in losses against Army, Illinois, Michigan, and Iowa. Against Penn State it trailed by just 3 at halftime. This is not a Northwestern team that is getting crushed....they're continually playing their opponents hard. If the talent keeps increasing, and the coaching improves (even marginally), Northwestern is going to win more games. 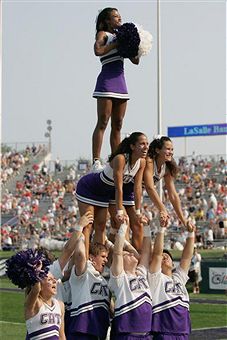 4. The Fan and Administration Support is Getting Better: Obviously, Northwestern has a LONG way to go before every seat in Ryan Field is filled with purple-clad fans. But things are getting better -- season ticket sales have increased each year thanks to new marketing initiatives (and overall attendance is up generally, although it spiked thanks to the Wrigley game in 2010). Students are showing up to games in droves -- at a university with 7500 undergraduates, almost 5000 students show up per game -- which speaks well for future young alumni season ticket sales. Northwestern continues to sell-out/do very well at selling out its bowl allotments wherever they've played. Coverage in the Chicago-area (and national) press continues to improve.

And bigger than that, the administration is getting behind the program in a MAJOR way. The recent Under Armour contract is exciting for the team -- money for the program, merchandise that will be available for fans in stores area-wide and/or nationwide, and high visibility to recruits thanks to Under Armour's aggressive marketing. Football has arguably no bigger fan that Northwestern President Morton Schapiro, who famously introduced himself to Northwestern fans by jumping up and down screaming on the sideline as Drake Dunsmore scored in the Outback Bowl.

And Northwestern is about to announce a huge facilities plan for athletics. No one has any idea what it will contain, but the rumors are very good -- on-campus football training facilities, a complete stadium overhaul/renovation....hell, there has even been talk (albeit probably unrealistic) of a lake-front stadium.