After a long layoff, the All-Time Since 1996 Big Ten Football Tournament is back. In case you don't remember (it has been awhile), this is a tournament pitting the best teams from each school on Whatifsports.com. For a more detailed explanation, click here. We'll be posting these every Saturday until it is finished, as imaginary football games on Saturday are better than none at all.

For the third game in the first round, we have the #6 2002 Iowa Hawkeyes against the #11 2003 Minnesota Golden Gophers. Before we get to the game, here is some background on our teams.

Head Coach Glen Mason had a very potent running attack in 2003. The backfield duo of Marion Barber III and Laurence Maroney helped the Gophers average a ridiculous 289 yards/game on the ground. QB Asad Abdul-Khaliq kept opponents honest by throwing for over ten yards per attempt and managing 17 TDs to just 5 INTs. The defense wasn't quite as solid. In two of their three losses on the season, UM managed to lose despite scoring at least 35 points. They also won Paul Bunyan's Axe in 2003, which is their most recent win against Wisconsin.

The 2002 Hawkeyes went undefeated in conference play, but didn't even win an outright title. Ohio State was also undefeated that year and the two teams didn't play each other (obviously). After an early season loss to hated-rival Iowa State, Iowa rolled off nine straight wins, including all eight of their conference games. The streak included impressive road wins at Penn State and Michigan. QB Brad Banks won the AP Player of the Year Award, Dallas Clark won the TE Award and Nate Kaeding won the Kicker Trophy. #3 USC easily won their Orange Bowl matchup, but that doesn't take away all that the Hawkeyes accomplished in 2002. Most would agree that this was Ferentz's best team, even if Ricki Stanzi wasn't involved.

Enough with the background, let's click on and see who won! 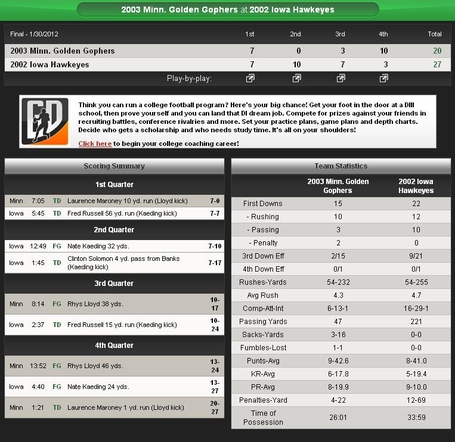 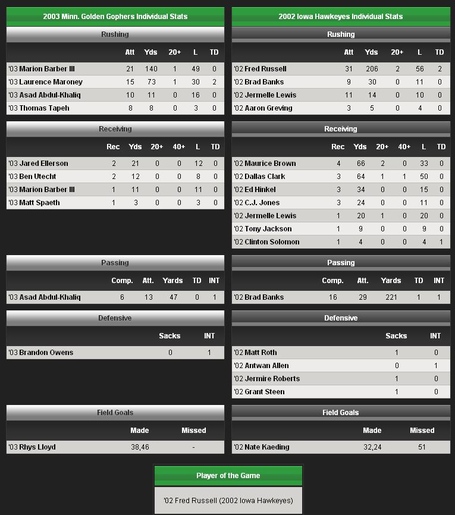 Minnesota's running game was pretty effective, as expected, but Iowa's Fred Russell was the most dominant RB in this one. He broke open a 56 yard TD run in the first quarter after Minnesota took an early lead, and he finished the game with over 200 yards on the ground.

While the Gophers managed an impressive 232 rushing yards, their inability to get anything going in the passing game led to their demise. Glen Mason's strategy of converting on third down only two times out of fifteen the whole game didn't work out well for the Gophers. Brad Banks managed to keep the Minnesota defense from concentrating too heavily on Fred Russell by passing for over 200 yards.

A late score by Minnesota (and Iowa's 12 penalties) made the final score a little closer than it seemed to the computer fans that watched the computer simulation occur in real time. The Gophers couldn't convert the onside kick that they needed with about a minute to go, and the Hawkeyes held on for the victory.

Here's a look at the ATS1996BTFT bracket after this contest: 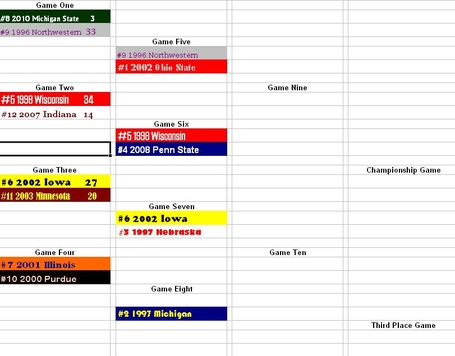