Oh look, it's finally my turn to take a stab at this whole hate thing. Outside of a fairly kind diatribe against Michigan last year, I find myself still trying to muster up enough hate to feel like I am in the big leagues. Maybe it's the good ol' boy Midwestern thing we have going in the Cornhusker state, and maybe it's the fact that we've barely played most of the teams in the B1G, but as a general rule of thumb, it's been really difficult to hate anybody. I mean, you've just been so nice... So when given the opportunity to actually try my hand at hating, the obvious place to start was Northwestern. After all, if I'm going to start somewhere, it might as well be the minor leagues, right?

Seriously though, I was trying to come up with reasons why I hate Northwestern, but other than their uncanny ability to beat Nebraska in everything and their love of the moniker NU, I was having trouble really understanding why anyone even cares about Northwestern. And then I had an epiphany. Do you know why I hate Northwestern? I hate them because everything they talk about pretty much amounts to just another moral victory. Whether it's their record breaking attendance, unprecedented bowl streak, great coach, or room of pelts, pretty much all Northwestern fans resort to obnoxious retorts about how Northwestern will one day be a juggernaut. Well, I'm here to dispel that notion by debunking some lines of Moral Victory Rhetoric that Northwestern fans likes to tout. When we're done, we'll see why Northwestern is just an expensive version of another annoying team from my past.

Come on, I know Northwestern isn't a blueblood by any stretch of the imagination, but have a little self respect. You know who get's excited about knocking off Top 25 teams? Teams not in the Top 25, 1-AA teams, MACrifices, and Zook. Last year, I watched Northwestern fans, coaches, and players trot of Memorial Field like they were the effing Dillon Panthers and they had just overcome the astronomical TV odds to win a game. It was as if their entire world was complete. You know the difference between Northwestern and Dillon? Dillon actually won something -- a championship. I think that the entire Big Ten will agree with me when I say, "Who effing cares?" With the exception of Indiana, I'm pretty sure every B1G school beat a ranked opponent last year. If this is what gets you going, you really should reassess your priorities.

Congratulations Northwestern, you have officially achieved what 92% of the B1G did last year. Like I said, it's just another Moral Victory. 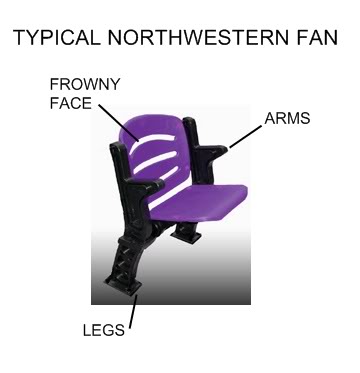 Moral Victory Rhetoric #2 -- "But guys, we got like 32k fans in the stands EACH game last season."

I know pretty much everyone has talked about how hating Northwestern includes their entirely lame attendance figures, but let's quickly revisit this, shall we? For a school that claims to be a large part of Chicago's rooting interest, shouldn't you be pulling in sellouts just by virtue of people looking for something to do? Surely tickets can't be that expensive, and by August, the Cubs suck (I'm a Cubs fan, and I approve this message). I know Chicago has lots of outlets, but College Football is a fairly universally loved sport, and if you're Chicago's team, shouldn't you actually be getting Chicago level attendance? Do you know why people hate hearing about season ticket sales at Northwestern? Because the fact that you can actually buy season tickets means there is a surplus. Some of us actually sell out games. I know, I know. This is where Northwestern fans start clamoring about Nebraska smugness, but no, this is another universal truth. Most B1G fans cannot comprehend your poor attendance. It's as if getting 1,000 extra people in the stands is some great feat. I am seriously considering going to Ryan Field this Fall, but the simple fact that I would be both a) Supporting Northwestern's outdated facility and b) pushing up these terrible numbers, makes me question the trip. Maybe I'll buy a ticket off a scalper. At least I can say the ticket was already purchased and accounted for...

Congratulations Northwestern, you officially got to 1/3 the capacity of the larger B1G stadiums. Way to bring up the rear on that one. What was that? Oh yeah, it's just another moral victory.

First off, I hate teams who get pumped about just getting to a bowl game. At some point, isn't it just a fancy way to spend University Dollars and get out of the cold winter crap we deal with in January December (this is Northwestern we're talking about)? Seriously, at what point is it more of a false hope than a reward? "But, but, but, but we went to the Rose Bowl and if..." Big deal. Let's name other teams who won bowls LAST YEAR:

Again, look at that list. These are all teams that actually won their bowl game last year. They understood that getting there isn't just good enough. If you're going to talk about how your school is getting better, shouldn't you, oh I don't know, actually be getting better? Again, I think I speak for all of us when I say, "WIN A BOWL GAME" because it's getting real old. How long has it been now? I hear Truman was president? Great work guys.

Congratulations on being 1 of 70 schools that made a bowl last year. Even though you lost, at least you weren't part of the minority of schools that did not go Bowling. Looks like it's just another moral victory for Northwestern.

Um, there really was a Northwestern fan count off this week... As in, holy shit, we're really going to count ourselves aloud like the teacher made us do in fourth grade when we all got back on the bus after a field trip. Is this forward progress? I don't think so. But again, it's a moral victory because instead of my joke about Northwestern having five fans, I now have to change the punchline to 11... I actually think that I hate you more for that pathetic gesture than I did when I just disliked your ability to beat Nebraska in everything.

Congratulations on having 11 fans. Wait, I'm not even going to congratulate that. This is less a moral victory and more a cry for help. I'm pretty sure we need to move on.

And this is where I'm going to end this little bout of hate. Look, I can deal with a loss to a team that has no business beating my team. I can deal with a delusional fanbase that thinks progress in attendance is breaking 30,000, I can even put up with the, "Good ol' fashion try" at bowl games and the attempts at showing solidarity by pointing out you actually have 11 fans, but this is where we all agree the hate comes to a point. I get that your fancy little school is fantastic, and I get that you churn out a lot of smart people. However, there are only a few people on earth who resort to this chant, and I happen to hate pretty much all of them.

Congratulations, your football team cheers are now on par with annoying private high schools in small towns, arrogant Division II Ivy League Football competitions featuring boring football, and TSISB. This isn't just a plain moral victory, it is also an expensive moral victory. And you're the smart ones?

So let's recap. What we have learned here today is that every single thing that Northwestern is proud of is pretty much just another moral victory. As Chad pointed out, Illinois might not be able to have nice things. However, if I'm an Illinois fan (or pretty much anyone else), it's probably worth noting that Northwestern just pretends to have nice things. The reality is that their nice things usually are just another lame excuse to divert you from the facts. I used to pity the Wildcats. Whether it was their terrible purple uniforms, their aura of the kid who just wanted to be on the team, or their small school doing it the right way attitude, I used to think they were worth at least getting a sympathy support clap. After all this, I can honestly say I hope Northwestern doesn't win another game. Between its inflated sense of importance in the football landscape, the penchant for only getting up for big games while losing to schools like Rice, and their sad excuse for a football facility, they are basically the expensive version of this: 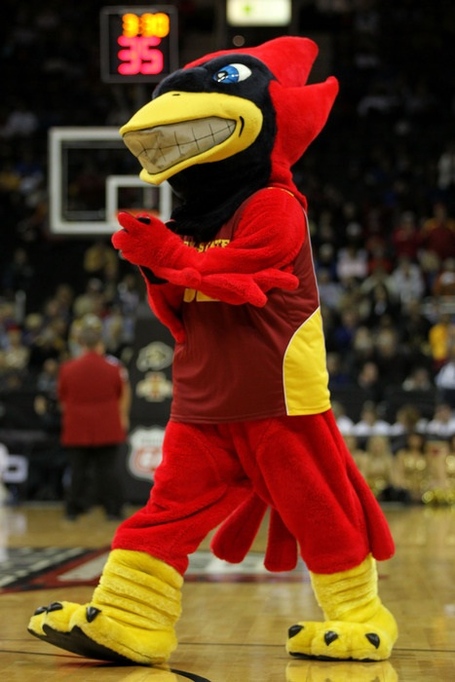 Congratulations Northwestern, you're basically an expensive version of Iowa State. Trust me, this is not a compliment. This is not a moral victory... this is just plain sad.