It's time for the last first round game in the ATS1996BTFT. In a nice coincidence, Purdue is playing in a game at the end of B1G 2012: Purdue week. Drew Brees' 2000 Boiler team faces off against Kurt Kittner's 2001 Illini squad. As always, the game was simulated on a neutral field on Whatifsports.com. For a more detailed explanation of the games, click here.

The Boilers lost close games at Notre Dame and Penn State, as well as a not close game at Michigan State. After the PSU loss, Purdue ran off wins against eventual co-champs Michigan and Northwestern, as well as a very dramatic home win over Ohio State. The season ended with the Boilers beating an overmatched Indiana team to earn a trip to the Rose Bowl. #4 Washington beat Purdue in a reasonably close game in Pasadena to end Drew Brees' college career.

Drew Brees was the unquestioned leader of the 2000 Purdue team. He won the Maxwell Award and was third-place in the Heisman voting. He had a great OL, as Matt Light, Chukky Okobi and Brandon Gorin were all drafted following the season. Tight End Tim Stratton won the TE award, and WR Vinny Sutherland, John Standeford and Seth Morales all had outstanding years. On defense, Stu Schweigart and Chris Clopton were great DBs, while Landon Johnson, Gilbert Gardner, Akin Ayodele and Matt Mitrione took care of business up front.

The 2001 Fighting Illini had a dominant regular season. Their only loss was at Michigan, who ended up second in the conference. Ron Turner's squad won road games at Cal, Purdue, and Ohio State. Their most impressive home wins were against Louisville, Wisconsin, Penn State and Northwestern (in the pre-LoL trophy days). Since the Rose Bowl was hosting the National Championship game that year, Illinois had to play in the Sugar Bowl, where they lost to Nick Saban's LSU team.

QB Kurt Kittner had an outstanding season, and, with the help of WR Brandon Lloyd and Walter Young, threw for 2994 yards. David Diehl was the leader of a rock-solid O-line. CB Eugene Wilson had six interceptions and was a second-team All-American. LB Jerry Schumacher led the team in tackles.

Enough with the background, let's click on and see who won! 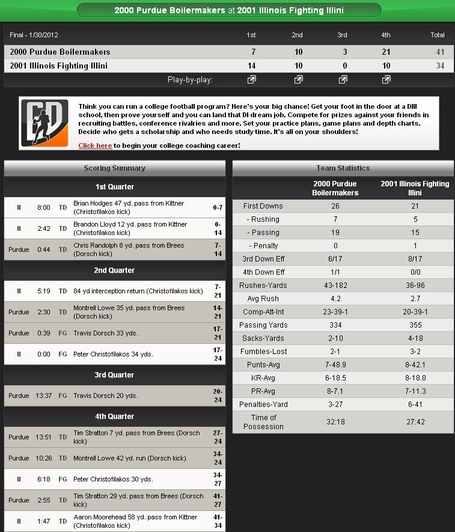 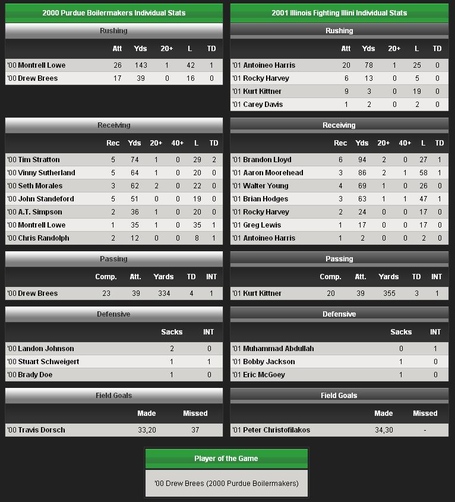 Illinois got off to fast start in this one, as the Illini struck first and second blood with Kurt Kittner TD passes to Brian Hodges and Brandon Lloyd. Purdue got on the board late in the first quarter, but followed that up with a Drew Brees pass that was intercepted and returned for an Illini TD. UI took a 24-17 lead into halftime.

The third quarter was pretty uneventful from a scoring standpoint, but the fourth quarter was anything but that. Purdue scored two TDs to take the lead within the first five minutes. Illinois managed a FG, but the Boilers struck back to build a 14 point lead with under two minutes left. The Illini managed to get another TD on the board, but it wasn't enough.

Both Brees and Kittner had pretty solid games, throwing for over 300 yards with an interception each. Purdue RB Montrell Lowe had an impressive game, highlighted by his 42 yard touchdown run in the fourth quarter. In a fairly even statistical game, Purdue's edge in punting distance and Illinois' two lost fumbles may have been the difference in this one.

Here's a look at the ATS1996BTFT bracket after this contest: 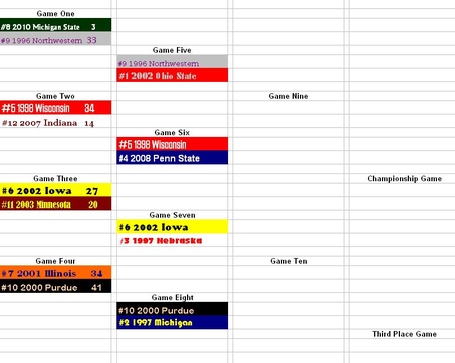