The Curious Case of Brian Ferentz

Share All sharing options for: The Curious Case of Brian Ferentz

I never have been a huge fan of nepotism. I grew up in an extremely small town in Nebraska and I went to an extremely small school that was actually getting kids from lots of other small towns. No matter what sport, activity, club, or group that you joined, you had to know going in that if you had someone with a family name involved, you were most definitely not going to be the first picked. Now, I will be the first to tell you that I was never going to be picked first regardless, but I am trying to make a point here.

The thing is, generally speaking, it kind of sucks when family members give preference to other family members. So when Iowa filled one of its coaching positions with Kirk Ferentz' son Brian, I was a little skeptical. Sure, he has some pretty good credentials that include working for The Hoodie in New England as an Offensive Line coach and Tight Ends coach, but was he really the most qualified? That is hard to really judge at this point, but as many Iowa fans have pointed out, this was maybe one of the best hires of the offseason. And if not the best, then it is certainly the most interesting hire. Can Brian shake things up? Did Kirk know he needed someone on the staff who could talk back a little? Is Iowa coaching finally branching out of the normal coach speak? Well, let's see what the evidence says, shall we? 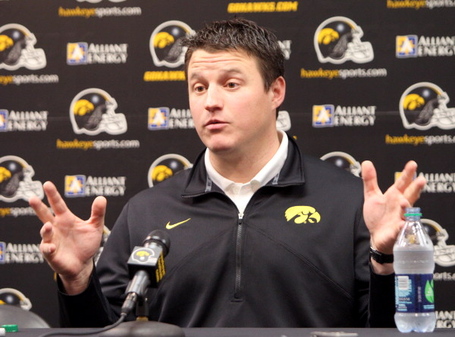 Who exactly is Brian Ferentz?

Brian Ferentz' story is pretty much exactly how you might imagine. He played for the Iowa Hawkeyes, and by default he played for his dad, from 2001 to 2005. While I have not found out a ton about his playing career, he at least started at guard in 2005 and leveraged whatever impact he had on the field that year into tryouts as a free agent in the NFL the following year. He played in the league for a couple of seasons but realized his real talent in 2008 when he got a job as a scout for Bill Belichick. Moving up the ranks pretty quickly, he ended up as an Offensive Line coach and then the Tight Ends coach for the Patriots and had the joy of coaching Aaron Hernandez and Rob Gronkowski in a scheme that pretty much featured the pair exclusively.

And so, last year when the Hawkeyes were looking for a new Offensive Line coach, who was a better fit than Brian? That is a pretty fair question considering he really only had a few years of experience and he got a nice payday, but seriously. He had deep ties to Iowa football, obviously he called Iowa City home, and he had the same coaching mentality as the head coach. Talk about a match made in heaven. Of course, you could of read most all of this on Wikipedia. The real questions come next.

What does Brian Ferentz really bring to the table?

This is kind of a loaded question and it has a lot of different answers. While he certainly has a new recruiting edge with his fancy NFL roots, I often wonder if he is still too young to have the scheming background to really make a difference yet. Sure, he can work with Greg Davis and probably help make some great adjustments, and it can't hurt that he grew up in a household that revolved around football, but I would still argue that the Xs & Os are a little rough and not why Iowa hired him in the first place.

I mentioned on Tuesday that the biggest thing you think of when you think of Iowa football is consistency. What I meant by that is that when you think of Iowa football, you very often think boring. It's not necessarily fair, and Iowa has had some flair for the dramatic at times, but usually, the culture is very blah. It's not about having fun so much as it is about doing things the right way and following a prescribed way of doing things -- more specifically, it's about doing things the Kirk Ferentz way. After a decade of Norm, KOK, and KF, maybe the team had fallen into a rut.

Brian, on the other hand, has a unique position now. First off, he's extremely young. At a shade over 29 years old, Brian is situated to move up the ranks if he so chooses, but he also is able to still kind of relate to 18-22 year old kids. Heck, with the way recruiting is going, he is probably the only one on that staff who remotely understands this strange world of technology and worthless attention spans is. We will get to Brian's twitter account in a moment, but it is worth mentioning that having someone young on staff really changes the dynamic of a team.

One of my favorite bands is Punch Brothers because I pretty much think Chris Thile is the most amazing musician in the world. He was being interviewed a little while back by Spinner.com and he had this quote about having someone young in his group:

Well, Paul, he keeps us fresh. That cynicism that creeps in is totally poisonous, even though it can also help. Again, you want to keep a balance between that wide-eyed wonder and reality. It's the difference between understanding what you're seeing and being amazed by it. And I love the amazement that Paul brings to the band. He reminds me to be excited. I mean, I'm excited by nature, but I can get dark about music. Occasionally, I might say, "Ah, what's the point when Bach already did it all?" Paul certainly helps to keep me fresh. He's bursting at the seams with ability and talent.

Sure, Thile was referring to bluegrass, but I think the same principle applies. Brian brings that excitement of coaching players up back to the table. He's not nearly as cynical about NCAA regulations, AIRBHG, the media, and even football. Energy is an underrated thing and from every interview I've read or seen about BF (I think that's his new moniker) just seems to be filled with that amazement. Also, Kirk Ferentz is Chris Thile in this analogy... Not sure how I feel about that.

Still working to find future #Hawkeyes. We will not be deterred. #PreparingToBeTheBest

Why should anyone outside of Iowa City care?

So this is where I'll land. This is a Big Ten site where we all come together and explain why one team sucks and another doesn't. A piece about an assistant coach usually is not really all that important in the scheme of things because assistants don't really win games, especially assistants who aren't the DC or OC. The thing is, I think BF is different. One of the things that I've seen in Iowa games is that Kirk Ferentz often is his own worst enemy. He coaches up recruits and has proven that there is talent on both sides of the ball. His conservative nature and extremely buttoned up culture makes for some low morale decisions and you can often feel it on the faces of his players.

I do not believe that BF is going to really argue with his dad on the sideline, but you better believe he may be the only coach who at least is willing to question the status quo. I see him as the new energy guy and someone who could fire up anyone. How do I surmise this? I mentioned a bit ago that BF has a twitter account ,@CoachBFerentz, and he is not shying away from the public. I mean, it's still your typical coaching account, but it's more than anyone else has done. BF is slowly making a name for Iowa football and that is a huge part of connecting with recruits.

Sometimes the difference between a close win and a loss is having players who actually love what they're doing. I'm not questioning Iowa's approach over the years because Kirk has been more or less successful, but he also has never gotten to the Rose Bowl. I think that this could change with the shakeup he had on the staff. After a while, things get stale. That is true of pretty much everything in life. When we become extremely familiar with what we have, we tend to overlook the potential. Having a guy like Brian on staff might just be the trigger for the next era of Iowa football. How will we know for sure? Well, as they say, only time will tell.