It's time for the second round of the ATS1996BTFT. The 2002 National Champion Ohio State Buckeyes, got a bye to the second round and are facing off against 1996 Northwestern, who dominated 2010 Michigan State in the opening game. As always, the game was simulated on a neutral field on Whatifsports.com. For a more detailed explanation of the games, click here.

The Wildcats, led by Darnell Autry on offense and Pat Fitzgerald on defense, had a pretty great year in 1996. They were Co-Big Ten Champs with Ohio State and earned a trip to the Citrus Bowl for their trouble, where they were beaten by a Peyton Manning's Tennessee team. Northwestern won the right to face the #1 seed by absolutely crushing 2010 Michigan State in the first round.

The 2002 Buckeyes beat everyone in their path on their way to the National Championship game. They had a few blowouts, but there were a lot of close games that OSU managed to pull out. Illinois took them to OT, and their wins against Cincinnati, Wisconsin, Penn State, Purdue and Michigan were by less than a TD. In the championship, Ohio State beat a heavily favored Miami squad in double OT.

2002 OSU had a great defense, led by five players who were drafted that year: Mike Doss, Kenny Peterson, Cie Grant, Matt Wilhelm and Donnie Nickey. Chris Gamble led the team with four interceptions, and A.J. Hawk had a great freshman season at the linebacker position.

On offense, RB Maurice Clarett made his only college football season a great one. He racked up over 1200 yards rushing during the season, while averaging 5.6 yards per carry. He was named Big Ten Freshman of the Year. Craig Krenzel was the quarterback of the ball control offense, and his main targets were Michael Jenkins and two-way player Chris Gamble. 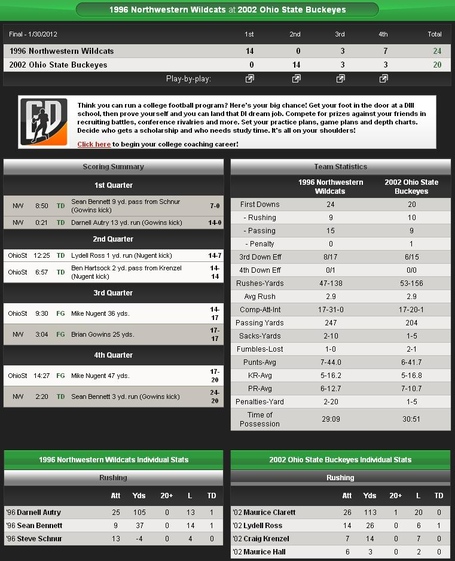 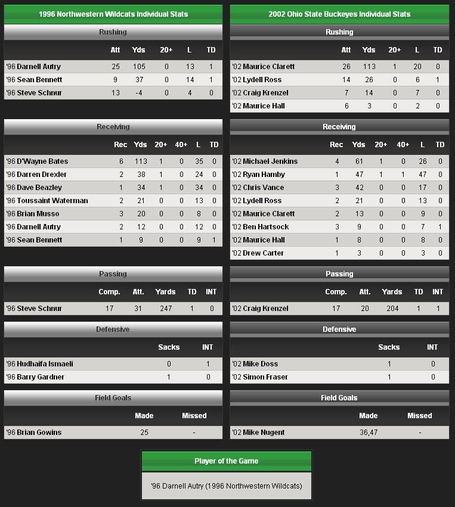 Northwestern got off to a great start in the first quarter, with rushing touchdowns from Darnell Autry and Sean Bennett (who transferred from Evansville after they disbanded their football team). OSU struck back in the second quarter with a rushing TD from Lydell Ross and a two-yard TD pass from Krenzel to Hartstock.

In the third quarter both defenses held their ground and the only scoring came on field goals from Mike "The Motor City Madman" Nugent and Brian Gowins. Early in the fourth quarter, the 2002 Buckeyes took a three-point lead with another field goal. The score stayed 20-17 until Sean Bennett scored another TD with 2:20 left.

The Buckeyes couldn't answer and 1996 Northwestern has pulled off the upset of the tournament. It was a close game with almost even time of possession. Krenzel was amazingly accurate, but his one interception may have been the difference in such a close contest. Ohio State fans shouldn't be too mad about this outcome; their consolation prize is a real crystal football sitting in a trophy case in Columbus. 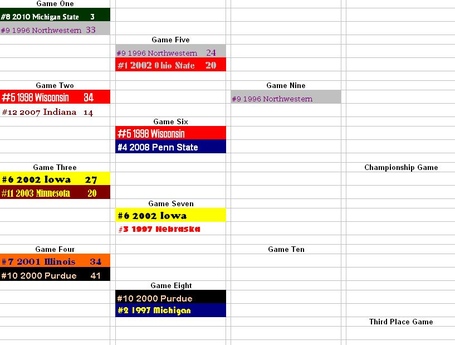