Share All sharing options for: A Sports Deployment Memory 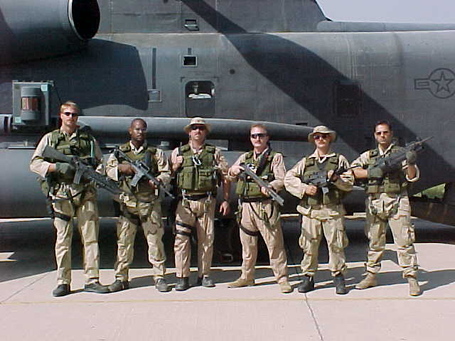 Today is a day that has a very special meaning for me. For a lot of us, it's a day off from work, the unofficial beginning of summer, and a long weekend. This year, by the time this posts, I'll be on a lake in Northwest Ontario, far away from the Internet or cell phone reception, fishing with my stepdad, brothers, and friends. Hopefully, many of you will be doing something as meaningful to you with your family.

That's wonderful, it really is. But the reason we can do stuff like that is because a lot of men and women--far too many--paid the ultimate sacrifice to secure the blessings that this great country has bestowed on us. In many ways, enjoying a simple thing like a beer and a cookout might be the best way to pay tribute to these men and women, for when you get right down to it, it's the simple things that make the sacrifice worthwhile.

Earlier this month, the mothership put out a request from veterans. They wanted favorite sports stories from when people were deployed to put on the respective SB nation YouTube channels, and Graham asked what I thought about doing one for OTE. I know I have a face for radio, so a video was out, but I contemplated writing a story. So here's mine:

For those of you that don't know, I spent 22 years in the military, split between the Air Force and the Army. Most of my time was spent as a helicopter pilot, flying CH-47D Chinooks in the Army, and the MH-53J and M PaveLow for the USAF. On September 11, 2001, I was a pilot with the 20th Special Operations Squadron, based out of Hurburt Field, FL. Our flight was on alert for any real world contingency, and as it became evident that this was a terrorist attack, we knew we were going to war.

We were one of the first units to deploy after the attacks, and we landed at our first operating location on my wedding anniversary. Yay me. We were cutoff from the world--as a special operations unit, we weren't allowed phone calls home, our families weren't allowed to know where we were, that kind of deal.

Because I was in Special Operations, I can't talk about a lot of what I did, but I will tell you I'll never forget my first combat mission, the first time I was shot at, the first American KIA's that we had to pick up and bring back to base for their long journey home--or the first guys we swooped in and picked on a Combat Search and Rescue. And I'll never forget a lot of other things, either.

Some I don't want to forget, some I'd give anything to forget. But I really was on of the lucky ones. I came home, and I've had a pretty productive post-military life. If by 'productive' you mean general jackassery writing on sports blogs, that is.

Anyway, in the midst of all that, troops will grasp at anything for a chance to feel normal, if only for a little while. Some guys read, some guys write, some listen to music, some play video games, or some combination. For me, it was the Ohio State-Michigan game in 2001. By the time The Game rolled around, we had been set up with satellite TV and phones, and life had settled into a weird routine. Fly missions one night, CSAR (Combat Search and Rescue) strip alert the next, and then a night off, or mission planning for the next night's flight if there was something to do.

There were only a few people in the mess hall, and there wasn't a lot of trash talking, as I recall, as there were just a couple OSU and Michigan fans in there. I had an old OSU t-shirt I packed in my bag and had it on, and for three hours, I wasn't in that nasty shithole, getting shot at and mortared.

I was walking across campus, past University Hall, onto the Oval, and past Mirror Lake. Across campus and on to High Street, walking into the South Heidelberg and Papa Joe's arm in arm with my wife, brisk wind in my face, maybe even a few snowflakes falling.

For three hours I didn't have to think about anything other than Ohio State-Michigan, and how awesome it was going to be when I really got home. I watched Jonathan Wells dominate the first half, and I watched OSU hang on for dear life at the end of the game.

It was important to win The Game, but sports, almost as much as a phone call or letter from a loved one, connected me to home in a way that is more powerful than I can put into words. Everyone who deploys in a war zone and gets shot at has that 'why the fuck am I doing this?' epiphany at some point, or I'd like to at least I think they do. And I'd had that moment in relation to my family long ago. Don't get me wrong, sports is really secondary in my list of priorities compared to missing countless birthdays, anniversaries, recitals and holidays, but I never really saw the macro world view of 'why' until I was watching a football game. Over 100,000 people were cheering, safe and secure, with the chance of harm coming to them by a foreign enemy almost zero.

And that's really what it's all about. Being safe and free to be able to cheer for Ohio State. Or Michigan. Or to not give two shits about football. Or go to law school, or med school. Or not even go to college. Whatever path you choose, you can do it in safety and security.

So now, when I watch an Ohio State game with my OSU friends, or a Vikings game with my Dad, and I see people enjoying themselves in the stands, or I'm fortunate enough to go to the game in person, I can't help but think back to that night in the middle of war zone, when a game...The Game...helped me put things into context, once and for all.

So take a moment today to enjoy whatever it is you're going to do with whoever you're going to do it with. And know that some pretty awesome people are minding the store, ready to go all in if need be, to make sure you'll never have to.

I'm still fishing, but when I get off the water, I'm going to silently toast four brothers in arms who didn't make it home, then I'm going to hug my real brother and be ever grateful that I was fortunate enough to come home.

I'll see you guys in a week or so.