NINTH IN A SERIES: THE NEBRASKA COCKTAIL PARTY PREVIEW

In case you all had not heard the news, Nebraska joined the B1G last season and competed reasonably well with some highlights that any Husker fan can appreciate. Between the 'Biggest Comeback in Husker History' vs. Ohio State on a Saturday night on ESPN to the absolute shutdown of Michigan State in Lincoln, Nebraska gave everyone just enough to feel like there really is hope in the near future. There was also the fun little Friday after Thanksgiving game. All in all, Nebraska won 9 games despite prepping for all new opponents, joining a new conference and traveling during a grueling new schedule, and getting used to a new OC, and you can't really complain about that, right...

OTE's own Ted Glover served in the Air Force and the Army as a helicopter pilot. He put up a Memorial Day post about the most important thing he learned while serving in the Armed Forces...and what college football meant to him while he was overseas. It's one of the best things we've put on OTE. Our sincere thanks to Ted and to all those who have served or are currently serving.

Of course, Nebraska fans will be quick to remind you that you can absolutely complain about that. This is a group of fans that demands Conference Championships or at least Division Championships and neither happened last year. The funniest thing is, that for much of the season, Nebraska did actually compete for these things, but did anyone seriously think that would last. First there was the Wisconsin massacre on national TV... Still, fans were satiated by the MIchigan State game where it looked like the team figured it out and things were on the up and up. Then this happened. Another beatdown at the Big House with everything going wrong and some terrible lack of fundamentals gave fans a bad taste in their mouths. To finish with the South Carolina game just made things muddy. Really, Nebraska was a 9 win team, but how good (or bad) were they? It's hard to say definitively and that's what was so frustrating. 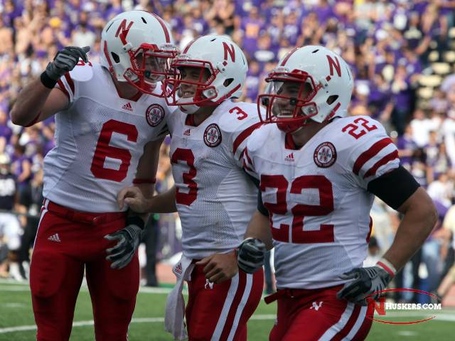 The good news pretty much starts and ends with the fact that Rex Burkhead is back. The literal do-it-all RB from Plano, TX kept the Nebraska offense going despite hiccups from first year OC Tim Beck. Also coming back this year are some explosive playmakers. Taylor Martinez, despite his arm puntiness, was pretty good last year. His numbers don't tell the whole story and there is the whole Wisconsin game, but T.Mart became a better game manager and Husker fans are hoping that his spring break QB lessons will pay dividends this Fall. Add to that a super speedy Kenny Bell (who wins the award for best afro on the team by far), two playmaking TEs in Kyler Reed and Ben Cotton, and you have the makings for a pretty interesting roster. If Nebraska learns how to throw the ball consistently next season, this will be a dynamic offense.

The bad news is that Nebraska's offense did not exactly knock your socks off last year and there is little to think that will change for sure. In games against Wisconsin, Penn State, Michigan, Iowa and South Carolina (the teams with defenses basically), Nebraska stagnated when they couldn't establish their ground game. The offensive line looked to be in shambles at times and if you didn't notice, Taylor Martinez literally looks like he is trying to pitch the football down the field like he's at the baseball diamond. One throw hits the receiver in stride and the next hits the Left Tackle.

This is a good place to point out the lack of depth at the QB and RB positions that are also extremely problematic. Rex Burkhead pretty much carried the ball every time we could have him carry the ball and this year doesn't look like that will change for sure. With the transfer of Aaron Green to TCU and the move of Braylon Heard to DB, Nebraska is looking thin at the RB position again. Of course, look for Ameer Abdullah and new recruit Imani Cross to get more carries to take the load off of Burkhead, but neither are a guarantee. At QB, Martinez is backed up by Brion Carnes. He's one of those, "All of the hype, none of the snaps," types and I am nervous coaches know he just is not ready to hit the field. Basically, Taylor cannot get hurt.

Nebraska returns 7 starters on the Defensive side of the ball. The strength of this team should be on the DL and through the LB core. Look for a breakout year by Will Compton at MLB. Last year, he played in the shadow of Mr. Tackles Everything, Lavonte David. Towards the end of the season, Compton showed huge strides in his understanding of playcalls and offensive identification. The secondary, a weakness last season, should be better by virtue of experience and understanding of Pelini's system. I would not be surprised to see Daimion Stafford get some All-Big Ten honors at the end of the season.

Well, besides the fact that this defense was ill prepared most weeks last season and are returning pretty much the same players, the ones who are not coming back had huge impacts. While he sat out pretty much everything during the conference, Jared Crick had proven himself a stud DT and his leadership will be missed. I already mentioned David. Besides tackling everything in his way, he also provided Nebraska with spark plays. My favorite moment of last season was David getting thrown to the ground by an Iowa TE (who got flagged on the play), getting up and getting angry, chasing down the TE who was 'magically' open and decking him hard enough to get the ball back. His playmaking will be missed. And while he ended the season on a sour note, Alfonzo Dennard will be sorely missed. He was the only true shutdown corner the team had and if you watched the Michigan State game, you knew how important he was to the team. Without these three playmakers at each level, there is a lot of question as to what direction this defense will go.

Lastly, it will be important to track how the defense is called in-game. I have always believed this was Pelini's system, but with Carl gone to Florida Community College, young gun John Papuchis will take over. This does not necessarily mean that the world in Lincoln is going to be turned upside down, but Carl seemed to know how to deal with Bo and I am interested to see how the new guy wants to call his game plans. Obviously Bo has his thumbprints all over the defense, but the ability (or inability) to create a new scheme will be huge in determining the succes of the Huskers this year. 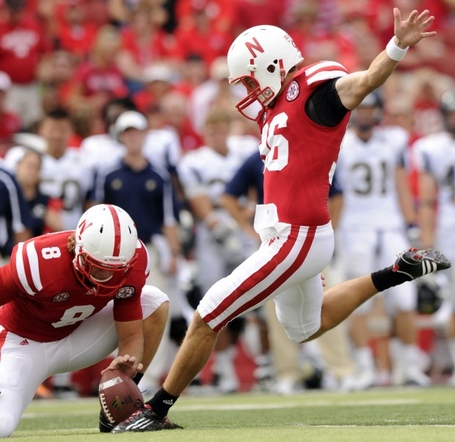 Hey, this is one of those super good news parts. Nebraska's special teams was one of the best in the conference last year with do-it-all Kicker Brett Maher won the Big Ten's Best Kicker and Punter awards last year, was First Team All Big Ten in both positions from almost every publication and major voting bloc, qualified for the Groza award, and was even an All-American by some publications. He missed a couple of kicks in the bowl game, but that can be forgiven considering his body of work last season. 19-23 on FG, 43-44 PAT (South Carolina blocked one), and averaged 44.5 yards per punt. He's good, and he's back.

On the returns side of things, Nebraska has a spark plug in Ameer Abdullah who took it to the house a few times last season. He'll be joined by either Jamal Turner or Tim Marlowe, both capable of returning kicks and hitting seams. Like I said, this is all good news.

Seriously, I like where special teams is at right now. It's a very bright outlook which means we can focus on other things hopefully.

Nebraska gets Wisconsin, Michigan, and Penn State at home this year and have 7 home games with one body bag before the conference opener. I guess from a strict, "We can do this thing" sense, that's a positive. Also, Wisconsin, Michigan State, and Northwestern have new Quarterbacks, so obviously they're going to be less strong, right? Um, sure. We're going with that as the good news.

The bad news, on the other hand, is that Nebraska still has to travel to Ohio State, Michigan State, and Iowa. With the protected crossover being Penn State and the reality that the crossovers are the powers in the Leaders, the schedule is still very difficult. Souther MIss as an opener could also be tricky, but with Fedora taking over North Carolina, they will be a much different opponent. Also, UCLA in Pasadena could be tricky. There are a lot of landmines, and Nebraska will need to be on their toes to survive the gauntlet this season.

If You're Talking to a Nebraska Fan

THURSDAY | Wildcard | The Smartest Guys in The Room