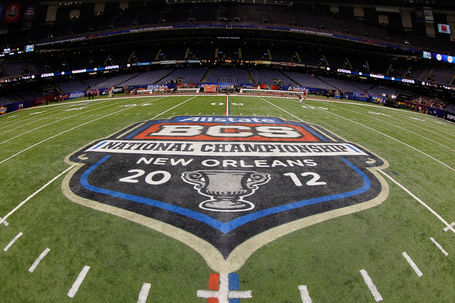 We can have playoff semifinals here, but not in Madison/Columbus/Ann Arbor/State College?

So, apparently college football is getting a playoff.

Look, the best thing about college football has been the fact that the regular season is BY FAR the best in any other sport. It's not even particularly close. You lose a game (or more likely two), and you're all but eliminated from national title contention. Every game quite literally counts....lose 1 game (or, sometimes, more than 1) and you end up without a national title.

Even in years of controversy (see: 2011), the BCS manages to accomplish AT MINIMUM it's stated goal -- a matchup in a bowl game of 2 teams that are ARGUABLY (albeit, not certainly) the top 2 teams in the country. Say what you will about the merits of a Alabama-LSU rematch (and whether Oklahoma State deserved a spot over Bama -- frankly, I believe they did), but you cannot deny the idea that Alabama was in the discussion as the 2nd best regular season team behind LSU....

Regardless, we're getting a playoff. Thankfully, it's only for 4 teams right now (and, let us all pray, it never expands beyond that....anything beyond that would ruin the regular season entirely). The big questions now are: 1) how do you select the 4 teams? And 2) where do you play the semifinals?

What this article is about, though, is the 2nd issue -- where the semifinals should be played. And below the jump, I will set forth the shockingly non-controversial (yet, for some reason, unlikely to be adopted) rationale for why college campuses should actually host college football games....

Why should we have on-campus semifinals?

WHY SHOULDN'T WE HAVE ON-CAMPUS SEMIFINALS?!??!?!?

I'm fairly certain that last year, and in 2010, and 2009, and pretty much every year prior to that over 99% of all college football games were played at on-campus venues and/or the normal home stadium of college teams (i.e. Heinz Field for Pitt). College towns both profit (through thousands of fans spending tons of money at bars/restaurants/hotels) and spend money (through increased police/traffic/fire and emergency activity) on between 6 and 9 home games every year. College towns have hotels, they have restaurants, and they tend to have a fanatical base of potential customers for a college football playoff semifinal involving the local team.

So why are we looking at neutral site semifinals?

There simply are no reasons for doing so, if the powers that be want to (a) serve the interests of fans (who cannot realistically be expected to spend on travel to a conference championship game, a playoff semifinal, and then a national title game), (b) limit travel as much as possible for student athletes, and (c) increase profits for the schools/college towns that support college football year-round. Look at Dan Wetzel's complete evisceration of the entire idea of neutral site semifinals.

Money? School sites for the semifinals would guarantee sellouts. College towns (rather than the tourism board of locales that don't support college football year-round) would receive huge influxes of cash from hosting a semifinal. On-campus semifinals would mean half the teams in the playoff would have ZERO travel costs. And, frankly, all the money in a 4-team playoff is on the television side -- we're willing to screw over fans, college towns, and student-athletes for the chump change that the NCAA will receive for bidding out semifinals to neutral sites?

Not enough seats, or remote venues? Read this article by Jason Kirk here at SB Nation. During the entire lifespan of the BCS, the average capacity of the BCS bowls was 77,363. The average capacity of the would-be home on-campus venues? 86,710. Only 3 times in the entire BCS's HISTORY would a home site with less than 75,000 seats have hosted an on-campus semi-final. And all of these college teams deal with influxes of fans/press at area hotel rooms during home game weeks.

And while some wonder how the towns will handle the surge of press for an on-campus semifinal, or whether these college venues would have press boxes sufficient enough to hold all the press, Holly Anderson at Sports Illustrated wrecked that idea entirely in this Tweet, where she noted that the Superdome last year DIDN'T HAVE A WORKING WOMEN'S ROOM in the press box for the title game. I'm pretty sure ANY college football home venue press box could do better.

Unfair advantage to host teams? So what? Under the current system, only 2 teams have a shot at the title each year. The new system gives 4 teams a chance to win the title....and you're complaining that teams 3 and 4 will have to travel to hostile home environments now? In the NFL the only "neutral" site game is the championship....and that wouldn't work for the FBS?

Bad weather? Give me a break....this is football. We play in bad weather. And it's about time that teams built to compete in harsh elements during the regular season (i.e. every B1G team, many Big 12/Pac12 teams, Boise State) get to play in those same elements during at least one round of the playoffs.

On-campus semifinal sites make sense. They support the local towns that support the sport of college football year round. It cuts down in the aggregate on costs to travel for fans, on travel time for student-athletes, and guarantees sellouts for every semi-final. They'll mean games in venues that are iconic in our sport, whether it be the Big House, the Horseshoe, Camp Randall, Tuscaloosa, the Swamp, Baton-Rouge, the Coliseum, or Austin, Texas. They'll continue to reward the top 2 teams, while still offering opportunities to win a championship for teams 3 and 4.

Don't screw this up, NCAA. Make on-campus venues a reality. Do it for the fans, for college towns, for the sport, and for the student-athletes.