(Editor's note: Our favorite Pakistani mix master, Chadnudj is recovering from a weekend of debauchery in Las Vegas. This is his column - I've posted it on his behalf.)

The original idea behind the Cocktail Party Preview was to give you something to say to a partner at your firm at a cocktail hour or on the golf course that would show you knew something about his/her team. You know, that little touch that would give you the edge in getting the job, or landing the client, or getting assigned a really great project.
Well, it's Northwestern week. Given the Ferrari-driving and Armani-wearing stereotypes, you may want to pay special attention this week, because it's MORE likely that corner-office partner is a Northwestern grad (and the golf course you're playing on his private club, and the cocktail you're drinking a Blanton's Manhattan up).....
So let's give you a starting point to Pat Fitzgerald (shocking tied as the second-longest tenured coach in the B1G behind Ferentz and tied with Bielema!) and the brainy boys in purple....
ON LAST SEASON:
The Good News is....Northwestern made a bowl game for the 4th straight season. Not a big accomplishment for most teams, but a new high standard in terms of consistency for the Wildcats. They did so by being resilient -- after a 2-5 start, they won 4 straight games to become bowl eligible. Kain Colter took over admirably for an injured Dan Persa, and emerged as the greatest "slash" offensive threat in the B1G since Antwaan Randle El: 673 yards passing (67% completion rate, 6 TDs to 1 INT and a 157.7 QB rating), 654 yards rushing (4.8 yards per rush with 9 TDs), and 466 yards receiving (with 3 TDs). And they even got that one astounding/headscratching win -- claiming definitively the "NU" moniker by beating Nebraska in Lincoln, getting a modicum of revenge for the 2000 Alamo Bowl. Oh, and they're expected to announce an ambitious athletics facilities upgrade, which surely help them improve/matchup a bit better on the recruiting trail, and also announced they'll be the only B1G team to be wearing Under Armour next year, which should excite those of you who love uniforms.
The Bad News is....by record, the Cats once again slipped. After going 9-4 in 2008, they've gone 8-5 (2009), 7-6 (2010), and then 6-7 last year. Persa was still hurt to begin the season (and never fully recovered his pre-injury speed), which derailed an arguably ill-conceived Heisman campaign. They once again lost a confounding non-conference game (at Army). Running back Mike Trumpy was lost for the season in the loss to Illinois, and A.J. Jenkins is still scoring TDs against the Wildcat secondary. What else? Oh yeah.....the bowl losing streak still reaches back to the Truman administration.
ON THE OFFENSIVE SIDE OF THE BALL:
The Good News is....Kain Colter has taken over the leadership of this team (he arguably took it last year -- see his Superman-esque performance in Lincoln), and has the foot speed/arm accuracy to be an extremely dangerous QB in Northwestern's/Mick McCall's spread system. The offensive line will be shuffled a bit, but they've got a lot of experience and are frankly huge -- all over 6 foot 3, all over 295 pounds -- and will be capably anchored by 4-year starter Pat Ward at left tackle (he played right the last three years) and sophomore center Brandon Vitabile. Mike Trumpy will be back from injury, and joined in the backfield by highly touted prospect Malin Jones, speedster Venric Mark, and Treyvon Green. And despite losing Jeremy Ebert and Drake Dunsmore to the NFL, the Wildcats' wide receiving corps may be the best in the B1G, if not all of college football -- 6-foot-3, 225-pound Christian Jones; 6-foot-2, 195-pound Rashad Lawrence; 6-foot-5, 215-pound Kyle Prater (the #2 recruit in the country coming out of high school -- he's transferred to Northwestern from USC and will likely win an NCAA appeal to get 3 years of playing time in Evanston); 6-foot-3, 200-pound Cameron Dickerson; 6-foot, 185-pound Tony Jones; and 6-foot, 210-pound Demetrius Fields are going to cause a LOT of matchup problems against opposing defensive backs/linebackers....and that's without throwing speedsters Venric Mark or even Colter into the mix as potential receiving targets. 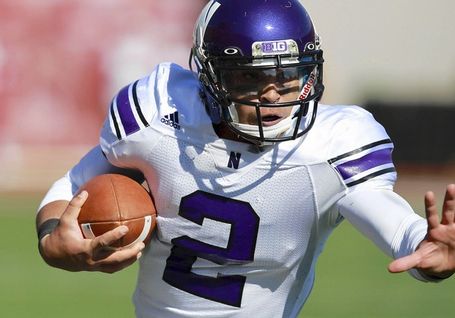 Good News/Bad News - Kain Colter looks like he wants to run for a 1000 yards.

The Bad News is....Northwestern hasn't had a 1000 yard rusher since Tyrell Sutton, and the offensive line has struggled to provide time for the QBs (in both games in 2011 and in practices this offseason) or a consistent push for the running attack. Trumpy's return from injury and Malin Jones' emergence will be huge question marks in running the ball. With Dunsmore gone, the "superback" position is very thin -- the Cats just converted former QB Evan Watkins to play superback. And questions remain about Colter's ability to stay healthy (he's undersized and runs quite a bit) and arm strength (while accurate, he lacks the "power arm" that could take the Northwestern passing game to the next level), and whether Kyle Prater will get to see the field this season (see: NCAA appeal).
ON THE DEFENSIVE SIDE OF THE BALL:
The Good News is ... A.J. Jenkins graduated? In all honesty, the Northwestern defense was a disaster last year....but they did eventually see some improvement as the season went on and some younger players got experience and a chance to learn on the job -- specifically safety Ibraheim Campbell, who was did a great job as a redshirt freshman. The defensive line looked drastically improved in spring ball, especially Tyler Scott, Daniel Gibson, and Chance Carter. The linebackers are young but faster than previous editions. Overall, the defense is MUCH deeper than ever before and much faster than ever before, which bodes well for a unit that will see multiple redshirt freshmen/sophomores competing for playing time. And in the offseason, Northwestern nabbed its highest defensive recruiting class in recent memory, highlighted by ESPN Top 150/Rivals 4-star DE/LB Ifeadi Odenigbo, DE Dean Lowry, and DT Greg Kuhar.
The Bad News is .... the Cats lost 3 starters in an already weak secondary to graduation. While depth and talent continue to improve, the Cats still haven't attracted enough top-flight talent to Evanston to man an effective pass-rush and secondary (although maybe this latest class is a sign things are changing). Their defense surrendered an average of 27.7 points and 407.7 yards per game last season, and seemingly were incapable of getting off the field on 3rd downs. And if they slip up this year, the calls for Mike Hankwitz's head are going to get louder from a fanbase that is becoming disenchanted with struggles on defense.
ON SPECIAL TEAMS:
The Good News is ... there is good news! Venric Mark is a legitimate weapon as a kick returner/punt returner, and junior Brandon Williams has done a great job punting (including one 77-yarder versus Minnesota), helping the Cats to have one of the lower punt return averages allowed in the NCAA. Coverage on kickoffs/punts was generally pretty good (save one huge runback given up against Michigan State).
The Bad News is ... the Stefan Demos/Amado Villarreal era must have scarred Fitz permanently, as he rarely asked his field goal kickers to attempt anything over 35 or 40 yards. It confounds many fans that our field goal kicking (and kickoffs) aren't better than they are. Special teams is one area that Northwestern could use great play from to cover for a weak defense....somethings were good last year on special teams, but they need to be better/perfect for Northwestern to see improvement in its record.
ON THE SCHEDULE:
The Good News is . . . Northwestern's one of the few schools in the nation to be playing 3 BCS conference non-conference opponents (at Syracuse, Boston College and Vanderbilt), which hopefully bodes well for getting the Cats battle-ready for the B1G season (and for the attendance gate a Ryan Field). A good mix of potentially winnable home games (Illinois, Iowa, Indiana). And they miss three bowl teams from the Leaders Division (Purdue, Wisconsin, and Ohio State).
The Bad News is . . . Nebraska's hordes of red-clad fans are going to take over Ryan Field, and they'll be looking for revenge from last season's defeat. Tough road games at Penn State, Michigan State, and Michigan. And those 3 BCS non-conference opponents almost guarantee a loss for a Cats team that has struggled early in the season (and Vandy's really improved things under James Franklin).
IF YOU'RE TALKING TO A NORTHWESTERN FAN:
Don't mention: the bowl losing streak. The porous secondary and lack of a pass rush. Stanford's success (which makes Northwestern's relatively respectable consistency lately suffer by comparison). Our anemic (but still passionate?) fan base. The fact that our facilities are woefully behind almost every other school in the country, which hurts recruiting. The fact that Fitz hasn't won a B1G title as quickly as his two predecessors, and the team's record has dropped each year from 2008-2011.

Do mention: the fact that they've made it to four straight bowl games. Fitz's passion for the program and the fact that he'll never leave for another job because he wants to build his own legacy at his own alma mater in Chicago, his hometown. The fact that they ARE Chicago's Big Ten team, and that marketing is doing a better and better job reaching out to build the fanbase. Improving recruiting. Improving facilities (set to be announced soon). The new Under Armour uniforms. The promise of Kyle Prater wearing purple, and abusing cornerbacks on jump balls. The win against Nebraska. The growing animosity against the Cats from Iowa City and Champaign-Urbana (because you haven't "arrived" as a team until other teams' fanbases hate you).