B1G 2012 // Keeping the Enemy Close: Bitterness, Thy Name Is Nebraska

Share All sharing options for: B1G 2012 // Keeping the Enemy Close: Bitterness, Thy Name Is Nebraska

Howdy, Big Ten fans. This is typically the space where a B1G blogger jumps in to poke one of its rivals with a stick, but Nebraska being a new member of the clan and all, your local overlord decided to give the stick to a Texas fan. Which makes sense, considering that getting clobbered with blunt instruments by Texas over and over was the reason Nebraska ran away from the Big 12 in the first place.

Now, it wasn't all that long ago that Nebraska was good at football and its fans had a sterling reputation as the friendliest, classiest bunch of knowledgeable do-gooders in the country. 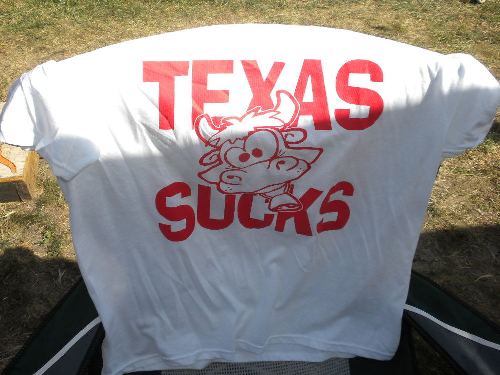 The above picture is from my trip to Lincoln in October 2010, and though you can read the full trip report for a full accounting of just how bitter and defeated Huskers fans had become from 14 crushing years with Texas, all you really need to know is that Texas' 20-13 victory over #5 Nebraska was the Longhorns' sixth in a row over the Huskers, and that across 14 Big 12 seasons, Texas went 9-1 aginst Nebraska, amassed a perfect 4-0 record in Lincoln, snapped a 47-game Nebraska home winning streak in 1998, knocked off four Huskers teams ranked in the Top 10, cost them two national titles ('96 and '99), and topped Nebraska by 4 points or less in 6 of its 9 victories, 5 of which were 4th quarter comebacks.

Even when Nebraska thought it had Texas beat...

Losing on the field to Texas over and over was the biggest source of Nebraska discontent, but that wasn't the only thing. From the inception of the Big 12, Texas drove Tom Osborne absolutely crazy, conditioning its membership in the conference on disallowing partial qualifiers, a huge part of the Huskers' historical success. Texas also succssfully petitioned to have the league offices and the Big 12 Championship Game moved to Dallas, further ingraining Nebraska's perception that the balance of power was tilted to the South.

When it was all said and done, Nebraska's grievances with Texas were a mile long, and after having entered the Big 12 a national Alpha dog while Texas was an irrelevant former power, the Huskers limped away from the Big 12 a former power repeatedly defeated by national power Texas.

All this, of course, is why Off Tackle Empire invited a fan of Texas -- rather than a traditional Husker rival like Oklahoma -- to pen this post. This is the psyche of the football program you Big Tenners have inherited. Nebraska's pride is wounded, and they have identified the source of all their ills as Texas, Evil Empire.

Truthfully, Nebraska's demise has been a little bit sad to watch -- even for a Texas fan -- like seeing that All-American, homecoming king, quarter-back-of-the-high-school-team still carrying himself like he's the town hero even though he's slowly devolved into an overweight alcoholic who can't hold a job at the local gas station.

Although it's hard not to wonder whether the last two decades of changes in colege football demography, rules, business, and style of play will mean Nebraska's best days are permanently behind it, perhaps time and distance from Texas is all the Huskers need to heal their wounds and start getting back to what made it special to begin with.

Which makes you question the wisdom of hiring a head football coach who looks like.... an angry cow.