TENTH IN A SERIES: THE MICHIGAN COCKTAIL PARTY PREVIEW

Ladies and gentleman, the Michigan Wolverines are back in every sense of the word.

They're back to beating Ohio State and making the rivalry competitive.

They're back to recruiting like they should be. Hell, they might be compiling the best recruiting classes in Michigan history.

They're back to beating Top 25 teams.

But still, this is not your daddy's perennial Top 10 Wolverine squad. The highly acclaimed and decorated trigger man is still just an overthrow away from ruining drives. 11-2 was beautiful, but it was three or four bounces away from 8-5. Mike Martin, a DT built to stop those aforementioned third down situations, is off to the NFL.

Are the Wolverines overhyped? Can Denard avoid the interceptions that have plagued him horribly? Will the Spartans continue their physical dominance over Michigan? And most importantly, what's up with Brady Hoke doing P90x in the offseason? We liked Brady the way he was.

You all know what happened. Bama Hawkeye picked Michigan to win a shit-ton of games, taking your collective flack the whole season...until they actually did play themselves into a surprising BCS spot, where they toughed out a win over Virginia Tech. Yeah, we all saw that coming.

I think there are two camps of people who look at Michigan 2011:

The first camp believes it was practically all luck. You can make a long list of things that HAD to happen for Michigan to win all those games:

The other camp sees a weakened B1G and a vastly improved Wolverine defense...and understands how Michigan went from my 6-6 preseason projection...to BCS.

Either way you spin it, any season that includes victories over Nebraska, Notre Dame, Ohio State, and Michigan State will be declared one hell of a season. 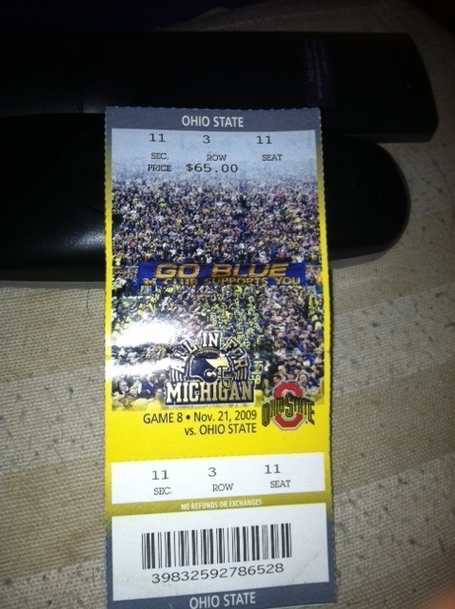 I save all these to remind myself just how bad it was. I got headbutted at this game...by a Michigan fan.

When offensive coordinator Al Borges has one too many old-fashioned's and falls asleep happily, he dreams about a pro-form offense with a ridiculously accurate quarterback and some power running. What Borges has instead is Denard Robinson. You can't take Robinson out, because he's such a terror. You can't take him out because, for all the arm punt jokes, he's got a strong arm and has blossomed into a great leader. So you ride Denard for as far as he can take you. You just hope and pray that less of the offense is centered around jump ball fade routes...

Of course that ride is a bit easier with Fitzgerald Toussaint, the nimble RB who seems to instinctively understand how to hide behind blockers, how to make the necessary amount of cuts, and just happens to have the necessary tools to accomplish these things.

Something to watch: Devin Gardner, the 4 star backup quarterback, has struggled throwing the ball accurately ever since he came to Ann Arbor. There is talk that centers around moving him to wide receiver to shore up the depth at that position.

Know this, good sirs and ladies: Michigan is going to score points because of Denard Robinson. But will they be able to score against big-time defenses, unlike last year? Will Denard's comfort level in the pocket increase? Who will emerge as the next David Molk (if that's possible)? Will Roy Roundtree play up to that projected First Team All-B1G status?

Talking about a damn resurgence. /wipes brow. Whewwwweee. I always like boiling things down to simple, easy to understand concepts. So here's one.

It's 2010, you're playing Michigan. Your quarterback takes the snap, turns to his right, hands the ball to the running back, who...goes to his left. It's a counter! Your mother, my mother, Harry Potter, and everyone else in the frickin' world sees this. Everyone except the Michigan defense. Dude picks up 23 yards before you can say "Greg Robinson."

It's 2011, you're playing Michigan. Same sequence of events, the running back gets the ball...and oh wait, there's already a dude in the backfield. Loss of two yards. Try again.

What can't be stressed enough is the importance of Mike Martin,Will Heininger, and Ryan Van Bergen in the defensive resurgence. They're all gone. This fact has been brought up over and over again. We get it. Michigan won't be as dynamic up front as they were. But the linebackers and the secondary will be veteran-laden and improved. Blake Countess, he of the Nicholas Sparks-esque namesake, my man Jordan Kovacs (he's a walk on, if you didn't know), Thomas Gordon, Kenny Demens, Jake Ryan...they've all played together for a few years now, they've tasted success, they understand the scheme.

In a departure from the RichRod years, Michigan made field goals. Brendan Gibbons, the brunette-lover, went 13-17. Just like every other facet of the program, the kicking game got better overnight. And Gibbons will be back in 2012.

Oddly enough, the kick return game was 117th in the nation in yards per return. If anyone has any background on why that's so low, I would take your ideas. Sure, Desmon Howard isn't back returning kicks, but man, YPR can boost a drive.

There's no directional Michigan or Wisconsin. Good, great, grand. But there is Alabama, Notre Dame, and Air Force in the non-conf, which is ridiculous. There's also some huge away games: @ND, @Nebraska, @Ohio State.

Where I sum things up

Let me tell you a story.

Only after the Nebraska win did I start voting the Wolverines higher. Why? Because for the first time since forever, Michigan had beat a ranked team late in the season.

It took awhile, but last year signaled a program-wide improvement. So I'm high on Big Blue, I'm high on their chances against a weakened B1G, I'm high on the defensive mentality. It's going to be one hellofa year.