As always, it's time to let the hate flow...

Well, well, well, look who found their 'cock of the block walk' again...and it only took you four years! Well done, That School Up North, well done.

Well done on beating the worst OSU team in a generation by six points and an overthrown pass by a true freshman quarterback. In your house.

Well done in beating a mediocre Virginia Tech team in the Sugar Bowl--in overtime--that beat themselves as much as Chris Brown beats Rihanna.

Well done in going to a BCS game but not even winning your division in the B1G.

Well done in winning all 63 of your home games last year.

You went through the humbling Rich Rodriguez era, and ended up 11-2 last year, and now, you think you're ‘back'.

You raise me up Michigan, you really do. And you make me laugh.

So, you're back to being 'Michigan football'. Or Manball, as your corpulent commander calls it.

But for the uneducated, just what is Michigan football?

Michigan football is beating Notre Dame in September and proclaiming yourself National Champions. It's the yearly premature ejaculation we've come to expect from you, and we wouldn't have it any other way. Really, it's okay. There's no need to be embarrassed. That happens to a lot of people. Like you and Notre Dame, depending on who wins your Yearly Clash Of Irrelevancy. And no, your girlfriend won't tell anyone. Except me. After we finished having sex. For the third time tonight. 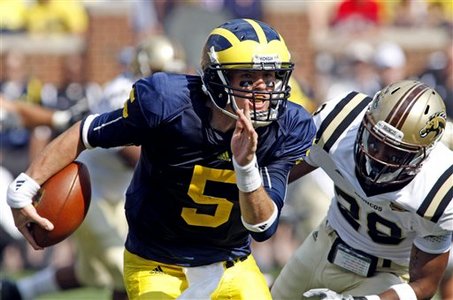 Michigan football is also proclaiming Denard Robinson the September Heisman winner, following previous September Michigan Heisman winner luminaries Tate Forcier, Darryl Stonum, and Mike 'Oh and Four' Hart. You can now find Tate Forcier in the CFL, Stonum is a train wreck, and Mike Hart is still running his mouth about how good he was against Ohio State...except on the scoreboard. Or on the field.

Michigan football is having as many major NCAA violations over the last five years as Ohio State.

Michigan football is a helmet that has that 'somebody ran over Big Bird and left him for roadkill' look to it.

Michigan football is tweaking your already godawful uniforms by dipping them in a 55 gallon drum of nostalgia ridden 1980's 1890's shit, and having them come out worse on the other end, if that was even possible. And you had the lack of foresight to do it for a BCS game, no less. For those of you who watched the then-WWF wrestling back in the day, at times you looked like the old Killer Bees tag team of B. Brian Blair and Jim Brunzell. Take a look at their warmup suits and tights at the beginning of this video and tell me I'm wrong:

Dear Michigan, the 1980's called and they want their uniforms back

Really, the best you can do is get inspiration from a mediocre 1980's tag team wrestling duo? Well, the Killer Bees were as over rated then as you are now, so I guess we should expect nothing less. They won a lot of meaningless matches, spewed a lot of hot air, were in the spotlight a lot, yet couldn't win a title. Just like your football program.

Now, get out there and kick the shit out of Directional Michigan Technical A and M State Community College of Nursing, Cubby. And then go strut like you just won the Armed Forces Bowl.

Because you do that better than anyone, except maybe Notre Dame.

Michigan football is clinging to your ‘winningest program of all time' mantra much like aging hippies cling to vinyl albums as the ‘only way to really listen to music, man.'

Because most of those wins came before the invention of the phonograph.

Michigan football is a 110,000 stadium that can be mistaken for a Missouri Synod Lutheran wake. 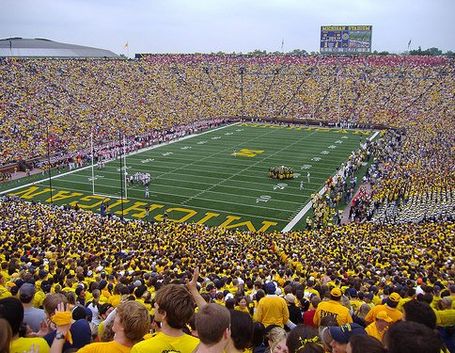 In space, no one can hear you scream...except when you lose to Appalachian State

But 10 ½ came before the Korean War. At least Nebraska has won their five four and a half during the age of television and can watch footage of them on places like ESPN Classic or the B1G Network's Greatest Games. Unlike you, Michigan fan, that has to sift through old, yellowed, crinkled Western Union cables from Great Grand Dad's scrapbook to re-live past glories:

MICHIGAN WINS GRIDIRON CLASH STOP FOOTBALLERS DEFEAT NATIONAL POWER HARVARD IN A GAME ABOUT ROSES STOP THAT YOST FELLOW IS A CRACKERJACK FIELD GENERAL STOP BOUGHT A STRAW HAT JUST LIKE HIS AND I FEEL DOWNRIGHT SCANDALOUS STOP OHIO STOP FOUND A SPEAKEASY AND TOOK A NIP OF BRANDY WITH SOME FLAPPERS TO CELEBRATE STOP OHIO STOP WILL LEAVE FOR ANN ARBOR ON THE MORROW VIA UNION PACIFIC RAILROAD STOP SHOULD BE HOME BY FEBRUARY AS LONG AS TRACKS ARE CLEAR OF MASSIVE BUFFALO HERDS STOP DID YOU HEAR ABOUT THE TITANIC? STOP OHIO STOP END MESSAGE

Wait, that's damn near all of you.

Michigan football is about having a coach that got his career winning percentage over .500 last year, thanks to 8 home games and a schedule as weak a diluted wine cooler.

Michigan football is about ‘Michigan Men'...a phrase coined by a former OSU assistant. Your current ‘Michigan Man' was born and raised in Ohio, got his 'Michigan Man' credentials stamped by being a mid-level assistant there for all of 6 or 7 years, and basically cheered for Michigan out of spite more than anything growing up...in Ohio.

Michigan football is about losing Rose Bowls--60% of them if you're keeping track.

But most importantly, Michigan football is about the Ohio State rivalry. Yeah, yeah, yeah, Michigan State this and Notre Dame that--you measure success by beating Ohio State, something you've done once in the social media era. And after last season, you saw a decade of payback coming.

Sorry the hiring of the best football coach in the country popped your bubble before you could even enjoy your first victory in damn near a decade.

Although it got a little boring watching my team kick the ever loving shit out of your team for most of the last 10 years, I'm glad you think you're back. I WANT you to be at your self-perceived best. I WANT you to be undefeated coming into The Game every year. Because nothing--not the birth of my kids, not giving my daughter away at her wedding last week, not winning a jillion dollar lottery, not getting a hypothetical yet eye watering blowjob from Jennifer Anniston while Halle Berry tickles my balls with her tongue***--NOTHING--gives me more unadulterated joy than watching the collective wailing and gnashing of teeth emanating from Ann Arbor when OSU hands you a defeat for the ages. Don't get me wrong, I was on the 'RichRod For LIfe' bandwagon, but watching the last few contests was like watching the Harlem Globetrotters play their lackey foils the New Jersey Generals--you knew it was going to be ugly, the outcome was decided before the opening kickoff, but at least you were going to be able to laugh at the expense of the Generals Michigan and feel like you got your money's worth.

No, this is going to be FUN. And I love the rationalization and internal deal making you're doing in terms of Urban F. Meyer--he'll quit in three years, he'll get run off when Hoke beats him twice in a row, he'll mysteriously get more ‘health' problems and retire, leaving OSU in a lurch.

And I love the ‘Hoke is a better coach' meme. I'll take Meyer 8 days a week and twice on Saturday.

Please, keep letting your recruits burn OSU recruiting letters, and by all means, keep up with the 'Ohio' thing, because when Meyer breaks it off in your ass this November, I want you to choke on it all, much like your basketball coach did in the NCAA tournament a few months back...against Ohio.

Just like your football team has done for most of the last decade.

Really, I'm glad you think you're ‘back'. Back to your hubris wrapped around three layers of ignorant jackassery, back to your over-inflated perception of your program, and back to being more over rated than the most recent American Idol winner. Because when it all comes crashing down, it will be all the more fun to watch. I wouldn't want it any other way.

Why? Because I hate you, Michigan. I hate your team, your colors, that ridiculous helmet, your stadium, your coaches, your players, your band, and your cheerleaders. You are my college football Taliban, wrapped in an al Qaeda Pita roll, and sprinkled with a heavy does of Iranian President Mahmoud Ahmadinejad spices. I wish you nothing but painful losing and misery from now until the end of time.

Fuck Michigan. Forever and ever. Amen.

***This is sports. All of that is demonstrably better than the outcome of a football game...especially the Jennifer Anniston/Halle Berry double tap, if it were to happen.