After taking a week off for vacation, the ATS1996BTFT is back. Even though they played in an inferior conference at the time, 1997 Nebraska might be the favorites to win it all after #1 2002 Ohio State was upset. Their first obstacle to cement their legacy is the 2002 Iowa team, who beat 2003 Minnesota in the first round. As always, the game was simulated on a neutral field on Whatifsports.com. For a more detailed explanation of the games, click here.

Ferentz and Friends did what they haven't been able to do in real life lately in the first round of the tournament: win the Pig Trophy from Minnesota. Iowa used a dominating running attack to pile on over 250 yards in their first round game, but the Hawkeyes also have the ability to open it up with the passing game.

The 1997 Nebraska Cornhuskers were simply dominant. A win at #2 Washington set the tone for the season, and only two of Nebraska's wins were of less than 13 points. One of those was the Missouri game, which Nebraska won in OT after this play tied the game:

After that scare, the Osborne Supremacy rolled over Texas A&M in the conference title game and beat Tennessee in the Orange Bowl (giving Peyton Manning the first of many postseason defeats). They were ranked second in the AP poll (behind future Legends Division members Michigan) and ranked first in the USA Today/ESPN Coaches Poll. A win here and a 1997 Michigan win against Purdue in the next game could set up a semifinal matchup that would decide once and for all who had the better team in 1997. 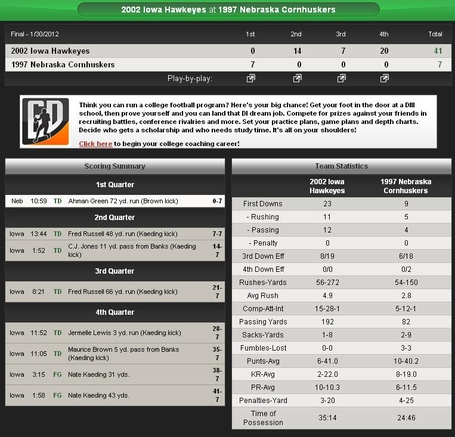 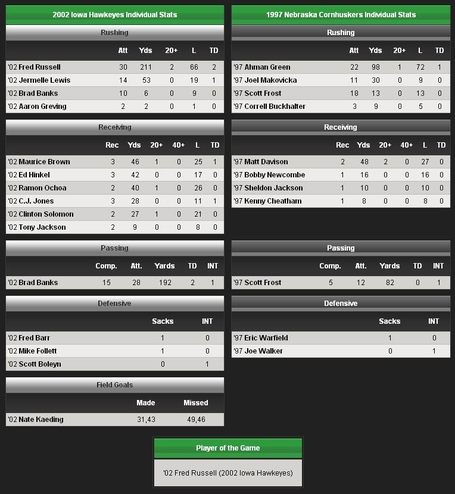 I think this result was more shocking than the Northwestern upset over Ohio State a few weeks ago; at least that game was close. Nebraska drew first blood with a 72 yard rushing TD. After that, it was all Iowa. At the half, Iowa only had a seven point lead, and a 14 point lead going into the fourth quarter.

The fourth quarter was a bloodbath. The Hawkeyes scored early in the quarter and followed up a UN-L turnover with another quick score. Nate Kaeding tacked on a couple of late field goals to add insult to injury in the closing minutes.

The oddest thing in this game is the way Iowa kept the Nebraska running attack under control. After averaging over five rushing touchdowns a game in real life, they only managed one in this game. That TD accounted for almost half of Nebraska's rushing output for the game. The three lost fumbles surely didn't help out.

In contrast to Nebraska, Iowa's ground game was spectacular. Fred Russell ran for over 200 yards and earned his second Player of the Game award in this tournament. 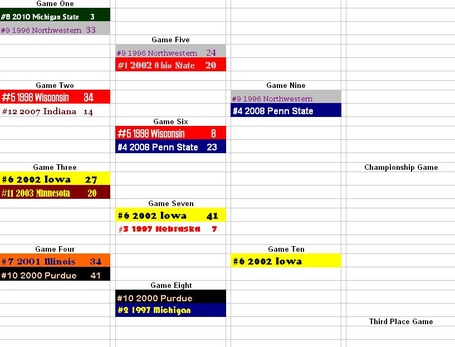