This week's installment pits the Drew Brees led 2000 Purdue Boilermakers against the undefeated 1997 Michigan Wolverines, led by Heisman Trophy winner Charles Woodson. Michigan is the last standing National Champion in the tournament. Earlier in this round, both 2002 Ohio State and 1997 Nebraska were upset. The games are simulated on a neutral field on Whatifsports.com. For a more detailed explanation of the games, click here.

In Drew Brees' final season at Purdue, the Boilers finally made it back to the Rose Bowl. In the first round of this tournament, Purdue managed to beat Illinois in the highest-scoring game so far. Can the Boilers pull off the third straight upset of a National Champion in the second round of the tournament?

The 1997 Michigan Wolverines were the first Wolverine team in almost fifty years to win the National Championship. They were led by their great defensive unit, who gave up an average of only 9.5 points per game. Iowa was the only team that managed to surpass the 20-point mark. DB Charles Woodson won the Heisman and DE Glen Steele was a first team All-American. The offense was led by Brian Griese (son of Purdue legend Bob) at QB and Big Ten Freshman of the Year Anthony Thomas at RB.

This matchup is a classic offense versus defense showdown. Can Michigan shut down Purdue? Can the Boilers score enough to get past the Wolverines? One of these National Champions is bound to win a game, right? 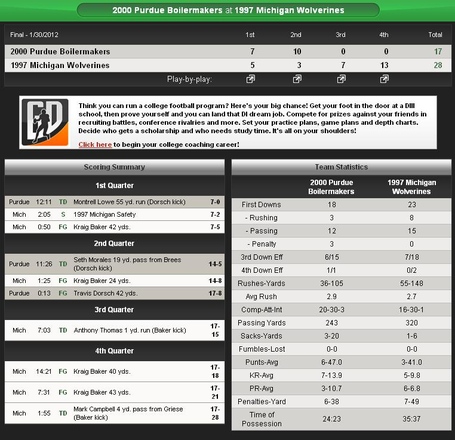 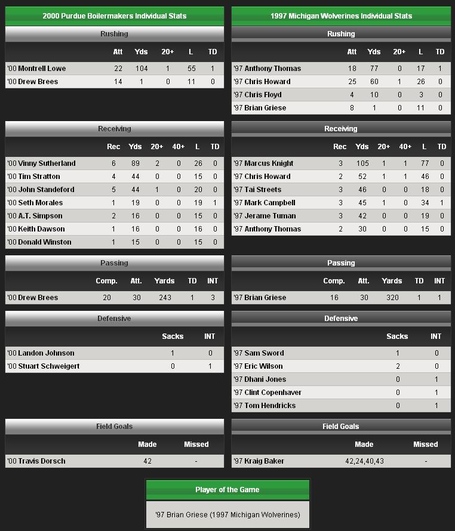 The 1997 version of Lloyd Carr must have given a heck of a pep talk to the defense at halftime. After letting Purdue score 17 in the first half, the Michigan defense clamped down and shut out Purdue. The offense also finally came to life; Michigan managed two TDs and two FGs to put this out of reach in the second half.

Brian Griese managed to win the Player of the Game Award; I think Michigan Kicker Kraig Baker deserves it for his four field goals. Drew Brees and his three interceptions certainly didn't deserve it. 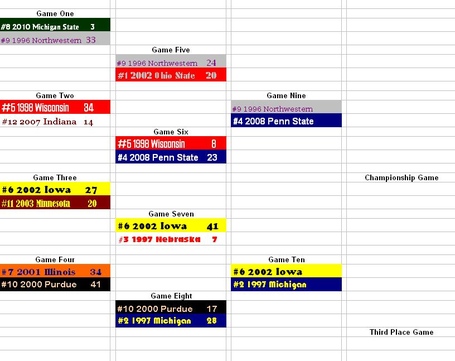