Maybe it's growing up a Gophers fan and attending Northwestern, but I'm used to see more losses than wins. I was in the stands (Section 201) of the Metrodome as the Goofs embarrassed themselves against North Dakota State in 2007. That and Bama Hawkeye's great idea of the All-Time Big Ten Football Tournament got me thinking: who's the worst? Who sucked SO much that their futility deserves to be proven in a tournament?

Unfortunately, since What-If Sports only goes as far back as 1996, we lose a few of the gems of Northwestern football from the Dark Ages of the prior half-century, but there's plenty of lulz, WIN FIGHT TRY, and water-skiing goodness to go around. So we plow on through, desperately seeking our ultimate lovable losers.

Sorry that there's no handy format like Bama's post; I'm not nearly as blog-savvy or creative as most of you. Instead, here's what you have:

So here's the bracket! Tell me what you think. Did I make any egregious errors? 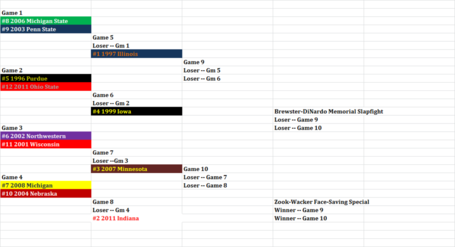 I'll admit now that making the decisions to seed Nebraska against Wisconsin, Northwestern against Michigan, and Michigan State against Penn State was tough. But take a look and tell me who you like. Maybe it's just me; I can somehow sense that in a Brewster-Turner final (I'm taking the chalk), there will be plenty of yuks to go around.