Lest you so quickly forget, this just happened. So, we continue. Remember, every game will be a one-game simulation on What-If Sports. All the rules and initial thoughts can be found here. If you didn't need a refresher, read on. Who will join 2003 Penn State as a one-loss team in the second round? Let's meet the contestants:

The Jim Colletto era would come to an end after the 1996 season, which saw Purdue limp to a 3-8 finish. It wasn't pretty from the get-go, as 6-6 Michigan State shellacked the Boilermakers 52-14 and then-#9 Notre Dame blanked them 35-0. Lest you think this season was a total waste, Purdue stunned another #9, Michigan, 9-3 in West Lafayette. Before students could wake up long enough to storm the field, they were slinking out of Ross-Ade after a 33-16 embarrassment at the hands of Indiana to end the season. The lulz came often, as Purdue allowed over 3 sacks/gm, converted under 32% of third downs, and used three quarterbacks en route to averaging just 17.6 ppg. 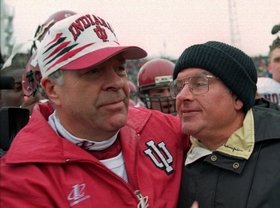 Here, Jim Colletto longs for the mediocrity of Bill Mallory as his tenure at Purdue draws to a close. Note the wistful gaze of a coach with a 21-42-3 record.

Another loss to Purdue. Luke Fickell as head coach. Herp-a-derp-a-derp about Jim Tressel, Terrell Pryor, and golden pants. The 2011 season was not exactly a bundle of roses for Buckeye fans, and it ended on a 4-game losing streak in the Gator Bowl. The well-detailed woes of Ohio State 2011 need no rehashing here, and I will only add, from my years watching the Gophers and Wildcats, that if my worst season was 6-7 with a bowl loss, ... I wouldn't have much to complain about. But such are not the standards for Ohio State, and this squad will suffice as their worst team since college football started.

One of my favorite college mascot videos ever, shared just because.

It would appear that Braxton Miller will really need to get in his own way to help advance the Buckeyes to the next round... But color me surprised if Jim Colletto doesn't stumble his way into a showdown with 1999 Iowa: 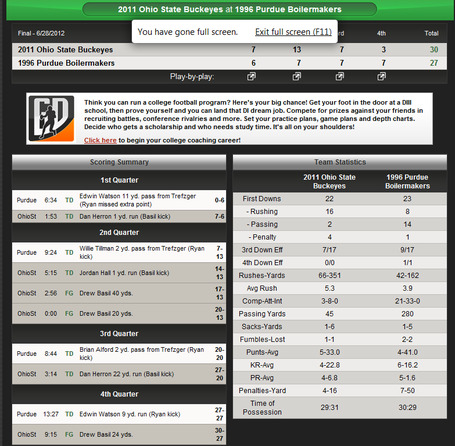 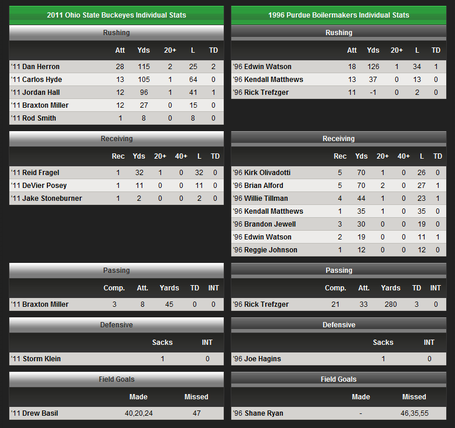 Woof. In a game I personally thought would be a two-score game if Purdue could keep it close, Ohio State needed a 24-yard FG from Drew Basil to vault them to victory. Shane Ryan distinguished himself with three missed field goals (though the 55-yarder was presumably from distance at the final gun), and Braxton Miller went a whopping 3/8 passing while only running for 27 yards on 12 carries. Keep calm and run Dave, indeed (thanks, 11W). Not to be outdone, Purdue found a way to narrowly win the battle of time of possession while still allowing Fickell's Buckeyes to run the ball 66 times for 351 yards. Oof.

Goat of the Game: Shane Ryan, whoever the hell that is. 0-3 on FGs will not make a good name for yourself.

Runner-up Goat of the Game: Braxton Miller. There's just managing a game (to his credit, no turnovers), and there's that. 3/8 passing for 45 yards and 12 carries for 27 yards. 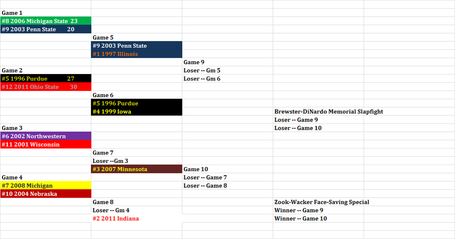 Well there you have it. Surprised? Outraged? Wondering what the hell Ohio State's problem is, continuously trying to shit the bed against a team that doesn't even exist? You'll see Jim Colletto's farewell tour again soon, taking on the maiden voyage of Kirk Ferentz's 1999 Iowa squad. Stay tuned, in the meantime, for our 6-11 matchup, 2002 Northwestern against 2001 Wisconsin.