After last week's upset of the century (at least by ATS1996BTFT seed standards) it's time for the second second round game. Posting a day late probably adds even more to the anticipation of #5 1998 Wisconsin taking on #4 2008 Penn State, in the battle to see who gets to play the Cinderella story that is 1996 Northwestern in the semis. As always, the game was simulated on a neutral field on Whatifsports.com. For a more detailed explanation of the games, click here.

The Badgers, led by All-American Ron Dayne had a great season in 1998; their only loss was at the Big House. Unlike the past couple of tries at the Rose Bowl, Wisconsin managed to beat UCLA, the #6 ranked Pac-10 Champs. In their first game they spotted 2007 Indiana a 14 point lead before Dayne and Co. took over to score 34 straight. Badger fans everywhere are hoping that the 2008 Penn State will be rusty from getting a bye in the first round.

2008 Penn State was a dominant team. Only three of their games were within a TD; their only regular season loss was by one at Iowa. The Lions blew out Wisconsin at Camp Randall and held Ohio State to six points in Columbus. The defense, led by first team All-American Aaron Maybin, held 10 of 13 opponents under 20 points, and five opponents in the single digits.

QB Daryll Clark had a great year; he had an excellent 19-6 TD-INT ratio and completed nearly 60% of his passes. RB Evan Royster averaged a little under 100 yards/game, but it was only because he didn't get a ton of carries. Against Michigan, Royster ran for a career high of 174 yards on only 18 carries (Rich Rod defense, everybody!). Deon Butler led the team in receiving and Derrick Williams was also had a solid season as a WR and running out of a Wildcat formation. 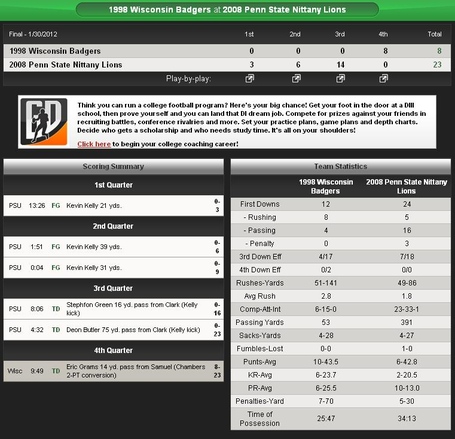 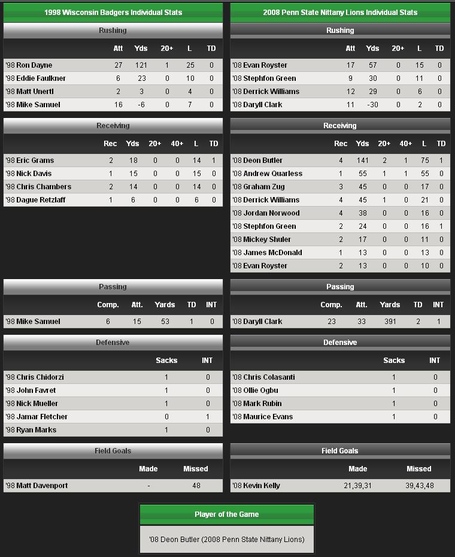 This one was never in question. Neither team scored a TD in the first half, but Penn State got on the board with three field goals. In the second half PSU scored two passing touchdowns and Wisconsin added a too-little too-late TD and two-point conversion in the fourth quarter. This game shouldn't have even been as close as it was; the Penn State kicker missed three field goals.

The difference in this game was Penn State's passing attack. Daryll Clark had 391 passing yards, 141 of those (75 on one play) went to Deon Clark. Wisconsin's Mike Samuel only managed to complete 6 of 15 for 53 yards. Wisconsin's vaunted running game couldn't get on track. Ron Dayne ended up with 121 yards, but it took him 27 carries to get there. QB Mike Samuel was credited with a rushing attempt 16 times (4 of which were on sacks) and totaled 6 yards.

Penn State dominated time of possession because Wisconsin couldn't stay on the field; 4 of 17 on third down and 0 of 2 on fourth is not good by any standards. The Nittany Lions are moving on, thanks to their passing attack and their stout defense. 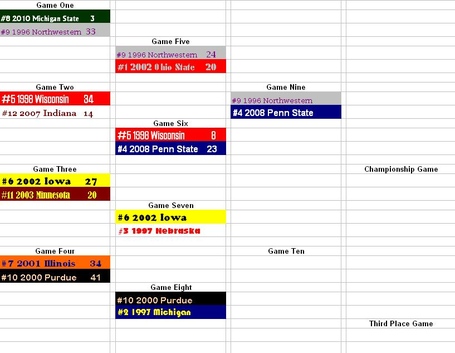