This is the story of the rivalry that just wouldn't take. When PSU began competing in the B1G conference for football in 1993 they were paired up for protected rivalries with OSU (which made sense as western Pennsylvania and Ohio are next door and nearly indistinguishable from each other) and MSU due to our shared history as Land Grant colleges. I bring my hate today to PSU today for a two reasons; first and foremost this: 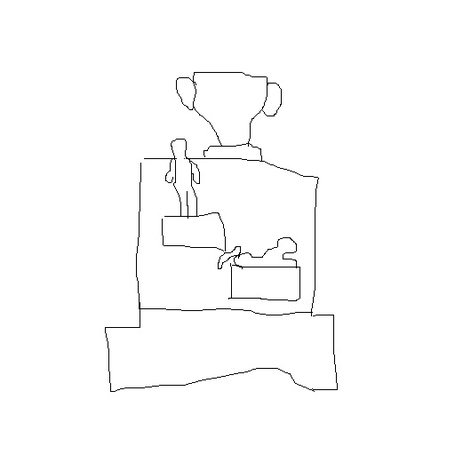 You can tell how seriously schools take a rivalry by the stakes that they play for. Based on the Land Grant Trophy, this rivalry never had a chance. Due to SB Nation's draconian new rules regarding photographs and their sourcing, I am unable to post an actual photograph of the abomination that is "the Land Grant trophy". Five minutes in MS Paint at 12:30 in the morning and I may have created something that looks better than the real trophy. Seriously. This thing is heinous. If you had the misfortune to see that "small children/corn genitalia" thing they created for the Nebraska-Iowa Cy-Hawk series it looks like Paul Bunyan's Axe or the Little Brown Jug compared to the Land Grant Trophy. Believe me, Spartans know ugly trophies...we play Indiana for a 120 year old tobacco spit receptacle for Pete's sake. So thank you PSU for entering the B1G and burdening the world with this godawful eyesore. In addition, due to B1G expansion we should get to hold onto this monstrosity until 2019 or whenever Uberfuhrer Delany deigns to allow us to play against one another again...really, we can't give the f'n thing away (I would hate on George Perles for creating the thing but he has his own special place reserved in Dante's fourth circle already).

On second thought, we shouldn't be surprised that something this atrocious is associated with Central/Western Pennsylvania. I've been to this part of Pennsylvania many times over the past 20 years, at different times and in different seasons and I have yet to see the sun when I visit there. Even once. It's like the environment inside the coal mines has seeped out and covered the world. Dark, dank, and musty. I thought the Morlocks weren't supposed to take over for another 800,000 years. Come to think of it; I've never seen the sun over the field while watching a PSU game on TV. My Nittany Lion friends: what was so valuable that it was worth risking, and losing, a bet with the Almighty?! Don't get me wrong, it seems like if you washed away the soot and grime, that you can almost see how charming these towns were back when black lung was passed down from generation to generation like we now pass down unsustainable debt-loads.

Which brings me to the second part of my hate: 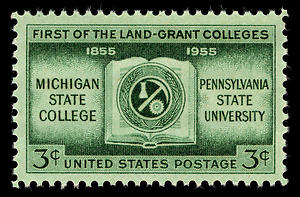 I think I'm good with this one - it's an image and not a photo.

In 1955 MSU had to share a stamp that was designed to honor the "Pioneer Land Grant College" because somebody at PSU got their knickers in a twist. Maybe they take math a little less seriously at the former "Farmers' High School of Pennsylvania" but by my reckoning MSU is the Pioneer Land Grant College. Michigan Governor Kinsley S.Bingham signed the bill creating the Agricultural College of the State of Michigan into law on February 12, 1855 (a day we celebrate as Founders Day). Ten days later, on February 22, 1855, Governor James Pollock signed the aforementioned Farmers' High School of Pennsylvania into existence. Not only was PSU not first, it wasn't even founded as a "college". Furthermore, the institution that became MSU began classes in 1857 while future PSU didn't enroll their first students until 1859.

Quick, who was on the second team to climb Mount Everest after Hillary and Norgay? It happened 3 years later and nobody remembers it as being important or considers members of that team (Reiss, Luchsinger) as significant as the primary duo. As Mr. Bobby says, "If you're not first, you're last!" MSU was first. We shouldn't have had to share the honor of being the first American College honored on a postage stamp with the residents of Mordor. Then again, we've become used to sharing honors with conference schools that don't deserve them... ehem...OSU.

As much as it sucks, we'll keep the bowling trophy and look forward to playing PSU again, whenever that happens. It's a series that is virtually knotted at 14-13-1 in favor of PSU. Total points scored by each team are separated by a single point (713-712 MSU). MSU dominated the series while both teams were independent (6-1-1) and PSU has a sizable advantage since both teams have been in the B1G (13-5 PSU).

TUESDAY | Smartest Men in the Room