It's time for the first game of the semifinals, pitting the upstart 1996 Northwestern Wildcats against 2008 Penn State. It's Darnell Autry vs. Evan Royster and Gary Barnett vs. Joe Paterno. Northwestern pulled off a big upset by taking out #1 2002 Ohio State in the last round. Penn State beat #5 1998 Wisconsin to get to the final four. As always, the games are simulated on a neutral field on Whatifsports.com. For a more detailed explanation of the games, click here.

1996 Northwestern has played very well so far in this computer simulated tournament; 2010 MSU was no match for them and the 1996 Cats did managed to beat the undefeated in 2002 Buckeyes. Can Northwestern continue their upset run and claim the prestigious ATS1996BTFT Trophy?*

*Imagine if the Land Grant Trophy and the infamous Iowa Corn Family procreated.

Ron Dayne and the 1998 Badgers were overmatched against 2008 Penn State in the last round. The Nittany Lions ran up nearly 400 passing yards on the way to an easy victory. Will it be as easy against Northwestern, or will Northwestern LB and future coach Pat Fitzgerald use his wizardly powers to send Penn State back to Sad Valley? 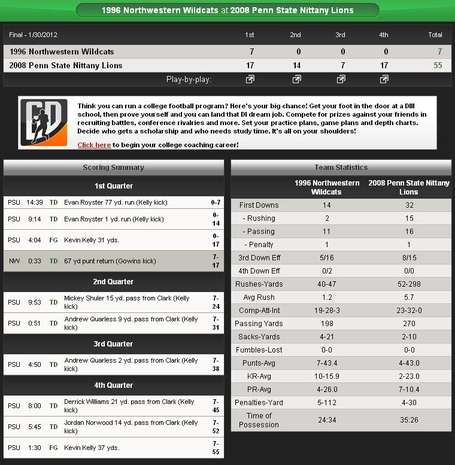 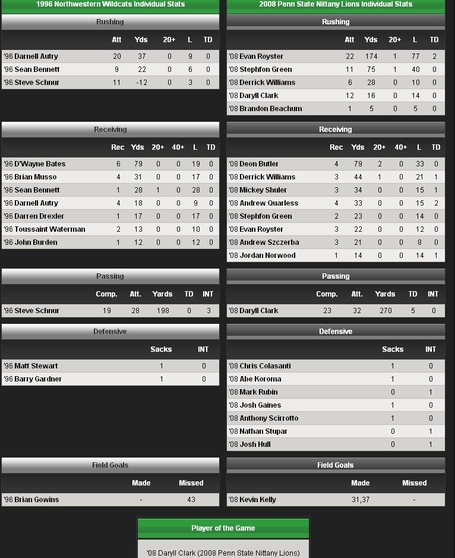 It looks like Northwestern used up too much of their computer simulated energy beating the top seed in their last game. Penn State dominated this one; their only mistake was giving up a punt return for a touchdown. Six minutes into the game, Evan Royster had a pair of rushing touchdowns and that was all they would need.

While 14 points was all they needed to win, PSU tacked on a few dozen insurance points just to be sure. They ran for almost 300 yards and threw for 270. Daryll Clark competed passes to eight different receivers and manged five passing TDs. Not to be outdone, Evan Royster had 174 rushing yards and two TDs.

On the defensive side, PSU completely shut down NU. Darnell Autry couldn't even crack 40 yards on 20 carries. Steve Schnur completed a respectable percentage of his passes, but three of them were to Nittany Lions.

The 1996 Northwestern team had an impressive run, but it ends here in a rout. 2008 Penn State didn't make the mistake of taking the Cats lightly; they earned a trip to finals with an impressive performance. 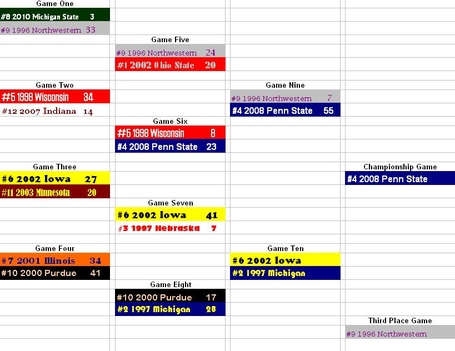