Uff da, so this is a few days late. Sorry if anyone was desperate to get on with the show; work gets in the way from time to time and produces a worn-out MNWildcat. But you all don't care about that! In case you need a crash course, here's what you missed last time and here are the rules of the game. This week, we begin our magical journey into the worst of the worst! But first lets meet our valiant loser from the first round, punching woefully beneath their weight class.

A 2/4 day kicking for Robbie Gould and a 13-33 day passing for Zach Mills doomed the '03 Nittany Lions, whose suspect run defense and shaky special teams will continue to imperil their escape from this bracket.

But now, we meet the #1 seed, a team that makes Brother Tim blush and was so bad, Indianapolis shock jocks dare not mock them...

They scored a total of 119 points, averaging not even 11 per game. They lost by two scores to 1-10 Louisville. They went four straight games in the middle of the season without scoring double digits, capped off by an embarrassing 23-6 loss to 2-9 Indiana. Conveniently, the Illinois football website archives stop at 1998 (note: all of their sports appear to, but STILL). My crack research squad, though, tells me that some guys named Mark Hoekstra and Tim Lavery combined to complete 46.9% of their passes with a 7/18 TD-to-INT ratio. Woof. Robert Holcombe was a bright spot at RB, rushing for 1253 yards, but only gathered 4 TDs.

Granted, this all may seem a tad futile, most likely eliciting a collective "meh" at the hands of U of I supporters while they waited for basketball season, but nonetheless, they were really turrible. 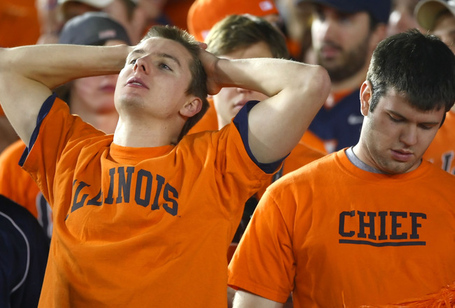 Don't be sad, bro... At least you'll always have the Chief!

Well, it doesn't look good. JoePa may save himself from further embarrassment in the bracket, although this Holcombe character could find some holes in the Linebacker U defense and make it interesting. Oh, who am I kidding? Jump on... 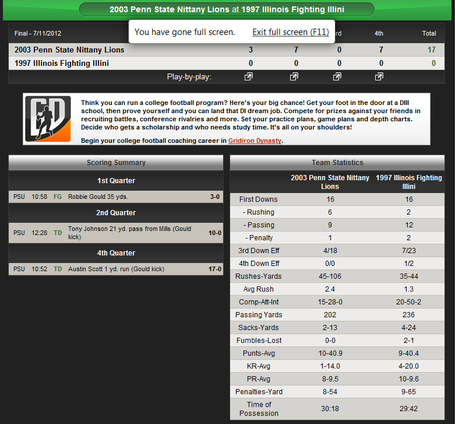 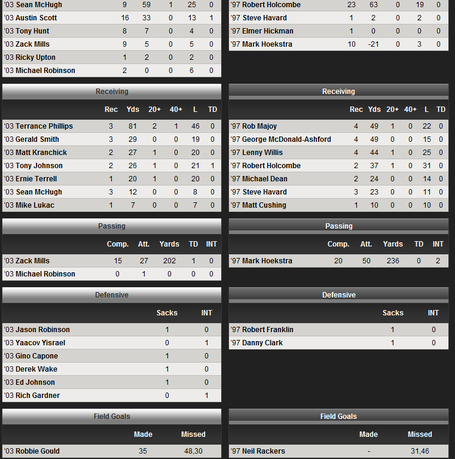 Yep. That sounds about right. The Illinois team that scored like, 12 TDs in 11 games scored...zero. A porous O-line allowed 4 Nittany Lion sacks, some guy named Yaacov Yisrael (yep) picked off Mark Hoekstra, who went 20-50 passing with 2 INTs, and Robert Holcombe was held to 63 yards on 23 carries. This game was...disgusting. I won't bore you with the play-by-play, because it was lots and lots of 3-and-outs. Nineteen combined punts, PSU going 4/18 and Illinois going 7/23 on third down, and a combined 1/5 kicking day between Robbie Gould and Neil Rackers capped off a sloppy, ugly affair.

Goat of the Game: Offense. And kickers, though I'm sensing What-if Sports is on the whole not kind to those filthy foot-users. 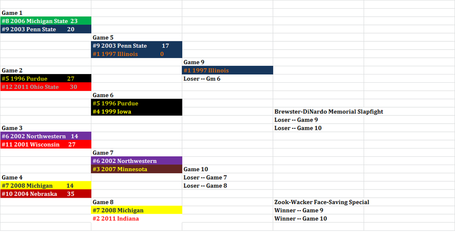 It can only get better from here for 1997 Illinois, right? They wilt into the semifinals to face the loser of '96 Purdue and '99 Iowa, and odds are eventually this team has to score a point. JoePa can rest in relative peace, at least, knowing his team will not be crowned the worst Big Ten team since college football began of the last 15 years.

Stay tuned for more laughs, some good Delany-ordained MHR hate (before it was even a thing!), and what will surely be an adventure as 1996 Purdue takes on 1999 Iowa in our next installment! Hope you're all enjoying the action.