Why The B1G Doesn't Churn Out Heisman Winners

Share All sharing options for: Why The B1G Doesn't Churn Out Heisman Winners

We're talking B1G Heisman, son, because EA Sports is working closely with SBN to get you rockin' that new EA Sports NCAA Football 2013 with some sweet Heisman options. So here's what I want to talk about.

I LOVE The Concept Of The Heisman Trophy...

Young men are just numbers, star-ratings, just another face in the college football crowd. You're our savior, says the USC fanbase, until he goes to UCLA, and all of a sudden he's not Trojan material. /ducks

But when you see a Heisman winning individual crying with joy, surrounded by his family and friends, being rewarded for bringing joy to millions...That takes me to a good spot. To watch the tremendous highlights accumulated by some of these boys, knowing that among the thousand college football players, one individual has shone as "the best"...that's special.

And let's be honest, Troy Smith may not have been the sexiest Heisman winner in history, but don't tell that to all the defenses he summarily torched in 2006. Since then, no B1G player has made a serious run at the award. Here's a list of the B1G players to place in the Top 10 Heisman voting since Troy took home the hardware:

Did any of these individual really deserve to win the award? Were any individuals a victim of the dreadful "Heisman Snub"? Some of you will say, aw hell no in regards to Robinson, because a Heisman winner shouldn't arm punt. Some of you may call Ringer a one trick pony who piled up big yards early and struggled against better defenses. Shonn Greene came out of friggin' nowhere and pretty much played to his statistical potential, but he had some very strong candidates to compete with (Bradford, McCoy, Tebow, Harrell). And Montee Ball, yeah, there's a damn good argument for Montee Ball and his Playstation numbers. But even he couldn't get a Top Three finish. 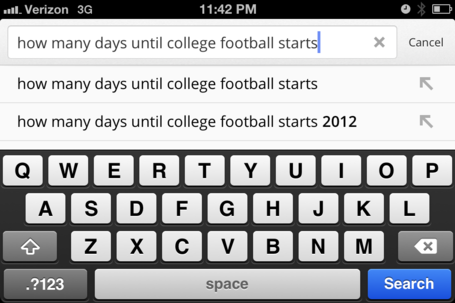 So we can make a pretty good claim that, truly, the B1G doesn't field great Heisman candidates. We don't have high-powered offenses (or maybe our defenses are just that good?), we don't have high passing yardage offenses of late, and we haven't churned out the "high hype" players from our "high hype" B1G programs. Offensive linemen don't win the award; we've got a shit ton of great offensive lineman. Defensive ends and linebackers don't win it either; we're rich in talented DE's and LB's.

I don't care about your rabble rabble, I like the hype and the experience of an individual having the season of their life.

What Can The B1G Do To Present Better Candidates?

Well, we probably need to throw the ball more and have more undefeated teams.

A Wisconsin running back plays nicely into the media's story about Wisconsin #smashmouthfootball and Midwestern values, how our running game signifies that we are traditional, small town folk. /ESPN'd. Imagine a 12-0 Wisconsin team with an 1800 yard back? Perfect.

We also need some bigger B1G arms. All these dual threat quarterbacks...not great Heisman material. Too many wounded ducks. Cam Newton had a huge huge arm (as proved in the NFL) and was also a dual threat. A Matt Barkley-esque quarterback fits into that Heisman narrative: He leads! He zings amazing throws! He looks like a Heisman winning QB!

How's Our 2012 Crop of Heisman Contenders?

Not as full of weak sauce as one would think. No one from Penn State will win the award...for obvious reasons. MSU is powerful defensively, but man it's hard to get a defensive player on the Heisman short list. Ohio State could present a feel good comeback story...and Urban Meyer does have some great history with his dual threat quarterbacks. So let's take a look at players in the B1G who have the best chance to win the award, in order of probability:

So Where Do We Go?

Well you should probably go buy EA Sports CFB 2013 and use your free time to turn Nebraska into a respected national program. Besides that, I just love talking Heisman hopefuls and Heisman history. See below.

This post was sponsored by EA Sports NCAA Football 13. Check out the video for the game below.