Well hello and happy Monday night (Tuesday morning by the time most of you folk read this) to all of you OTE readers. Hope you're enjoying your day as much as I'm enjoying my Gin Rickey. If it's morning where you are and you haven't slipped enough Bailey's in your coffee to remember what you missed last time or the rules of the game, there they are for you. Having watched '97 Illinois and '03 Penn State combine for 19 punts and all sorts of shenanigans, let's pretend that never happened and see who the winless '97 Illini will be facing in the semifinals, hmm?

In a stunningly close game, Purdue rode the (strong?) arm of Rick Trefzger (note: I'm not sure you can legally put those 3 consonants together in the English language) and the lack of an Ohio State passing game to narrowly miss shocking the world by actually doing something right. Instead, Shane Ryan gets a chance to redeem himself by actually making a field goal this game against our #4 seed:

Oof. A loss to 4-7 in-state rival Iowa State set the stage for bad things to come in the maiden voyage of the Kirk Ferentz regime. One can only assume he took it stoically and with a piece of gum between his teeth. A 24-0 shutout of Northern Illinois would be the only victory the '99 Hawkeyes tasted, as they put up lots of LAWLs and an 0-fer in the Big Ten. The QB trio of Scott Mullen, Randy Reiners, and Kyle McCann put up a gaudy line of 6 TDs to 9 INTs passing on the year as Iowa only managed to score 162 points, good for 105th most out of 114 teams, while allowing 347, placing them 98th. 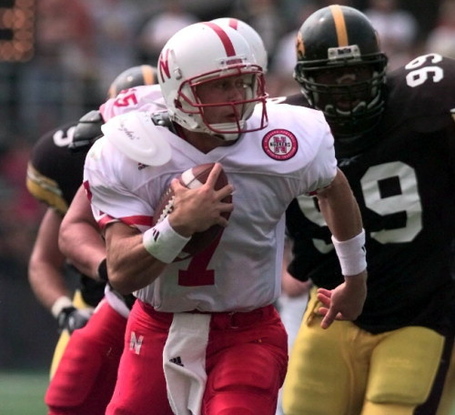 A common sight in 1999 Iowa City: the Hawkeye defense chasing after an opposing player. (thanks thegazette.com)

Looks like Purdue should win this one going away, given their most recent result, but the hate apparently is supposed to run deep in this matchup. 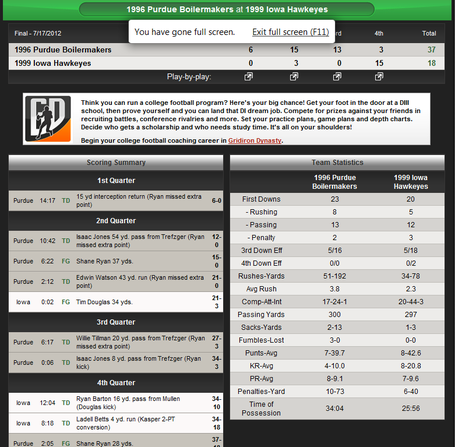 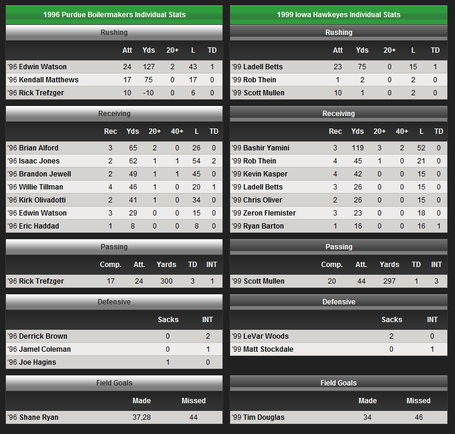 1996 Purdue had '99 Iowa down 34-3 by the end of the third quarter, and this one wasn't even close. If the 15 combined punts (seriously, these games just seem like they fit so much more play in) didn't give it away, there's even more Big Ten football: Ferentz punted twice from inside the Purdue 45 in the first half. Punting is winning, right? To their credit, Purdue tried to give Iowa chances, fumbling the ball 3 times but recovering all three times. Iowa only managed 78 yards rushing on 34 carries, though, and Scott Mullen went 20-44 with 3 INTs (and 1 TD), allowing the first Boilermaker score from deep in Iowa territory and derailing the other two drives deep on Purdue's side of the field. The Boiler secondary did let Hawkeye WR Bashir Yamini haul in two passes deep over the middle, for 119 yards on 3 receptions, but such Jim Colletto-coached pass defense would go for naught; Iowa managed somehow to lose to a school that doesn't exist.

Goat of the Game: Scott Mullen has to get this for his sub-50% passing effort and 3 INTs, including the 15-yard INT return for a TD that set the tone of the game. Shane Ryan, to his credit, tried to defend his title by somehow managing to go 1-5 on PATs, but 2-3 on FGs. 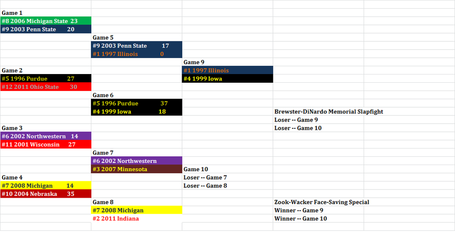 This can certainly only fuel the HATE HATE HATE from Iowa towards those train-fetishists in West Lafayette, as not even the incompetence of the Colletto-era Boilermakers could save the Hawks from advancing toward the Brewster-DiNardo Memorial Slapfight. They regress to face the '97 Illini, and the Hawks have a lot to do if they wish to claim the title of All-Time WORST Big Ten Team Ever (since 1996).

Stay tuned, though, as we have a whole separate side of the bracket to cover! Tune in sometime over the next week, as #6 '02 Northwestern and #2 '07 Minnesota meet in a battle of teams who enjoy breaking my heart, spitting on it, and urinating all over it like a drunk on New Year's Eve.