2008 Penn State has already punched their ticket for the finals. Who will join them? Will it be the undefeated 1997 Michigan Wolverines? Or the upstart Iowa Hawkeyes of 2002? Michigan took care of the Drew Brees-led 2000 Boilermakers to get here. Iowa beat both 2003 Minnesota and 1997 Nebraska. As always, the games are simulated on a neutral field on Whatifsports.com. For a more detailed explanation of the games, click here.

Iowa is looking to put a rest to the eternal debate as to whether the two teams that went undefeated in the 1997 season would have been able to handle the 2002 Iowa Hawkeyes. Iowa thoroughly dominated the Co-National Champion 1997 Nebraska Cornhuskers in the last round, and they hope to do the same to other 1997 Co-Champs today.

Michigan's defense slowed down Purdue's potent offensive attack last week and came out with a win. If Michigan can win this, they will prove once-and-for-all who the best team was in 1997. If they lose here, then the only thing we know for sure is that 2002 Iowa would have dominated the 1997 college football season. 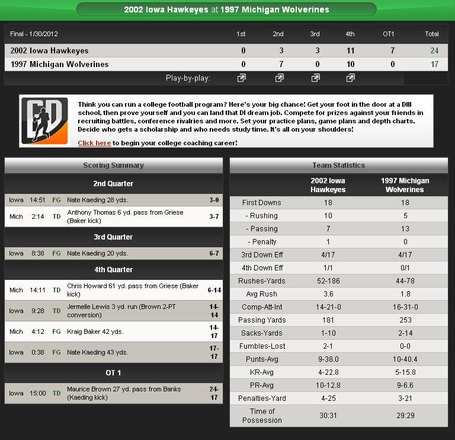 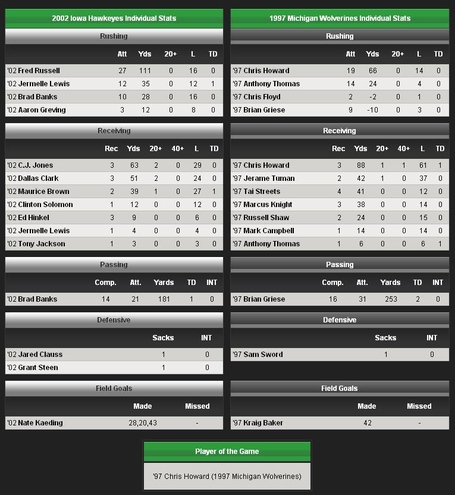 The first overtime game in ATS1996BTFT history ends with another Hawkeye victory. After battling to a 17-17 tie in regulation, Brad Banks completed a TD pass to Maurice Brown. The Iowa defense shut down Michigan on their possession and the Hawkeyes are moving on to the finals to face 2008 Penn State.

Not surprisingly, neither team scored in the first quarter. Michigan scored a late second quarter TD to take a meager 7-3 lead into halftime. Both defenses held their ground pretty well in the third quarter, with Nate Keading providing the only three points of the quarter.

Michigan drew first blood in the fourth with a long pass from Brian Griese to Chris Howard. Iowa answered with a touchdown and two-point conversion to tie it up at 14. Michigan kicked a field goal with about four minutes left that looked like it could be the game-winner, but Iowa managed to drive into field goal range with less than a minute left to tie it up. 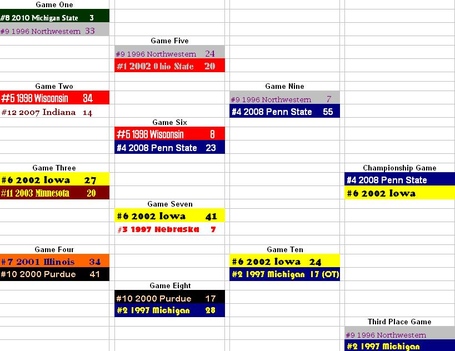 We're going to finish the tournament up this week. We'll have the Consolation Game up on Friday and the Championship on Saturday.