In honor of the upcoming Olympics, the ATS1996BTFT is having a Bronze Medal game with the losers of the semifinal games. It's sort of like the Cap One Bowl in real life Big Ten football. It's pretty nice, but you'd rather be in the bigger bowls. It's 1996 Northwestern against 1997 Michigan in a battle to see who can end the tournament as a winner. The games have been simulated on a neutral field on Whatifsports.com. If you would like more details, click here.

Northwestern looked very impressive early on in wins against MSU and OSU, but they ran out of steam against 2008 Penn State. Which Cats team will we see in this game? Will it be the spunky underdogs who took down the #1 seed, or the tired and overmatched team that was humiliated in the last round?

The Wolverines got a bye into the Second Round, so they are in the Consolation Game with only one win to their credit. Lloyd Carr from fifteen years ago shouldn't be too down about losing to 2002 Iowa; at least they managed to take it to overtime. Since it didn't happen in the '97 season, this will be the first time we see how UM bounces back from a devastating loss. It might be interesting.

Result after the jump. 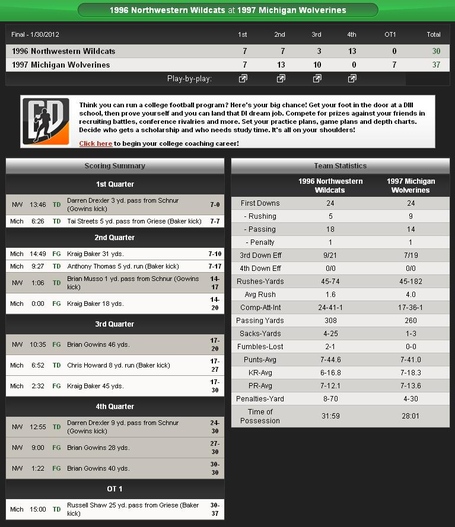 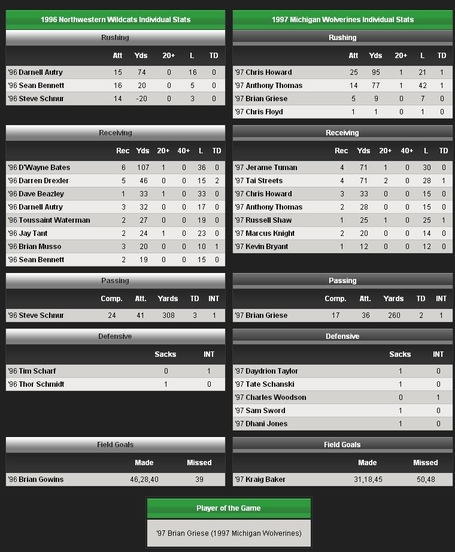 Michigan played their second straight overtime game in the tournament; this time they manage to pull it out over Northwestern. Brian Griese managed to win the player of the game, even though he was outplayed by Steve Schnur, who had to go up against '97 Michigan's legendary defense. I guess there is a bias towards giving the POG to the winning QB, but in the last game they gave it to the losing team's RB.

Michigan had thirteen point lead after the third quarter, but they managed to squander it, as the Wildcats scored a touchdown and two field goals to send the game into OT. In the overtime, POG Brian Griese threw a touchdown pass and the vaunted UM defense did their job.

Congratulations to 1997 Michigan on their Third Place finish! 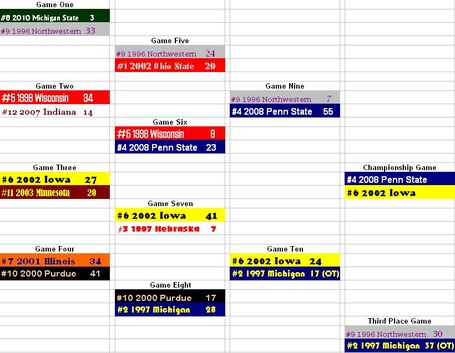