A pleasant Monday morning to each and every one of you... Need some sort of distraction from that whole NCAA thing going on today? Want to laugh at two of the Big Ten's examples of exercises in futility? Well here we go! If you forgot, here's what you missed last week and the rules of the game. Now that '97 Illinois and '99 Iowa will be meeting in the first semifinal, let's conjure up another pair of struggling squads to join them, hmm? Our third pair of quarterfinalists:

The inaccurate leg of David Wasielewski led to a mass disowning of him by Chicago's Polish community, though the upcoming marketing campaign of Northwestern football as Krakow's Duży Dziesięć Zespół is sure to pack the stands of Delany Field and Ryan Field alike. No word yet on how they would've translated Dyche Stadium to Polish, though I'm sure there's a Dutch lesbian joke in there somewhere. What were we talking about, again?

Fuck this team. Seriously, fuck it so hard. I was in the stands for Minnesota-NDSU. I told myself "Don't worry, these are just the growing pains of the Brewster Era." Fuck you, Tim Brewster. This team did some shitty things and gave up a lot of yards and Adam Weber probably threw a lot of interceptions, but I really don't care. This was the season in which my dad decided to finally buy season tickets in order to get better seats in TCF Bank Stadium, and this is the shit I watched. Fuck you, Tim Brewster. 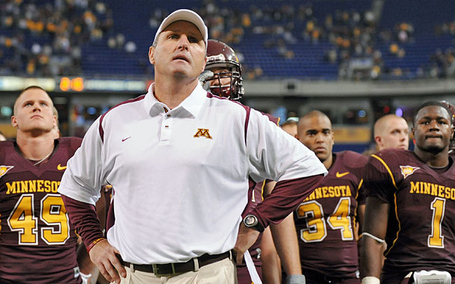 Writing about this clown has actually gotten me palpably mad.

Were we here for football or something? Jesus. Hit the jump, kids. 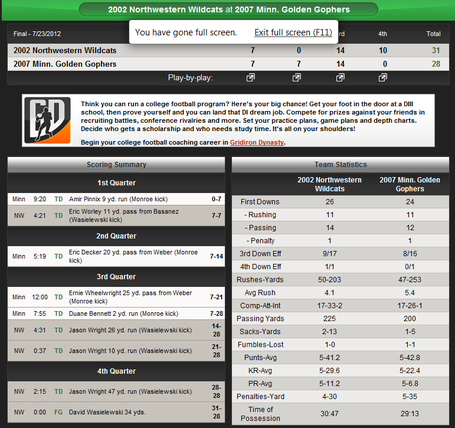 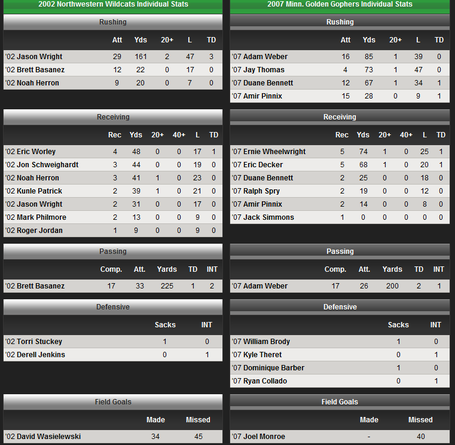 Fantastic. Really, just fantastic. In a game in which Northwestern allowed Minnesota to rush for 253 yards on 47 attempts, for a 5.4 ypc average, Mike Dunbar and Tim Brewster somehow decided that with a 14-point lead in the 3rd quarter, it was a good idea to keep dialing up passes; consequently, Adam Weber was picked off, beginning the Northwestern comeback that saw Randy Walker's boys, led by Jason Wright's 161 rushing yards and the 225-yard passing day for Brett Basanez storm back to allow the '02 'Cats own Thaddeusz Kosciuszko to hook a 34-yard FG in as time expired. Basanez' two picks helped the Wildcats dig a 21-point hole early in the second half, but the Weber INT and a lukewarm second-half commitment to what had been a wildly successful rush attack derailed the Gophers' cause. Then again, the defense didn't help either.

Goat of the Game: Defense. What, you thought I was going to choose Tim Brewster? The offenses in this game combined to go 17/33 on third downs, each team racked up at least 200 yards rushing and passing in the another of those water-pistol shootouts that characterized this series in the aughts. 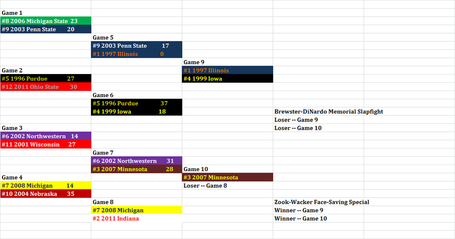 If it wasn't already obvious, these two programs have combined for blown leads, awful defense, and general incompetence that will probably play some role in my impending diagnosis of cirrhosis of the liver. As it stands, the '07 Fighting Brewsters were the turd-ier of these two terrible teams, advancing to the semifinals, while the '02 Wildcats will avoid the memory of their late Coach Walker being sullied by further defeat in this tournament.

Next week, though, we will visit another coach who derailed a program, Rich Rodriguez, as he takes on a coach who has inherited a perennial loser, Kevin Wilson of Indiana. Will the Hoosiers surprise the world and add insult to...already a ton of insult from the Rodriguez era? Or will Indiana really just...be Indiana? Stay tuned, folks, and thanks as always for all the tweets, comments, and feedback.