Share All sharing options for: Big Ten at Ten 7.25.12: Willie and Pete Fire Back

A few weeks ago Big Ten mascots made it abundantly clear that they had no problem embarrassing themselves for a few hits on YouTube. Of the 12 schools in the conference, only 7 were represented in the video as Illinois, Indiana and Michigan do not have costumed mascots. Illinois used to have a mascot but it was uh...racisty. This raised the question: Why weren't Willie the Wildcat of Northwestern and Purdue Pete of Purdue included? Furthermore, why were they not even contacted?

I've done some research and formulated the following reasons as to why they may have been left out: 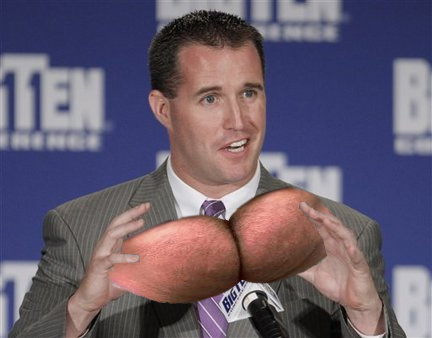 Regardless of the reason for their absence, Willie and Pete fired back by making a video of their own. Hit the jump.

It starts off normal enough by referencing Willie and Pete's exclusion from the Call Me Maybe video. Then...things get weird. There's a good minute of Pete and Willie doing nothing more than benching the bar, squat thrusts, pull ups, walking stairs, doing the Pee Wee Herman and running around empty stadiums (NORTHWESTERN ATTENDANCE JOKE HERE). I guess I don't understand what they're doing. Are they working off their frustration through monotonous exercises? Why does Pete have an iPhone and Willie have nothing more than a payphone? Doesn't Giorgio Armani make a phone? In the end there are more questions than answers. To the links.

Finally, a continuously updated post on Penn State players who will be staying or going via BSD. The post (as of 9:40) did not mention this:

Bill O'Brien just said on ESPN that Iowa HC Kirk Ferentz has called him about recruiting his players. #NittanyLions #Hawkeyes

I'm not sure what the rules are in this situation. Is a coach required to contact BOB or is it just professional courtesy? Apparently, BOB went on to say that "other" coaches weren't as courteous. I'm looking at you, Randy Edsall.