Share All sharing options for: Not B1G 2012 Notre Dame//The Loudest Guys In The Room

Hi, Notre Dame fans! First off, if you're new here, welcome to Off Tackle Empire. We hope you'll come back from time to time. Even though you're not a member of any conference (yet, muahahahaha), your team has deep ties to the B1G, both in terms of rivalries and geography, so we thought this would be a nice way to 'get to know our neighbors', if you will. You probably saw Eric Murtaugh's Cocktail Party Preview yesterday, thought to your self 'wow, that was some quality writing', and decided to come back over here to see what today brings. A fair warning:

1. Eric is a great writer for Notre Dame over at One Foot Down, as most of you probably know. And he was able to put aside his (probable, but I'm just guessing) disdain for the B1G to write a great Cocktail Party Preview piece for us.

2. I'm not Eric. I've spent most of my life disliking Notre Dame, and my lovely wife informs me I have the maturity level of a 7 year old when it comes to sports. When I protest, she reminds me of the sympathy card I sent to my cousin when Notre Dame lost to Northwestern back in 1995 (True story, really happened). However...

3. The below write up on your coaches (we just do the head coach and two coordinators) is done fairly and as objectively as possible, but sometimes, I can't help myself. Partly because I'm a jackass, and partly because you're Notre Dame. So it's just as much your fault as it is mine.

So, with that out of the way, enjoy!--Ted

The Fighting Irish of Notre Dame. The words are some of the worst stereotypical nicknames regarding a section of the population in the history of the sport just roll off the tongue--so much history, both on the field and on the sidelines.

Most of the current roster of a 3-13 Minnesota Vikings team.

And to that legacy comes Brian Kelly, odious, purple faced death merchant ( © MSUlaxer27), lifetime Irish Catholic guy who grew up a huge ND fan, and a guy who's got a great recruiting pitch. In all seriousness, Kelly was a guy that was a natural for the Notre Dame job, with solid credentials and a reputation to match. I thought he was the perfect fit for them when he was hired--great resume, had taken a doormat Cincinnati program to a BCS bowl before he left in the dark of the night on the eve of the biggest game in school history, and seemed to be a guy that 'gets it' about being at Notre Dame, both in terms of history and expectations.

But those expectations at Notre Dame are always demanding, and he's entering a critical year for the Fighting Irish. 8-5 and a Sun Bowl win was a good first year considering what he inherited from He Who Is Now In Exile In Kansas, but an 8-5 second year with a middling bowl loss wasn't progress. It's too early to call it a step back based on the offense Kelly is installing and the fact he still needs to recruit guys he wants for said system, but Kelly wasn't hired to go 8-5 and end up in a mid-December bowl game.

Or lose to Michigan at the last second with something like eleventy two Denard Robinson rainbows in a row. Just what the hell was that, anyway? 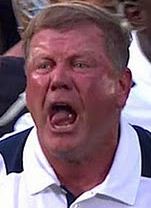 As a coach, he's a good one. I said from the moment Notre Dame hired him I thought they got the right guy in terms of where the program was and where Notre Dame expects to be. The Irish have missed, and missed big, on every coaching hire since Lou Holtz left, and in Kelly they went out and got a guy with a proven record of winning at the collegiate level. His specialty is the Spread offense, and his past teams have piled up yards, points, and wins in bunches. He won big at Grand Valley State, his first head coaching job, to include back to back Div II national titles. He turned around a Central Michigan program from a 3 win ceiling to MAC Champions in 2006. But just a couple days after that, he accepted the Cincinnati job and left CMU before their bowl game.

Fool me once, shame on me.

At Cincinnati, he won 10, 11, and 12 games in his three seasons there, and in 2009 got them to #3 in the BCS standings and a berth in the Orange Bowl. He parlayed that into the Notre Dame job, but denied he was taking said job right up until the moment he held a press conference and announced he was...taking the Notre Dame job, leaving the best Bearcat team in history at the altar, just days before they were to meet Florida in the Orange Bowl.

Fool me twice, shame on you.

And that's the rub about Kelly--proven winner who has some of the dickish qualities that we have all come to hate in the modern football coach--a guy that preaches team and family until the bigger, better, deal comes along. Now, that said, I would be stunned--STUNNED--if Kelly pulled the same thing on Notre Dame. He's Irish Catholic, has been a lifelong fan and supporter of the Irish, and he considers South Bend to be the pinnacle. I don't know why, but he does. So, he's not going anywhere on his own accord, but if he doesn't start winning big, and like right now, this might not be the dream job he thought it was.

"You can see the players that I have recruited, you know who they are."

Kelly has been...how can we put this...a hot headed ass, at times, since he became the Notre Dame coach, and arguably his low point was this gem of a quote after last year's loss to USC. This was taken as a back handed slap to the guys on the team before he got the job, and Kelly had to apologize to the team before their next game to avoid a full blown mutiny. But that's Kelly--no BS, tell you what's on his mind coach that won't accept mediocrity. And that's good--that's what made him a winner, and those are the qualities that are needed to get Notre Dame back to being a player on the national stage again.

But he can also be a charming, funny guy that is engaging and passionate about Notre Dame. I watched his introductory press conference again (sorry, embedding was disabled, but click the link--well worth it) and by God, it gave me goosebumps, and I've never liked Notre Dame. He talked about growing up as an Irish Catholic kid in Boston, coming home from church and watching and listening to the replays and highlights of Notre Dame football, and remembering announcing great Lindsey Nelson describe the games. It was perfect. That's the Brian Kelly Notre Dame hired. And to his credit, whatever it was he said to the team after his above comment worked, as Notre Dame was able to come together and move past it. The one guy that seemed the angriest about it, Manti Te'o, came back for his senior season.

The problem is, when things go bad on the field, he has a hard time dealing with it in an acceptable manner. He has gotten better, but Notre Dame isn't Cincinnati, and he is in the spotlight 26 hours a day, 9 days a week. Whether it's a sideline meltdown or publicly insulting the team after a loss to a main rival, he has to control his emotions and be the engaging, passionate about Notre Dame Kelly all the time, even when bad things happen.

Coach Kelly is on the Twitters, and he's the first coach I've seen that doesn't use excessive exclamation points! But no matter what, he's always going to work you, no matter who you are:

Good luck to all the fantasy campers tomorrow..Get a good nights rest you will need it.#goIrish

18 or 80, Coach Kelly will smoke you on his practice field. Grab your walker and wake up the echoes, Gramps

It's actually a fairly nondescript Twitter account. Very blah, very mundane, very pro-Notre Dame. In other words, nothing like his real life persona since he's been the coach there.

Unfortunately, Martin is a guy that will be not given credit for any offensive success Notre Dame will achieve, because Kelly is the guy with the system, and he largely runs it, or is perceived to run it. But that's not to take away from Martin at all, as he is a very good coach in his own right. Martin took over for Kelly at Grand Valley State, and ran largely the same offense with almost as much success. He came to Notre Dame in 2010 when Kelly got the lead gig, and was curiously put on the defensive side of the ball, coaching the secondary. He helped develop S Harrison Smith, who eventually became a first round draft pick for the Minnesota Vikings (woot woot!).

Kind of an unfair question, as he's already been a head coach, albeit at the Division II level. If he has success here, three years before he goes to an FCS program as the main man.

Yes, Iowa fan, THAT Bob Diaco and THAT Kerry Cooks. Both all Big Ten defensive players at Iowa, Diaco and Cooks will help lead a resurgent Irish defense. Diaco is named defensive coordinator and Cooks as co-defensive coordinator, so I'm giving Diaco top billing here. Diaco pulled an almost Greg Mattison-like turn around with the Irish defense in 2010, but they slipped a little bit in 2011. He still has a ways to go to get to the level of consistency required to get the Irish to a top flight program, but he's definitely got them heading in the right direction.

Diaco, no. Kerry Cooks has a Twitter account, but it's protected. From what, I don't know, as he has only tweeted thrice, has 22 followers, and follows 2 people. Why bother, Kerry, why bother...

Unresearched O/U Years it will take to become a head coach:

Look, it's Notre Dame. If Diaco has success here, three years tops and he'll get a job. If he doesn't like it, he can stay at Notre Dame until he gets a job he wants.