Happy belated Fourth of July to you all--my apologies for the lateness of this post, but what with the 4th and getting back to work, things fall by the wayside. Our third show went down last Sunday, if you've forgotten. Remember, lest I be a dick and snap at you, Herr/Frau(lein) First-Time Commenter, every game will be a one-game simulation on What-If Sports, which only goes back to 1996 for available teams. All the rules can be found here. Not requiring that, read on, fair sir/madam. Who will be our last lovable loser to join 2002 Northwestern, 2003 Penn State, and 1996 Purdue in the second round? Our competitors:

Welcome to Ann Arbor, Rich Rodriguez. With a new, shiny, fancy spread offense, the Wolverines dropped their fifth consecutive to the State University of ohio, and even a 27-25 upset of then-#9 Wisconsin couldn't rescue the Wolverines from the disaster that was. The QB tandem of Steven Threet and Nick Sheridan combined for the quintessential spread offense line: 48.8% completion rate and 11 TDs against 12 INTs, while the offense somehow managed to fumble the ball 38 times over the course of the season, losing 18 of them. Thorough outgained and outclassed, Michigan football in 2008 began its exile, desperately searching for the MANBALL to rescue it from the RichRod spread.

For your listening and viewing pleasure!

We'll double it, just because!

I'll admit that I had very little clue how to seed or rank this Nebraska team, and I appreciate the input of SCS and Kennard on what to do here. First, the ugly: this team lost 70-10 to Texas Tech. I'll let that sink in. Wisconsin can't even beat Indiana by that much (mostly because they run out of time). Yet these are the Nebraska fucking Cornhuskers losing by 60 to Texas Tech. What's most disgusting? Colorado won the Big 12 North this season with a 4-4 record. Yep. Despite the level of suckitude that was Bill Callahan and 2004 Nebraska, this team almost won the Big XII North. Only outscored 27.1-25.0 per game, Nebraska's offense couldn't hold onto the ball: Joe Dailey threw 19 INTs for a team that finished the year -6 in TO margin.

How many touchdowns can YOU count, Billy?

I honestly can't pick a winner here. Seems to me like Michigan should far and away lose, but shit, if Nebraska gave up 70 points once, why can't they do it again? There aren't many special teams questions here, as 4 of Nebraska's 6 missed FGs (they tried just 12) came from 40+ and Michigan's K.C. Lopata was electric for most of the season. Nothing to do but hit the jump... 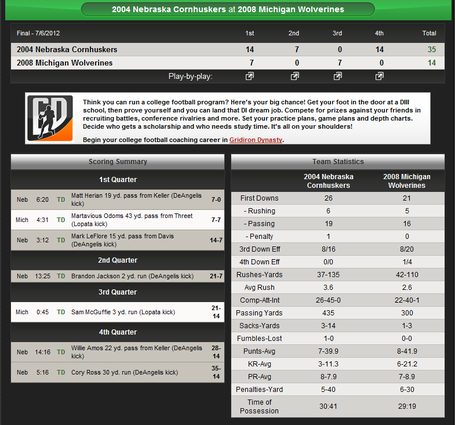 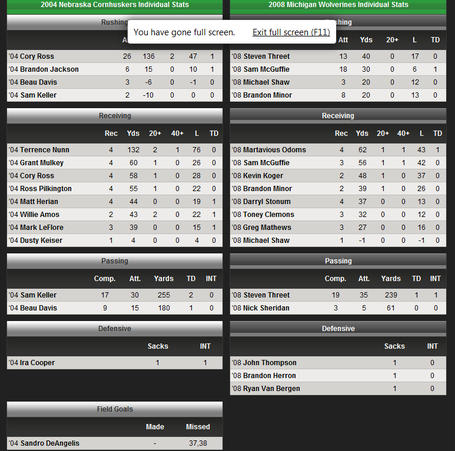 Well that was easy enough. Nebraska even suffered two more missed FGs by Sandro DeAngelis, yet still managed to beat Michigan by three scores in a game that got interesting after Michigan got within 7 in the 3rd quarter. The Blackshirts' defense allowed 300 yards passing but forced one interception and only gave up 110 yards on the ground; while Michigan came up with three sacks of the Cornhusker QB tandem, they allowed 570 yards of total offense and allowed Nebraska to rack up drive after drive, having a field day with the Wolverines.

RichRod's boys pack their things, leaving Delany field for presumably a Josh Groban concert, ready to return next week against #2 seed Indiana of 2011.

Goat of the Game: 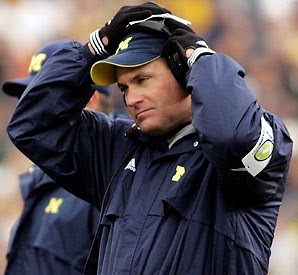 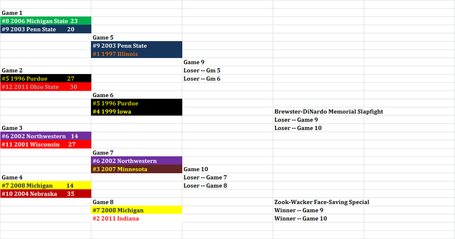 Save for 2003 Penn State's seizure of defeat from the jaws of victory against 2006 MSU, it's been all chalk to the quarterfinals of this battle of Big Ten bottom-dwellers... We'll pick up again sometime soon with our #1/#9 matchup as the most recent 0-fer season of Big Ten teams, 1997 Illinois, attempts to keep the streak alive against the 2003 Nittany Lions.

So, OTE reader: what do you think? Picks to go all the way? Prognostications on the battle of MHRs in Game 6? Can Minnesota inexplicably allow a Northwestern receiver to catch a Hail Mary in the end zone? (I'd ask if Wisconsin could, too, but they already won out.) As always, all the comments and thoughts are appreciated; hope you all are enjoying both your summers and this little break from reality!