If there was ever a team in need of an identity, it is the Fighting Illini. Program history is littered with rapturous highs and wretched lows. Try this on for size: Since 1940, Illinois has seemed to follow a maddening pattern; they have seven B1G titles in that span but also have had 8 seasons where the team won a single game or less. This is a success rate equal to MSU (seven titles), Iowa (eight titles), and UW (eight titles) but a failure rate equal to IU (eight single win seasons).

Since anything before the invention of the internet is ancient history, the decade of 2001-2010 displays this annoying trend succinctly for our readers. During the same period the Illini lost 15 straight B1G games and 12 straight B1G road games while sporting a disastrous 2-30 conference record (on the bright side they were 6-8 out of conference), the Illinois eleven also went to two BCS bowls and won a B1G title.

Illinois fan(s), after conducting this research I can understand why you might be less than enthusiastic about your team on a yearly basis.

Ladies and Gentlemen of the jury, I propose that last season provided a perfect representation of Illinois football history. Rapturous highs: Six straight wins to start the season while reaching #15 in the Coaches Poll including a win over Northwestern for the Sweet Sioux Tomahawk, world's largest Monopoly piece, Land of Lincoln Trophy. Wretched lows: Six straight losses to end the season including the snooze fest in State College where both squads attempted to murder offensive football and the final game of Ron Zook's tenure where the Illini looked non-competitive against 3-9 Minnesota.

Say what you will about the lamented (at least by the rest of the B1G) Mr. Zook, but last season was, if nothing else, entertaining even if unfulfilling. Up until the twelfth game, every contest against Division IA opponents was at least competitive no matter the outcome. Even still, Illinois posted back-to-back winning seasons in 2010 and 2011. The team closed out the roller coaster of 2011 by beating UCLA thereby winning bowl games in back to back seasons for the first time in school history. 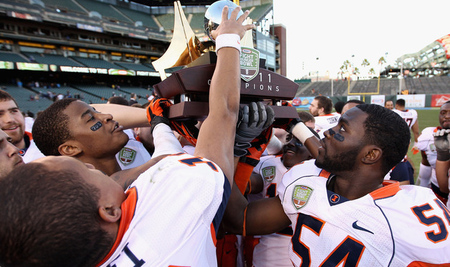 What? You were expecting a picture of a water skier?

You may ask if there is any reason to be excited for this new era of Fighting Illini Football. Yes!

The team from Cham-bana returns fifteen starters (8 defense, 7 offense). In the 2012 NFL draft, four players from the University of Illinois were selected in the first two rounds, the most in the B1G. The vaunted MSU defense from 2011, which returns eight starters in 2012 as well, allowed 257 points last season. The Illini allowed 255 in 2011. There was never any question about the talent Illinois possessed. It was always a question of coaching acumen and the hope is that importing Tim Beckman and his hot MAC-action will correct that side of the equation.

Are Illini fans the emo kids of the B1G? Is the aloofness they demonstrate toward their football team just a mask to hide the crippling emotional pain inflicted upon them by decades of uncertainty? Is consistent football success their "girl that got away and broke their heart?" Do they "not care" because they "care too much?"

Is it not so much a matter that they can't have nice things as much as they don't want nice things? Having loved and lost (B1G titles and dreadful seasons) is it simply not worth the emotional effort anymore?

Due to the hobbling of two of the more successful programs in the Probation Leaders Division, there has been talk of "Dark Horse" candidates for a berth in the B1G game in Indianapolis. Purdue has been mentioned most often as the benefactor of the disorder existent in that half of the conference.

I submit that due to the residual talent calling Champaign home your Fighting Illini are a much better choice for this "honor." They return fifteen starters (just like Purdue) including eight from a markedly better defense (255 points allowed vs. 349). Illinois gets the benefit of skipping MSU and Nebraska. Their crossovers are UM, NU and Minny, but unfortunately, all their toughest competition is on the road (@UM, @OSU, @UW, @ NU). If it does come down to Illinois vs. Purdue for a spot in Lukas Oil Stadium, that game will be played in Illinois.

A. I have the Illini finishing up at 3-9 (1-7). This was not planned. We all filled out our picks before Illinois and Indiana were picked up by our staff. I offered to write this piece and only after taking the assignment did I realize that I picked the worst season outcome for the Fighting Illini among the staff. I will hedge my bet and say that after learning more about the team I will probably be off by a few games. It would not surprise me if Illinois winds up experiencing a Hoke like bounce under Coach Beckman. It is Illinois though and history shows that a 1-11 tire fire is not out of the realm of possibility either. But not 0-12, now that would be a CRAZY prediction.