A good morning/afternoon/evening to all of you, wherever you may be. First, my sincerest apologies for letting this die for a good month. I've taken up a full-time job in the Twin Cities area, and between that wearing me out and different events on the--ahem--social calendar, I just didn't have it in me. As a result, I have a new appreciation for all you bloggers. When we left off last, the 2007 Fighting Brewsters managing to piss another away against 2002 Northwestern. All accounts report that I personally took the game well and without incident and that any alcohol binges in the aftermath were in no way related to the result of the game.

So we move on! Since you probably need it, here's what you missed last time and the rules of the game. Today in our battle for the bottom of the Big Ten basement, we find ourselves in the classic 2-7 matchup. Who will prove themselves worthy of a spot in the semifinals of suck? Let's meet the contestants:

The Michigan defense allowed the Huskers to rack up 570 yards of total offense, embarrassing themselves as a scuffling running attack and a spread-the-ball-at-all-costs passing attack made few inroads against the Blackshirts' defense.

Hey, remember this team? Didn't they suck? Watch Virginia score 11 points in 96 seconds to beat them!

Oh yeah, and no one say anything bad about Kevin Wilson or Indiana football in this segment of the ATWB1GTEC lest he tear into you on the radio. INDIANA FOOTBALL!

If this game doesn't produce a Michigan win by at least 75 points, I will deem RichRod a loser. If Indiana participates in this game, I will probably deem them losers. Nonetheless, we jump on... 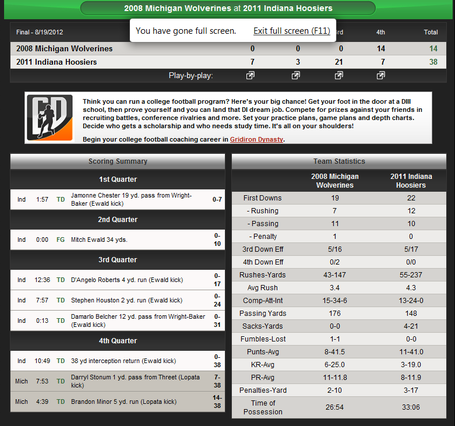 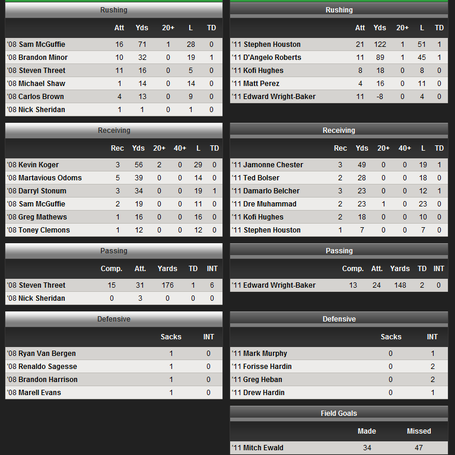 WHAT THE HELL I DON'T EVEN GODDAMMIT RICH ROD YOU BASTARD. Apparently Indiana gets nice things today and Jack Trudeau can go to hell. Steven Threet was picked off on FOUR of Michigan's first FIVE drives and would have his fifth interception returned for a touchdown in the 4th quarter as Indiana took a 10-0 lead into halftime and scored touchdowns on all three drives in the 3rd quarter, producing a 38-0 lead not even the '06 Gophers or Wildcats could blow. Indiana's suspect offensive line allowed Edward Wright-Baker to be sacked 4 times, but Michigan did not force a single turnover, and the sometimes high-octane Indiana offense shined. Granted, it's much easier to shine when their average starting position, by my crude math, was their own 42 yardline. Big hats off to Threet on that one. 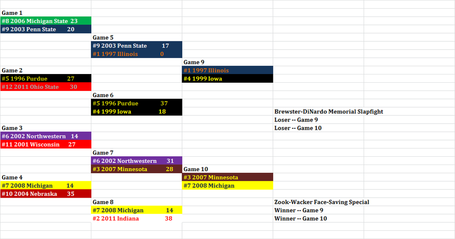 So, our first real upset! I must confess that I doubted Indiana's ability to take the laxative-laced cake, as their propensity for scoring and just not being able to stop teams was likely to produce a win eventually. As a result, the '08 Wolverines trip into our semifinals to battle it out with '07 Minnesota for a Little Brown Jug presumably filled with RichRod's tears and Bret Bielema's piss all over Tim Brewster's dreams.

Stay tuned for the adventure that will be our Final Four, as in our next matchup, the vaunted winless '97 Fightin' Illini take on the '99 Hawkeyes in a matchup many found fitting of a championship showdown. For this time, though, we leave you with an obligatory and poignant farewell: MICHIGAN SUCKS!