Much like Ender Wiggins (and if you haven't read Ender's Game, you really should), Northwestern is different from the rest of the B1G. A private school. Small (8,400 undergraduates, compared to Ohio State's 43,000). Academically elite (which is saying something, since the rest of the schools in the B1G are themselves elite academic institutions -- Northwestern is an elite among elites). Located in/near/next-to a large city (rather than being an autonomous college town). Refusing to drop its academic requirements for student-athletes. And, prior to 1995, no tradition of athletic success.
Faced with these obstacles, Northwestern had to "remain creative." Isolated from the other schools in the B1G and unable to compete on a balanced playing field because of those differences (admittedly, some of them self-imposed, such as Northwestern's academic requirements), it adapted. Got angry. Used its differences to its advantages.
Bam! Four straight bowl seasons (a school record), and recruiting that is improving according to all the experts in the "caring is creepy" world of recruiting. Magic? (Or should I say, Fitzwizardry?):

Ladies and gentlemen of the jury, conventional wisdom says Northwestern should be a doormat. It's win totals have gone steadily down -- from 9 in 2008, to 8 in 2009, to 7 in 2010, to 6 in 2011. It lost its starting QB (Dan Persa), its top 2 receivers (Drake Dunsmore and Jeremy Ebert), two offensive linemen (Al Netter and Ben Burkett) and 3/4 of what was already a disappointing secondary in 2011 (Brian Peters, Jordan Mabin, Jeravin Matthews). Their leading returning receiver, rusher, and passer is the same man -- Kain Colter (who will be QB this year, and thus probably not leading the team again in 2 of those 3 categories). They made no coaching changes this off-season (despite cries for wholesale changes to the defensive staff from disappointed fans). Their Board of Trustees continues to drag their feet on a comprehensive athletics facilities overhaul, so they continue to play in the worst stadium in the B1G and practice at facilities that might best be described as "middling....by MAC standards." They play against a stacked Legends division (at Michigan State, at Michigan, and hosting Iowa, Nebraska, and improving Minnesota), and foolishly scheduled THREE BCS conference opponents (at Syracuse, hosting Vanderbilt and Boston College) for their non-conference schedule.

Pat Fitzgerald, athletic director Jim Phillips, and the coaching staff are building a team that is becoming more athletic, more competitive, and tougher to beat every year. Yes, the win total has been declining recently...but that ends this year. Let's show you how.... 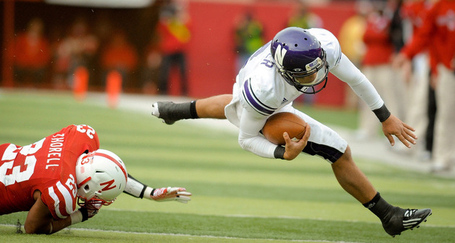 A. What We've Written About Northwestern This Offseason

First, for the offense:


Jazzy funky pounce bounce dance
As we dip in the melodic sea
The rhythm keeps flowin, it drips to MC
Sweet sugar pop, sugar pop rocks it pops ya
Dont stop till the sweet beat drops
I show and prove as a stick in move
Hear the poems recited on top of the groove
Smooth, mind, floating like a butterfly
Notes start to float, suttle like a lullabye
Brace yourself as the beat hits ya
Dip trip, flip fantasia

Want a statistic to impress your friends at the next tailgate? Northwestern's scoring offense has improved each of the past 4 seasons: 24.4 ppg in 2008, 25.8 ppg in 2009, 26.4 ppg in 2010, and 28.9 ppg in 2011. And with Kain Colter in the backfield (a triple threat who completed 67% of his passes last year for 673 yards, 6 TDs and 1 INT, ran for 654 yards and 9 TDs, and had 466 yards receiving and 3 TDs) along with speedy Venric Mark at RB (he's small, but VERY shifty) and what ESPN says is the best WR corps in the conference, expect to see more offensive fireworks (including a lot of option attack utilizing Colter and Mark's excellent speed). Opposing defenses will need to brace themselves as the beats hit them....Northwestern's offense is one dip trippy flip fantasia.

Jump to the jam, boogy woogy jam slam
Bust the dialect I'm the man in command
Come flow with the sounds of the mighty mic masta
When I rhyme on the mic I bring a sucka disasta
Beaucoup bucks and I still rock Nike
With the razzle dazzle star I might be
Scribble scrabble on the microphone I babble
As I flip the funky words, into a puzzle

Northwestern's defense has been nonsense lately. No pressure at the line of scrimmage, and communication breakdowns ("bust the dialect" certainly, and they're definitely babbling to each other) in the secondary. Word out of camp is the defense has simplified things, has better (if younger talent) and more depth....but the question remains whether the Wildcats defense will "bring a sucka [Northwestern fan like myself] disasta" or be "the man in command." Truly a funky puzzle.

I wrote a lot about why Northwestern is getting better in this column, and some of it bears repeating -- they've stopped having numerous blowout losses (15+ points or greater), their offense has steadily improved, recruiting is getting better, and the fan base/administration is starting to line up to better support the team. Incremental progress, but progress nonetheless. As Paul Myerberg points out at Pre-Snap Read:

Unlike a certain quarterback's Achilles tendon, Northwestern is firmly attached to its current location: six or seven wins in the regular season, followed by a loss during bowl play. This is Northwestern football as run by Pat Fitzgerald, the legendary middle linebacker who has lifted N.U. into a position where a postseason run isn't merely a nice surprise but a designated expectation. Unfortunately, those who have seemingly forgotten the Wildcats' dire past - you wouldn't think it was possible - are no longer satisfied with six or seven wins; to this slice of the fan base, six or seven wins should have already been used as a springboard to Rose Bowl contention. I can think of three things wrong with that point of view: Michigan, Michigan State and Nebraska - and that's just in the Legends division. It pays to be pragmatic, especially when your pragmatism involves Northwestern football.

But this is an emotional plea, so here goes: college football's offseason this year sucked. It sucked worse than we can possibly imagine, and it gave numerous programs black eyes for all types of scandals.

No one can claim omniscience when it comes to whether a program is "doing things the right way." Certainly, we have no room to say that in our own conference.

But if we have to put our faith that a team is "playing the right way," that the concept of "student-athletes" means something real (and in that order) somewhere, and that underdogs can compete, and dare I say win at the top levels against opponents that outmatch them in many ways....

In a cynical world, maybe all of us should be rooting (even just a little bit) for the guys in purple.

The OTE staff predicts Northwestern will finish with 7.1 wins and 4.9 losses, with a 4-4 (or 3.8 - 4.2) conference record. The OTE staff was not polled on what Northwestern would do in a bowl, however....but since the rest of our writers are degenerates who like to laugh at the suffering of others, I'd predict they'd all expect Northwestern to blow its bowl game in some spectacularly painful yet entertaining fashion. (Also, for entertainment's sake, please note that NO ONE has Iowa beating Northwestern in Evanston this year, suggesting that Fitz's hunger for Iowa ass and associated wizarding power continues unabated)

C.E. Bell: 8-4 (5-3 in conference) with losses to Vanderbilt, Nebraska, Michigan, and Michigan State.