Yesterday evening, Mike Jones introduced a very important discussion to the OTE population: Are shirts and ties okay to wear at a football game? This obviously spurred on quite a bit of discussion, generally ending in some sort of mangled discussion about whether it's healthy for Ted's to be passionate enough about the Vikings to wear this monstrosity: 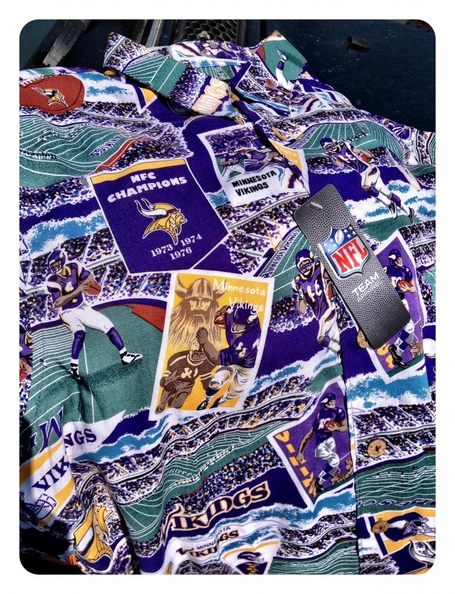 [Note: This shirt would be off limits in the state of Oklahoma because it might be gang related due to its huge lack of the great state of Oklahoma College Football team logos all over it. Don't believe me? Well, Graham's mom sent him a link who sent me the link who posted it here for proof. So there. Then later, Dave Brandon (Michigan AD) invited the kid to a game because why wouldn't you? Okay, back to our regularly scheduled rant...]

While this really has nothing to do with the links or talking about football specifically, I just want to point out that we are officially down to a week before the 2012 FBS NCAA CFB Season begins. ONE FREAKING WEEK!!! After watching basketball, hockey, the Olympics, soccer, bowling, tennis, golf, or whatever, we are finally on the cusp of watching our real favorite pastime. I, for one, could not be more excited about the prospect. Yesterday, I started planning for next week's first official Football Watching Extravaganza of the season by taking inventory of various foodstuffs I will be serving.

Of course, this got me thinking. I know Chad has done a great job in the past of getting a potluck out before the season and last year we even got some food ideas out there from the writers, but my guess is that our commenting group knows where it is at food-wise. This year, my secret go-to will be a new homemade chili I've been trying to perfect. The key is smoky paprika, Chipotles in Adobo Sauce, black beans, and homemade chili seasonings including a little Cajun flare for good measure. My wife adds in some homemade jalapeno cornbread and you grab a frosty beverage of choice and we are good to go.

So whether you are tailgating, partying, or watching the game by yourself because your friends are embarrassed by your jersey/hawaiian shirt/shirt & tie/bucknuts costume, etc. let me know in the comments what you are eating this year. I'm in need of some new recipes and as we all know, food is one of the most important parts of the experience.

Indiana: "How do you boost a defense? In this case, you just move on to talking about the offense."

Minnesota: "And one more thing: Jerry Kill doesn't care about your stupid positional rankings and polls. He thinks you can blow them out of your ass. (I'm looking at YOU world wide leader in sports B1G blog.)"

Illinois: "If there was ever a team in need of an identity, it is the Fighting Illini. Program history is littered with rapturous highs and wretched lows."

Ohio State: "Meyer has somehow managed to turn a one year post season ban and scholarship reductions into a source of motivation, and if Ohio State plays as pissed off as Urban Meyer coaches, God help the B1G."

Northwestern: "In a cynical world, maybe all of us should be rooting (even just a little bit) for the guys in purple."

Purdue: "When the robots come to get us (and they will), will it really seem that weird that Purdue just won the Big Ten Championship?"

Iowa: "Unfortunately, the belief that "no hype = good Iowa team" translated into "actual hype" and we expected more despite questions at running back, tight end and on the defensive line. Well...that was a mistake."

The same day that the Hawkeyes last met the Huskies, Michigan lost at home to Appalachian State, 34-32. "Yeah, we heard that after the game," Iowa defensive lineman Matt Kroul said. "I can't believe that. Can you believe it?"

Conference Links:
Big finish? Meh... I meant to get links out on Tuesday, but I was trying to stay awake and play catch up at work. Mostly because on Monday, I got to see this and sit in a parking lot for an hour afterwards before getting home way later than I should have. Oh well. Have a good evening! (Note, this is not my video and this is not me singing, but I was there and Mumford and Sons were pretty amazing live.)

With A Little Help From My Friends - Mumford & Sons (via NinjaReese19)