We're all familiar with the back story. After years of offensive malaise and uninspiring, underachieving play under Lloyd Carr, and after one of the most poorly executed coaching searches imaginable, Michigan finally got its man in Rich Rodriguez, the architect of the spread offensive and someone who would surely breathe new life into the staid Michigan program. However, in one of the best examples of "be careful what you wish for," the Rich Rod era turned out to be one of the most forgettable three-year stretches in Michigan history. You can argue that Rodriguez never had the support required to fully realize his vision of Michigan football (and you'd be right), but you can't argue with the results, an embarrassing three-year run highlighted (if you can call it that) by a defense that got progressively worse, finishing 2010 as one of the worst in the nation. Enter relative unknown Brady Hoke (and almost importantly, defensive coordinator Greg Mattison), who, with essentially the same cast, led the Wolverines to an 11 win season and a victory in Sugar Bowl in his first year. Michigan's unexpected success in 2011 set the stage for, depending on how you look at it, an even better 2012 or impossibly high expectations for 2012.

The future hasn't been this bright for Michigan in years. Stressing toughness, accountability and strength at the point of attack (Hoke is an old defensive line coach, after all), Hoke has Michigan playing physical, power football again (albeit with a more aggressive offensive philosophy). And based on the way he's recruiting, he doesn't look to be deviating from this path. Much has been made of Hoke's recruiting success over his first year-plus at Michigan, but his true success lies not in the number of four and five star recruits he's netted (critics of Michigan are quick to point out that Rodriguez had highly ranked classes), but rather in who he's recruiting and how he's building his team. In his first two recruiting classes, Hoke has focused on the offensive line and the defensive front seven. Landing rifle-armed, quarterback-of-the-future Shane Morris has certainly added to his bounty, but Hoke has shown that the heart of his teams will be strength up the middle. Look no further than defending national champion Alabama to see what a dominating offensive and defensive line will do for a team. Hoke is building the same kind of team at Michigan, and in doing so is positioning them well for the future.

A. What We've Written About Michigan This Offseason

Despite the bright future, Wolverine fans would be best served to show patience this year. Even though most preseason polls seem to be penciling Michigan into the Big Ten title game, their place there is not a given. To begin with, Michigan has some serious holes to fill. The strength of last year's defense, the defensive line, will almost entirely have to be replaced. Gone are Mike Martin, Ryan Van Bergen and Will Heininger. Craig Roh returns for his senior season, but the rest of the defensive line is a question mark. Other key departures include David Molk and Junior Hemingway on offense (how much will Denard Robinson miss Hemingway?). How desperate is the situation at receiver for the Wolverines? Much of the talk over the summer has centered on backup quarterback Devin Gardner's possible transition to receiver. "But what about all this great recruiting?" you may ask. Yes, Hoke is positioning Michigan well for the future, but doing so the way he is takes time. Many of the positions on which Hoke is focusing, particularly the offensive and defensive line, are those at which young players rarely make an immediate impact. OL Kyle Kalis and DT Ondre Pipkins are the jewels of Michigan's 2012 recruiting class, but while both will most likely see playing time as true freshmen, it's unlikely that either will play a significant role this season. 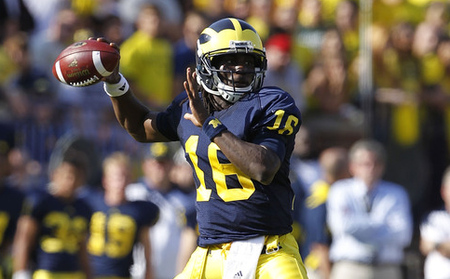 But that's not to say that all hope is lost for 2012. Replacing key performers is a challenge that every team faces, and the cupboard is not exactly bare at Michigan. Brennen Beyer, Jabreel Black, Quinton Washington and former five-star recruit William Campbell are all capable of contributing on the defensive line. And if there is a slip there, it could be countered by a linebacking corps that looks to be stronger in 2012, as Kenny Demens, Desmond Morgan and Jake Ryan all return, where they'll be backed by a trio of talented freshmen vying for playing time. Taylor Lewan returns to anchor the offensive line, and while he's yet to prove he can be the big play receiver that Hemingway was, Roy Roundtree returns for his senior season to bring some stability to the passing game. And of course, Denard Robinson returns to lead the Wolverines.

If Michigan is to compete for the Big Ten championship this season, however, its fate could hinge on offensive coordinator Al Borges. Unlike Greg Mattison, who seemed to get the best out of the players he inherited, Borges struggled trying to best utilize Robinson. Granted, Borges is most comfortable running a pro-style offense, but he has adapted to dual-threat quarterbacks in the past (most notably Jason Campbell and Cade McNown). Borges never really got in sync with Robinson, however, and the offense struggled at times, particularly against Michigan State and Virginia Tech. That Michigan was able to stay in those games is a testament to their will (and their defense), but they'll need a much more consistent offensive attack this year. Robinson is a better passer than he's given credit for being, and another year together should help both Borges and Robinson. At least that's the hope in Ann Arbor, because for all Mattison achieved with the defense last year, the offense will have to make similar strides if Michigan is to improve upon last season's success.

A. The OTE Staff Calls the Games

Is it possible that I am too pessimistic about Michigan this season? I prefer the term "cautious," to "pessimistic," because while Michigan may be a better team in 2012, that improvement may not be reflected in their record. And a schedule that has them playing away from home against the likes of Alabama, Notre Dame, Nebraska and Ohio State won't help. So while Michigan will be good, maybe even very good, they won't be dominant (yet), so unless the offense makes the kind of progression that the defense made last year, they'll need to catch a few breaks this season. I'm just not sure they'll catch them all.