A happy happy football week to all of you! This whole "regular installments" thing is overrated, so look at me do both semifinal games in one day! The second game, '08 Michigan vs. '07 Minnesota, is forthcoming (edit: it didn't get all the way finished, so look for it around 6-7pm CST tonight); in the meantime, though, our first semifinal features two of the Big Ten's finest from the 20th century (OK, the last 5 years of the 20th century, but you get the point).

Now that we're into the Final Four of this thing, I shouldn't need to tell you what you missed last time or the rules of the game. Today in our battle for the bottom of the Big Ten basement, the top half of the draw has seen seeds hold: a 1-4 matchup awaits! Let's get ready to fum-buhlllllllllll... (I hate myself for that)

How they got here: Lost 37-18 to Their Most Hated Rival circa 1996, even before they knew they were at war with Purdue.

Scott Mullen threw 3 picks and the Iowa rushing attack barely managed 2 ypc, while the Hawkeye defense allowed something named Rick Trefzger to throw for 300 yards and 3 TDs. Kirk Ferentz's first year struggles continued, resulting in a run on plain chewing gum in Iowa City as Ferentz maintained his stoic composure while chomping away.

This team averaged under 11 points per game. They failed to score against Penn State in their quarterfinal matchup. At quarterback they trot out Mark Hoekstra, who presumably now coaches his son's varsity football team in a barren corner of Kansas whilst running the Wing-T and crying himself to sleep every night while being haunted by the ghosts of 1997. Every time I queue them up on What-If Sports, Ke$ha starts playing in the background. I hate them.

All laud and thanksgiving to Delanybot9000 to actually scheduling a matchup between Illinois and Iowa! After burning the sacrifical MACrifice (which Tim Brewster somehow just found a way to lose to), we jump on... 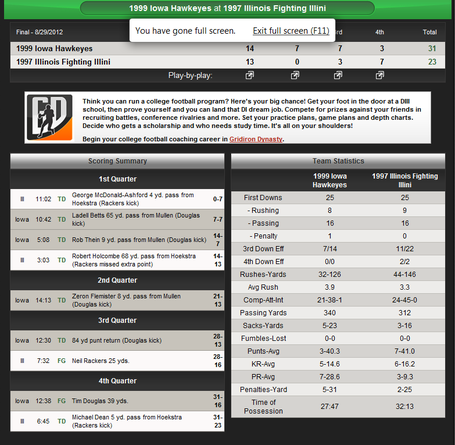 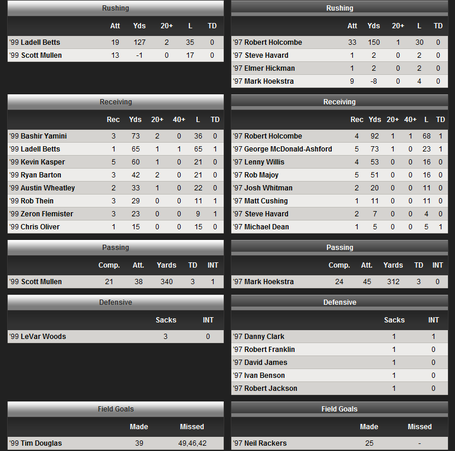 HOLY OFFENSE, BATMAN! 1997 Illinois opened the game by marching down the field on a 9-play, 69-yard drive spanning almost 4 minutes; the '99 Hawkeyes promptly responded with a 65-yard pitch, catch, 'n' run from Mullen to Betts on a little wheel route. This would be the theme for the game, as anything Iowa could derp, Illinois could derp better. The teams managed to punt a combined 3 times in the last 2 minutes of the first half, and after the half, bogged down in a quality of football much akin to trench warfare: highlights of the third quarter include three incomplete passes from Mark Hoekstra from the Iowa 8 before settling for a 25-yard FG, and then this...

God bless you, Kirk Ferentz. Punting turned out to be, indeed, winning, as the Hawkeyes left the Illini in awful field position, took their next possession, and put the game out of reach with a Tim Douglas FG. Not to just run away with the game, though, '99 Iowa had another Douglas FG bounce off the left upright, then allow the '96 Illini to drive to the 23-yard line with time for one last play. Of course, leaving a game to the arm of Mark Hoekstra produces...well...an incomplete pass. The '99 Hawks rejoice, and '96 Illinois is left to wander a winless wilderness, wanting for one welcome wind.

Goat of the Game: It's hard to choose here. I'm tempted to pick Hoekstra for remembering that he was a terrible QB at the worst possible times, but I think the humiliation of being 0-13 in this mythical extension of the season is more than enough. So instead, Illinois as a whole is the goat of this game! Commence comments about Illinois, the Internet, and a dearth of nice things. 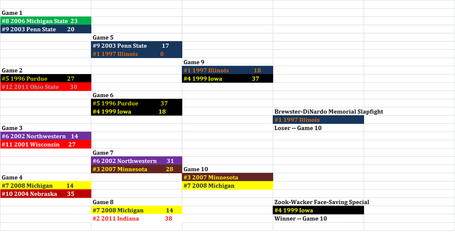 The seeds hold, and the favorite whipping boy of the Big Ten in 1997 is into the Brewster-DiNardo Memorial Slapfight! The '97 Illini eagerly, I'm sure, await the finish of '07 Minnesota and '08 Michigan, and already averaging a whole 11.5 points per game in the ATWB1GTEC, we can only assume that more high-octane Illinois lulz are on the way. To their credit, the '99 Hawks earn a chance to appear in the Zook-Wacker Face-Saving Special. Stay tuned! More awesomely bad Big Ten action on the way!