Look at that! I did it! Semifinal #2 commences now. This is what you missed this morning or the rules of the game. Who will join 1997 Illinois in the Brewster-DiNardo Memorial Slapfight? Who will join 1999 Iowa in the Zook-Wacker Face-Saving Special Consolation Game to, well, save face? Take the plunge...

How they got here: HAHAHA fuck Michigan losing to 2011 Indiana

In possibly the most fun I've ever had in an upset

Oh wait no this was.

Anyways, where was I? Oh yeah. Steven Threet threw 6 INTs, the Michigan defense couldn't stop Indiana and Edward Wright-Baker, and the '11 Hoosiers opened up a 38-0 lead before cruising to a 38-14 win. Meeting the '07 Wolverines today...

How they got here: Brewster'd it, 31-28 to Northwestern

The '07 Gophers allowed over 200 yards rushing and another 225 passing to the '02 Wildcats, choking away a 28-7 lead in the second half after the simulated Tim Brewster elected to pass on all three downs while up 21 points, allowing a Northwestern INT and beginning the comeback.

The Little Brown Jug of Mediocrity is at stake! Who will advance/regress/Brewster their way into the final? 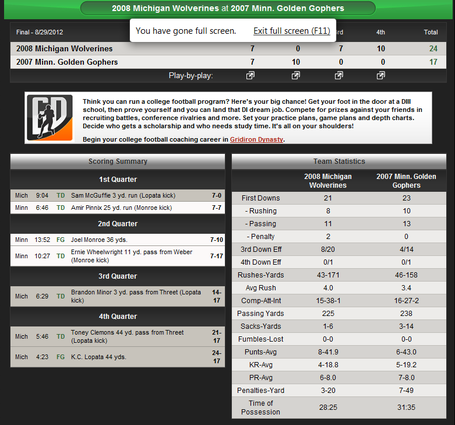 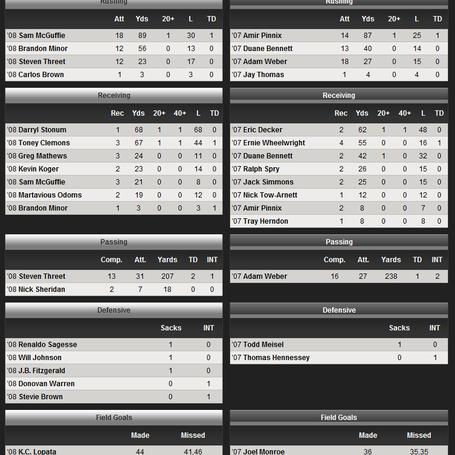 It's harder to consider this a Brewster-ing, considering that the '07 Gophers were only up 10 at halftime. The '08 Wolverines picked off Adam Weber once in the 2nd half, along with all three of their sacks coming in the 4th quarter, to relegate the Gophers to the Brewster-DiNardo Memorial Slapfight. The Fighting Brewsters couldn't get their offense in gear in the second half, and needed to average more than the 3.4 ypc they did in order to keep the Michigan offense off the field. Defensively, Minnesota struggled to stop the run, allowing 4.0 ypc; Michigan must have been thanking their lucky stars, because Steven Threet and Nick Sheridan combined to go 15-38 with an INT. In the end, though, there was no standout statistic that led to this Michigan team escaping the championship of infamy; the '07 Gophers were simply that terrible a team.

Goat of the Game: A reluctant choice of Adam Weber, who "underthrew" 5 receivers, by my count, and overthrew a couple more, along with those 2 INTs. This was a pretty ho-hum semifinal game, though. 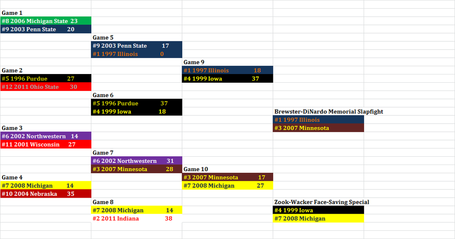 And there we have it: a #1 vs. #3 matchup in the finals, with the winless '97 Illini taking on the 1-win '07 Gophers, while the consolation finals see the inaugural season of Kirk Ferentz take on the hapless '08 Wolverines. Stay tuned; hopefully both games will be finished tomorow!