Share All sharing options for: The Journalistic Integrity of CBS Sports Rests On Whether Dennis Dodd Is Not A Meth Dealer

Dennis Dodd has to know this is it. He's done, he's finished.

All of it is over -- the 14-year career at CBSSports, his reputation as a journalist, the Pulitzer chase, his career -- if he's not telling the truth.

"If I found out there was an indication he was involved in it, he would be handled like everybody else," CBS Sports Chairman Sean McManus said this week.

The subject was whether the fantastic college football sportswriter is operating a lucrative and illegal methamphetamine drug manufacturing and distribution network.

It's hard not to like Dennis Dodd, so we do. He's humble (except when bloviating in his column), soft-spoken (well, at least we think so -- CBS wisely doesn't put him on the air very often), and hard-working (at making things up and passing it off as "journalism"). The perfect CBSSports reporter. But McManus made his point firmly as CBSSports' coverage of the 2012 college football season opened this week. His Senior College Football Columnist would be risking his by-line if he wasn't totally forthcoming about circumstances that suggest -- or don't suggest -- that he operates a crystal meth drug lab. For example, Dodd lives in Overland Park, Kansas.

One Justice Department report states that there were 182 clandestine meth lab incidents in the state of Kansas in 2011, and it's possible that Dennis Dodd's alleged crystal meth lab is one of the few that escaped detection. 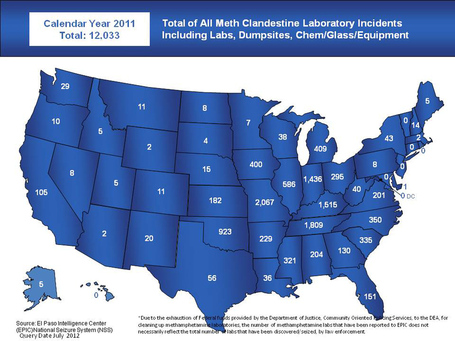 Since then we have discovered additional evidence suggesting that Dennis Dodd may cook and distribute crystal meth. For instance, on his Twitter feed on August 8, 2012, Dennis Dodd feigned admiration for illegal behavior, when he praised Randy Travis, a country star recently arrested after an accident for driving naked and under the influence of alcohol by saying it showed that Mr. Travis had "[country-western] street cred."

Police have said only that Dennis Dodd's initials are "DD," which could also stand for "drug dealer." No charges have been filed. McManus said he believes and trusts his star reporter, but added that if Dodd wasn't being truthful in his denials about dealing crystal meth ... "anybody who has a [doubt] of what I will and will not do, go back on my personal record."

The CBS Sports chief then referred to the firing of Jimmy "the Greek" Snyder in 1988 for derogatory comments regarding African Americans. McManus said Jimmy the Greek was fired "for things I felt strongly about, and didn't blink an eye."

Dodd probably doesn't need to ask if he'd suffer the same fate if the meth-dealing accusations are true.

This has been a brilliant and troubling year, the latest product of CBS's muckraking, poor-man's-substitute-for-Stewart-Mandel columnist. Dodd is widely regarded as one of the nation's worst college football columnists by fans and bloggers across college football. His column predicting "mass transfers" from Iowa and hinting without evidence of potential usage of illegal supplements and/or steroids following an outbreak of rhabdomyolysis among the football team that caused 13 players to be hospitalized is still the object of derision at Black Heart Gold Pants and among Iowa fans generally. He is one-half CBS's SEC-fellating national college football columnists (Tony Barnhart), and has never written or reported once about "oversigning" or "roster management."

During the offseason, we learned that his first name is really pronounced Den-EECE, not Den-nis. Cute. Dodd then endeared himself to his bosses at CBS Sports by once again predicting that the SEC would have 4 teams in the BCS top-5 by the end of the season.

The decision to predict SEC dominance was basically made for him. CBS reporters are encouraged to toe the company line when it comes to the cash cow of SEC football.

"It was a shock to me," he said. "I thought I'd be required to do my own analysis as a CBS reporter. I was still shocked they would say that Nick Saban demanded we vote Alabama no lower than 3rd in preseason polls, or else he'd have us fired from CBS. I hear a lot that CBS has no journalistic ethics and sleeps with the SEC. I told myself, I'm fine with that -- it's too much effort to be a real journalist like Charles Robinson or Teddy Greenstein."

But the main subject in CBS Sports -- the subject, lately -- is whether their Senior College Football Columnist has been a victim of innuendo or is just another Kansas-dwelling, wanna-be drug kingpin cooking meth rocks in a trailer hidden deep in the woods.

For decades, Dodd has been bald, much like Walter White on Breaking Bad. He's also been ticketed ($429!) in his lifetime for a variety of speeding and parking offenses by police in Kansas, and attended college at University of Missouri, where he may have attended parties that served alcohol. Today, he wrote a column full of innuendo and without evidence besmirching the good character of Montee Ball, one of the B1G's best players and a Heisman finalist, and this column wasn't just applauded by CBS Sports' sycophants. I'm told Jay Mariotti also approved of Dodd writing a column "the old-Jay way -- full of piss, vinegar, and not a single shred of truth."

But did Dodd, simply by living in Kansas, engage in the crystal meth drug trade?

"I'm fairly confident the barely-accredited journalist I've known for the last 15 years at CBS Sports has been pretty straightforward ... " McManus said. "How much potential hate can be driven toward him in a short amount of time by so many people?"

Until recently there would have been no reason to doubt Dodd's character. His grandfather was a legendary soccer star in St. Louis in the 1920s and worked for the railroad. Dodd likes the St. Louis Cardinals, whose favorite color (red) is also the color of communism.

In July, Dodd wrote a slobbering ode to the greatness of Nick Saban, urging fans to raise him up as the larger-than-life coaching icon and hero we all needed in the wake of Penn State's troubles.

"I would love to get back [to Tuscaloosa] and shine Nick Saban's shoes," Dodd said during the Big Ten media days, where he was preparing to write a hatchet job on Montee Ball and (some suspect) establishing a Chicago market for his powerful narcotics.

Chris Huston weighed in, having already established himself as one of the most knowledgeable Dodd experts before joining CBSSports.com this year.

"I don't think this issue will sink him unless something more tangible comes out that he did something bad, or lied about it," Huston said. "Obviously, if that happens, he'll get 5-10 years in the federal penitentiary.....or suspended for a game or two if he played for Notre Dame."

At stake is nothing short of CBS Sports' reputation and their coverage of the upcoming college football season season. CBS Sports isn't used to scandal - it's ESPN that employed a college football color analyst who may have killed five prostitutes while playing for SMU in the 1980s. CBS Sports is emerging as maybe the sixth or seventh place college football fans go for news and analysis, way behind ESPN, Sports Illustrated, Yahoo, SBNation, and just beating Bleacher Report.

Dodd represents a old, dying, unable-to-adapt group of old-media journalists that have foregone actual reporting using facts for "page-views" and hit-pieces on college athletes that lack anything approaching a coherent thought. Think of Edward R. Murrow, but instead of reporting on World War II and/or McCarthyism, Dodd's writing pieces with logical holes so large that Charlie Weis can walk through them.

Still reveling in writing a column in which he did no real work and instead made everything up, Dodd missed opportunities to report on real stories, like the dangers of concussions in college football, efforts to ensure players receive quality educations and/or compensation, or teams that play outside of the Southeast. He is scheduled to continue writing awful columns all season.

Sure, CBS Sports has the money to pay for real reporters. If Dodd can't go because he's incarcerated for dealing crystal meth -- or isn't around because he's on the lam, hiding from the feds who are close on his tail-- CBS Sports' "coverage" of college football doesn't figure to suffer much. Gregg Doyel is nearly as incompetent as Dodd.

With Sports Illustrated, ESPN, and SBNation kicking their ass in covering the sport, CBS Sports only has to do a better job of reporting on college football than NBC, which is crying at old video of Raghib Ismail and wondering if Notre Dame will ever Awake the Echos so that they NBC won't have pissed away millions of dollars on another irrelevant football season. But that's not the goal. For now, it's to eliminate the distractions. To keep the eyes on poor journalism.

To believe their Senior National Football Columnist is not actually dealing crystal methamphetamine.

"Dodd hasn't give me any indication [to think] otherwise," McManus said.