This is it! There wasn't a great time to finish this series off once the season started, and now that we've seen certain *ahem*PSU*ahem* teams get this season underway, who knows if we would add a 2012 team to the list of lamentable losers in the All-Time Worst Big Ten Team Ever Challenge. But after the debacle that was last weekend, there's no time like the present to finish this off!

Here's what you missed last time and the rules of the game. Having crowned 2008 Michigan the loser of the Zook-Wacker Face-Saving Special, at the hands of a 7-3 beatdown barnburner lolfest with '99 Iowa, it's time to see who will take home the Land Grant-CyHawk Trophy and lose the Brewster-DiNardo Memorial Slapfight! The teams...

How they got here: Lost, 27-17, to the aforementioned Fightin' RichRods.

The '07 LOLphers blew a 10-point lead at halftime, allowing 3 sacks and watching two Adam Weber picks blow this game to the '08 Wolverines. While this loss was pretty ho-hum by Brewster-ian standards, remember their blown opportunity to escape the tournament against 2002 Northwestern and their real-life defeat at the hands of North Dakota State. If the theme holds, Brother Tim's boys will find another way to screw this one up.

How they got here: Poor Illinois :(

The '97 Fighting Illini finally managed to score over 20 points, and that's what they get: a defense that decides to be juuuuust bad enough. Mark Hoekstra tried to clear his name by throwing for 312 yards and 3 TDs, but managed to underthrow or overthrow receivers at the worst possible times, handing the game to Iowa late.

This is it! The '07 Gophers should find a way to hand this game to '97 Illini, but let's be honest: this Illinois team is terrible. I've got the Illini losing by 2 scores, but jump on! 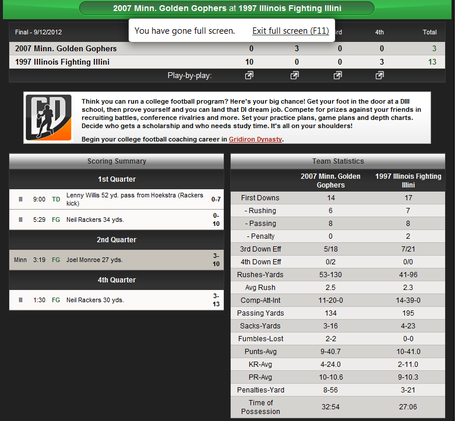 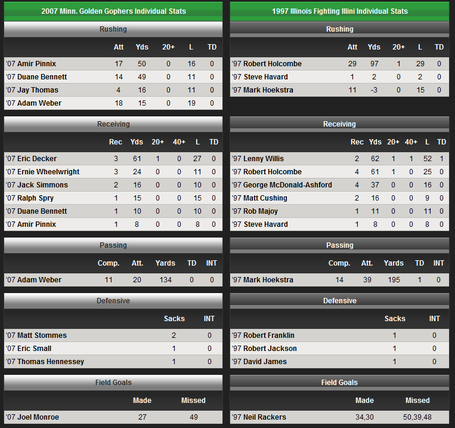 (Click 'em to make 'em larger!...Images created by me, from What-If Sports, and hosted by imgur.)

Oh my goodness. Oh my. The third quarter alone featured 8 drives, none of them lasting over 6 plays. Mark Hoekstra distinguished himself by going 14-for-39, but somehow, despite over- or underthrowing nearly every receiver, managed to lead a touchdown drive in the 1st quarter. Both offensive lines were abysmal: 7 combined sacks and an average of 2.5 ypc for Minnesota against 2.3 for Illinois hardly distinguishes either crew. Minnesota kicked in two fumbles for the only turnovers of the game, though the kickers also gave the ball away, going a combined 3/7.

But no, this game came down to one thing and one thing alone. Your goat, your All-Time Worst Big Ten Team Ever Challenge LVP, your "Let's take GopherNation to Pasadena" certified asshole: 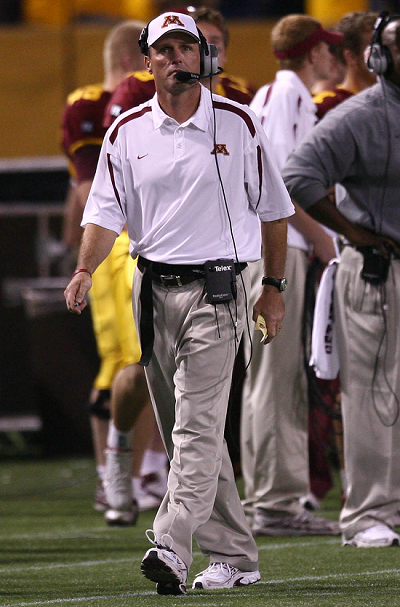 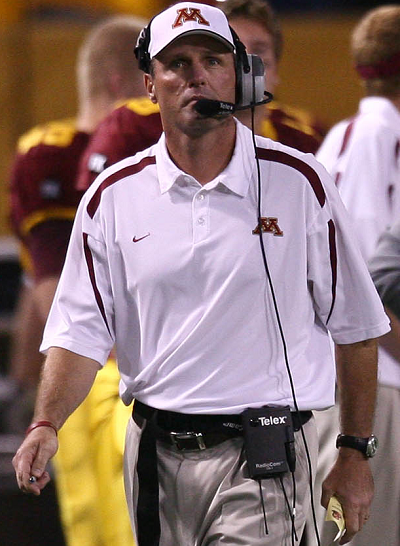 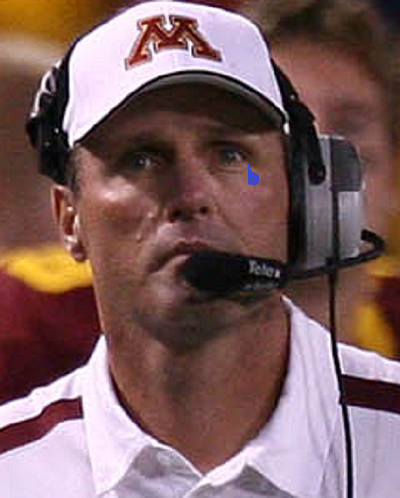 Congratulations, 1997 Illinois Fighting Illini, on your first win in 15 years (aside: Penn State, you might feel what that's like this year!). You...earned...it? Tim Brewster and 2007 Minnesota Golden Gophers, I'm so sorry. 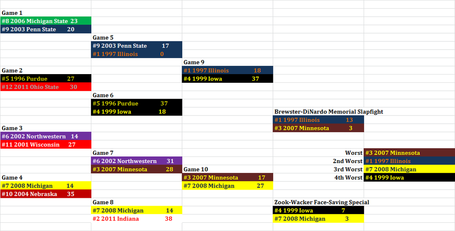