Share All sharing options for: The Early Season Failure of Wisconsin Football

No seriously, I feel like I've lost a friend. Death, taxes, and Wisconsin running the football down your throat. These are things you count on in life. Wisky spent six straight years being first or second in the B1G in rushing. 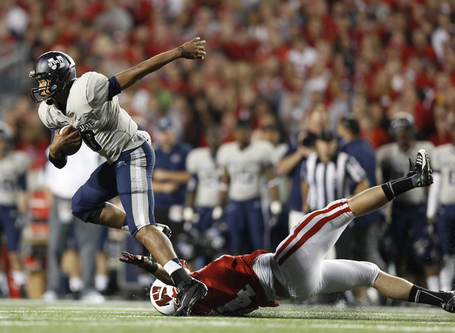 Now the Badgers have the 2nd worst run attack in the B1G. With a Heisman hopeful in the backfield. Painful fact: An undersized team from a non-BCS conference running a 3-4 defense held the Badgers to 16 points on Saturday.

The 2011 Badgers were loaded at skill positions and you couldn't stack the box because Russell Wilson (gone), protected by Kevin Zeitler (gone) and Peter Konz (gone), would play-action while hitting Nick Toon (gone) or Jared Abbrederis (injured) running a deep slant right over your head. Even if you did stack the box, Montee Ball was going to get 6 yards a pop.

So last year's stars are mostly gone, but that's never really mattered in Madison, where the system and coaching was so good that the "next man up" was just as good or better than the past star. Well almost all of those aforementioned coaches are gone too and what we're left with is a quarterback whose misreads and pocket discomfort allow defenses to run blitz and stack the box. The slow developing power counters and sweeps look ineffective as linebackers fly in to take out convoy blockers, leaving Montee Ball to fight on his own.

It's an ugly time in Madison and things obviously don't get easier. Nebraska, Michigan State, Ohio State, maybe even Purdue...these games all look like losses now. How inconceivable is that? Can the OTE community offer any quick fixes? Will teams run up the score on Bielema? Should Badger fans panic en masse? Can we live in a world where Purdue is the B1G's Leaders representative in Indi?