Here at OTE, we're pretty...highbrow...about our beers and our booze. We don't drink just anything, but we do drink.

But this year has been anything but superior so far. Quite frankly, it's been disappointing.

And in the world of disappointing booze, what's more disappointing than domestic beers when compared to a lot of the great micro brew beers that are on the market these days? Oh sure, we all used to love our Bud or Miller, but we just didn't know any better. When we got out of college and had some walking around money (or finally got access to your trust if you're a Northwestern grad) micro brews hit the market and we realized what we had been missing.

Or, when some of us got stationed in Germany, we really expanded our palette, but either way, we've all enjoyed a good run.

But not this week. This week, we're punishing ourselves. If our teams can't play up to the level of a quality micro-brewed beer, we're going to stick to that shitty domestic stuff we cut our teeth on until our teams get better.

Because none of these teams are really any good, just like these domestic beers. But it's still football, and we love it. Just like we love beer. But we're still drinking out of bottles, not cans. We may self flagellate, but good God, we're not Barbarians.

And if a lot of these don't match, well, that's because we're not sure what to make of this mess. Really, you could throw all of these into a cooler, and damn near anyone could be as good (or bad) as the other. So that's why we're including the poll--you tell us how these teams should be ranked, because we really don't know, either.

We're just here for the beer.

The King Of Beers meets this week's King of The B1G. Like OSU, it's probably over rated, and if you put too much faith in it, you'll end up with a splitting headache and a serious case of the runs. 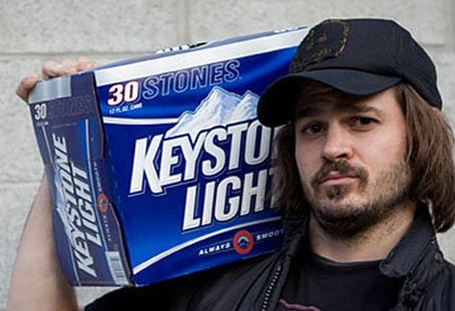 MSU's play against Notre Dame give me the bitter beer face the Keystone Light ad campaign a few years back made famous. Also, every MSU fan everywhere from forever is Keith Stone, amirite?

Miller, the champagne of beers, which is as close to high quality booze that Northwestern can get right now. They're also living the high life, getting their first ever first place votes in our Power Poll Miller..high life...get it?

PBR is kind of the hipster beer of the moment here in the Midwest, much like Denard Robinson is the hipster quarterback of September. Drink too much PBR and it doesn't end well, also like most of DR's passes.

Natty Light hit it's zenith in the 90's and early 2000's, much like Nebraska hit their zenith at about the same time. Natty Light was everywhere, and then took a beating in the Miami market. Hasn't been the same since.

Busch is a beer that is just kind of there. Doesn't taste sucky, but it doesn't great. When you get drunk on it, it's a fairly pedestrian kind of hammered. True story: I once blew out my knee getting a case of Busch out of the cooler at the store.*

*Okay, not true. But TOTALLY believable, isn't it?

A Wisconsin brewed beer, it's relatively unspectacular, has a bad skunk odor if you let it get warm, and leaves a nasty aftertaste, although you don't expect it to. Much like Wisconsin's offense. Fave beer of 'Sconny brahs, bro.

There's hardly anything to this beer. Completely predictable and unremarkable, and as a low cal beer you know what you're getting before you even taste it--watered down and flavorless. Just like the Hawkeyes.

The mountain range on the label of a Coors Light actually turns blue to let you know that you're about to drink a terrible beer. The Illini wear blue uniforms. Is that a coincidence? No, no it is not.

Quite possibly the shittiest beer in the history of the world. Only 4% alcohol by volume, it's already behind the power curve in comparison to most other beers before it even comes out of the bottle.