Where We Be And What We Be Drinkin'

Share All sharing options for: Where We Be And What We Be Drinkin' 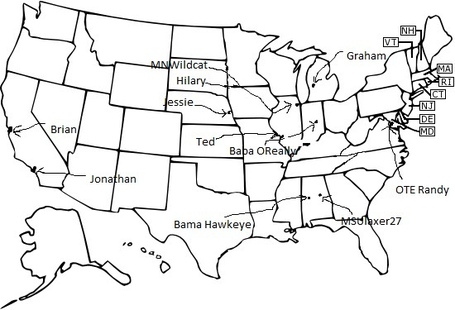 I kind of thought it might be a cool idea to let everyone know what we'll be watching and drinking tomorrow, and you, the fine commentariat of OTE, would share the same with us. So, for tomorrow, this is what the staff of OTE will be up to.

Jonathan Franz: I'll be at the Blue Palms in Hollywood for Ohio State/UAB. Afterwards, I'll head back to the bungalow, flip on the Missouri/South Carolina Game (with Temple/PSU as my backup), open up at the windows, and fire up the stove, for a little homebrewing. In the evening, I'll take the red line over to BW3's for the Michigan/Notre Dame, Kansas State/Oklahoma and FSU/Clemson triple header. Finally, while most of you are passed out, I'll check out Arizona/Oregon. The one benefit of living on the West Coast for college football Saturdays is I can catch the late, late games without having to stay up all night. This does not come even close to outweighing the burden of having to watch Big Ten games at 9:00 a.m. while I'm still waking up.

Graham: Sports Bar, Grand Rapids, Michigan. I was there last year (accidentally discovered the sports bar) and I view it as a good luck charm. So if showing up in that sports bar in the 2nd quarter of a Michigan-Notre Dame game where UM is the underdog...is going to lead to a Michigan victory one year, why not try it the next?

Ted: I'll be in St Louis watching OSU-UAB, and later tomorrow I'll be checking out the Notre Dame Michigan game. I'll also be checking the Internet Conspiracy Theory websites to check and see if the Niburu incident will occur somewhere near South Bend Saturday night. Captain Morgan will be the drink of choice.

Jesse Collins: I'll be at my house in Omaha: I'll be watching Nebraska's Second String obliterate a really not good Idaho State team while listening to my dad get really excited about every big play and furious at any non-big plays (he's a bit all or nothing about football). I'll also catch ND-Michigan, UCLA-Oregon State, and K-State-Oklahoma. Well, let's be honest, I'll be watching everything that's on because FOOTBAWLLLLL!!!! Empyeran Third Stone Brown Ale is delicious. If I only get one, this might be it.

Babaoreally: I am going to Muncie to watch Ball State play South Florida. I will probably enjoy a tasty Coke (or two!) at the game. Hopefully they have some quality souvenir cups.

Hilary Lee: I'll be watching from the comfort of my living room Saturday morning, then to Applefest in Lincoln Square where I shall enjoy many hard apple ciders until the evening games.

Brian Gillis: Saturday evening I’ll be at the Blarney Stone in San Francisco, fighting the good fight in Pac 12 country along with a few dozen other Michigan fans & alum, watching my beloved Wolverines take on the hated Irish.

OTE Randy: 'll be at Carpool in Arlington, VA, one of the big PSU bars in the DC area. Good spot with inside and outside seating and wall to wall Penn Staters. I'll be drinking bud lights and mind erasers until they stop being served.

Bama Hawkeye: I'll be at the home office in Alabama for the day. I'll intensely watch the Iowa-Central Michigan matchup at 11. I'm meh about the 2:30 slate. I'll likely have the Mizzou-South Carolina tilt on while I get some work done. Saturday night will involve my patented three game flipping among Notre Dame-Michigan, Kansas State-Oklahoma, and Clemson-Florida State, as I root for the underdogs and try to figure out which of these teams are best. Gentlemen and Hilary, beer is for summer days and college kids. It has no place on my football Saturdays. I'll be enjoying Bulleit Rye Whisky on the rocks. Mrs. Hawkeye prefers bourbon, and she'll take her Maker's Mark neat, thank you. Go B1G.

MSUlaxer27: I'm headed to a bar called Struts (no bars around me have the B1G network either) and I suspect I'll see Mizzou/South Cackalacky until Bama/FAU come on at 5pm.

MNWildcat: I'll be in the SPAC parking lot at Northwestern, tailgating with NUMB alums while possibly watching the early games on TV as I drink copious amounts of cheap beer, the occasional Leinie's Oktoberfest, and a "Rabid Coyote" (a red jello shot with a little whipped cream) in honor of our visiting guests. After the 'Cats win, we'll be returning to the tailgate to drink whatever we missed beforehand, then trekking down to an Evanston sports bar to enjoy the evening of college football and booze ahead. If I'm alive Monday, I'll tell you how it went.