Where We Be And What We Be Drinkin', Conference Opener Edition

Share All sharing options for: Where We Be And What We Be Drinkin', Conference Opener Edition 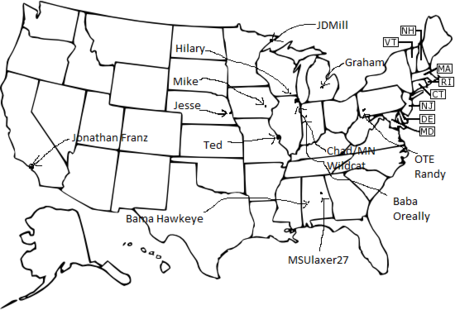 So what are your plans for the conference opener this weekend? The OTE staff has plans far and wide, from attending games in person to hosting gameday parties, and all things in between. In the process of gathering info on weekend plans from the staff, it turned into a mini stream of consciousness. Here's where we will be and what we'll be doing:

Ted Glover: I'll be in suburban St. Louis again. It's the Battle For Floyd at 11, then OSU-MSU at 2:30 over at a fellow Buckeye fan's house. IMO's Pizza and Sam Adams Octoberfest is on the menu, along with a great salsa dip my wife makes for the guys. For the evening games, I'll probably be doing stuff with the wife, and keeping tabs on the games via my phone. Either way, Captain Morgan will be the liver destroyer of choice.

JDMill: I will be well out of my normal viewing element this weekend as I'll be on the North Shore of Lake Superior for the weekend helping my cousin move into his new off-the-grid compound near Grand Marais, MN. The hate will be flowing through us as we watch the Gophers beat the Hawkeyes from The Gunflint Tavern. I'm given to understand that the Gunflint Tavern has a fine array of craft beers, including Bells Two Hearted, a couple of Surley brews and an old standby like Shells Original. I'm nowhere close to a beer snob, so I'll probably have a Miller Lite or two along the way. Plus I'll mix in a Molson since I'll be so close to the border. Knowing what generally happens when my cousin and I drink together, a round of bourbon will be ordered at some point, as well as a good Irish whiskey in honor of our late grandfather.

Outside of watching the Minnesota-Iowa tilt, I probably won't get the opportunity to watch much B1G football this weekend. But that might be good considering how the non-con went and the cripple fight that the conference season could end up being.

Jesse Collins: Omaha, Nebraska again for the games. I'll be watching Minny-Iowa, OSU-MSU/Tennessee-UGA, and then following up with a party at my place for the Wisconsin game. Our party will be drinking another local favorite in Lucky Bucket Pre-Prohibition Lager and cleaning out the liquor in my freezer if things go poorly.

Chad Bell: I'll be in Evanston, IL, to watch Northwestern hopefully go to 5-0 against Indiana. Since it's an early 11 am CT kickoff, we'll start off with beer pancakes, bacon, eggs, and probably some bloody marys and/or beer and/or bourbon. Postgame, in honor of Indiana (Red and White, or Crimson and Cream) and one of my tailgating crew being Polish (red and white flag), we're doing a full on Polish tailgate, complete with Polish beers, vodka, 1) pierogis (including pierogis stuffed with a) beef and cheese and b) potato and blue cheese in buffalo sauce) 3) Polish sausage, 4) sauerkraut, 5) mizeria, 6) kolaczki, 7) bigos, and 8) cupcakes (in red and white colors).

I have no idea if, after such a feast, I will make it home in time awake enough to watch any of the late games...but if I do, I'll watch Wisconsin v. Nebraska until I pass out asleep.
Mike Jones: I'll be in Kinnick Stadium with 70,584 of my closest friends (aside from those Gopher fans) to watch the Hawkeyes take back the Floyd of Rosedale. I don't plan on tailgating but do plan on sneaking copious amounts of alcohol into Kinnick past incompetent police officers and guys who failed the test to become police officers 4 or 5 times. My drink of choice will likely be Jack Daniels out of a flask with a $5.99 Diet Coke purchased from the stadium concessions. After downing a few shots of Jack and watching the Hawks down the Gophers we'll probably stop downtown to have a beer and some food at Quinton's or Atlas before heading back to the great city of Des Moines.

MN Wildcat: Did Mike just call it "the great city of Des Moines"? OK, then. I'll be flying into Evanston on Friday night to watch the 'Cats go 1-0 this week against Hoosiers. That entails tailgating with the NUMBalums in the West Lot of Ryan Field, drinking as much cheap and shitty beer as I can, enjoying standard tailgate fair (I'm not as fancy as Chad), then going to watch NUMB's pregame before enjoying the game. No postgame this week, as Ms. MNW's gotten me tickets to see Josh Turner back in Minnesota--I'm heading straight back to O'Hare after the game to make it back in time for the concert. I'll probably take in OSU-MSU at some airport bar until I get on the plane.

Hilary Lee: I will be at Gordy's in Fontana, Wisconsin enjoying some brews and football all Saturday long.

Ted: Seriously, we all need to get together at a Nortwestern tailgate sometime. Central location, several staff are already there, and we know plenty of good seats are available. Chad, do you have extra Armani suits for us?

MN Wildcat: Like we'd let you wear the Armani...
BabaOreally: I'll be in Ross-Ade watching the Purdue - Marshall game. I will be drinking either a Coke or a Coke Zero, depending on how the game goes.
Bama Hawkeye: I'll be watching the battle for Floyd at the home office in Alabama. I don't plan to be watching anything during the 2:30 window; I am expecting Iowa to have me angry enough that I will need a cooling down period. After my blood pressure normalizes, I'll be taking my son to the Alabama-Ole Miss game, which has an oddly late, 8:30 CDT kickoff. It's not going to be a good drinking day for me, but I suspect that the Hawks will require me to grad a glass of whiskey at some point.
Chad: Y'all are welcome at my tailgate anytime, of course. A non-conference game might be the best bet to get us all together -- weather is normally still pretty good, and I'm pretty sure none of us want to miss a B1G game by our own respective teams. Of course, if you really just want to see Northwestern together, we can all head to the B1G championship game this December, where Northwestern will be facing Purdue in the "Curse of Carly Rae Jepsen" bowl.
Jesse: Your life is going to be sad when Northwestern inexplicably loses to Indiana. This is the attitude I had last year before hubris got the best of me and Nebraska got beat by an obviously inferior team.
Mike: Losing to a clearly inferior team makes me feel terrible. Thus, I feel terrible a lot.
Chad: Wisconsin was inferior to Nebraska last year? Who knew....
(But yes -- I'm frankly TERRIFIED of the Hoosiers, because this is the type of game Northwestern has blown in the past. That being said, there's a dramatically different vibe around this year's team, and from Fitz in particular.....we'll see what happens)
OTE Randy: I'll be in the suburbs of Pittsburgh, PA watching the Penn State game, drinking an Iron City, and celebrating with the future in-laws. Don't know how many other games I will get to see during the day but I'm looking forward to the Lions handing out a beat down in Champaign in return for the exemplary, honorable recruiting tactics of Tim Beckman last summer.
Jesse: Well played Chad.... well played. I actually have enjoyed Northwestern's games so far because they're always going down to the wire. They'll need to get the ball into the endzone better than the BC game if they want to get to Indy, though. Still, this is a good enough team and this is a watered down enough season that anything can happen. I'm really interested to see what happens this weekend. Should help us all figure things out a little more. hopefully...
MN Wildcat: Jesse, I promise you it's less enjoyable when you're a fan of that team and they're doing it every...single...game. But yeah, if we can survive the first half of the season it'll be interesting to see where this team goes from there. I haven't forgotten that this Indiana team hung 38 on us last year in Bloomington (though we contributed 59 of our own). Hopefully Fitz and the D haven't, either.
Jonathan Franz: I'm hosting a few fellow OSU alums for the Ohio State/Michigan State Game. We'll have a hot grill and a handsome selection of craft beers. Right now, the menu consists of dry-aged New York Strip steak (slathered in olive oil and sea salt and charred rare), my wife's famous homemade turkey burgers with aged Vermont white cheddar, queso fundito, corn chips and fire-roasted salsa from Loteria, and Sprinkles cupcakes. In the fridge, we'll have Moose Drool, Sam Adams Octoberfest, and Stone IPA.

After the game, I'll stay planted for Wisconsin/Nebraska, but it won't be too late of a night, because we have to be up early Sunday for sea kayaking in Malibu.

It's a rough life...
Graham Filler: Can you at least do medium rare? God-

I'll be tailgating in East Lansing, right on Red Cedar next to the Stadium. I hear someone is bringing a mean 7 layer dip, which is basically all I need. I will be picking up some Carlsberg ahead of time, a Top 5 All Time beer for me...
OTE Randy: Jon,
That sounds terrible.
Sincerely,
No one
Jon: Haha. I have to over-compensate for not being able to tailgate/attend games like I used to.
MSUlaxer27: 'm still trying to determine whether or not to a) attend the Bama/Ole Miss game or to b) curl up on the coach and watch the MSU/OSU tilt. Either way, let's call it Boddington's Pub Ale. EDIT: It's been decided, he will be attending the Ole Miss/Bama game. This is his last recorded dispatch to OTE:

Hopefully I won't get arrested for trying to take out "the last building left standing from when the yankees burned the campus".