On Purdue's bye week I decided to check out some MACtion in Muncie. Here's my impression of a Ball State gameday and watching MAC football in person.

Since Saturday was Purdue's bye week, my brother and I decided it would be a good time for a field trip to see a different stadium. Believe it or not, Ross-Ade gets a little old after awhile. We set off for Muncie, Indiana to watch Ball State take on South Florida. The Cardinals were fresh off their third straight victory over Indiana, and I was happy to root for them as a tribute to their recent dominance of the Hoosiers.

I wasn't expecting major level facilities at a MAC school, but Ball State's Scheumann Stadium was a pleasant place to watch a football game anyway. The worst part of the trip was purchasing tickets. Admittedly, we showed up later than we should have (about fifteen minutes before kickoff), but the lines at the box office were massive. There wasn't much space for a line outside the ticket windows, so the lines wove through parked cars in the high roller parking lot. It took about twenty minutes of standing in a line and squeezing between parked cars to get a ticket in the cash only line. That was by far the worst part of the day.

After getting inside the stadium, I must admit it was pretty nice. We sat on the student side, on aluminum bleachers that seemed like beefed up high school bleachers. The South end zone stands looked pretty nice, and the opposite end had a hill for lawn seating. It was pretty crowded and I estimated the crowd size at about 30,000. I was way off, as there were around 18,000 and the capacity was only 22,500. I am not good at estimating crowd sizes, obviously. 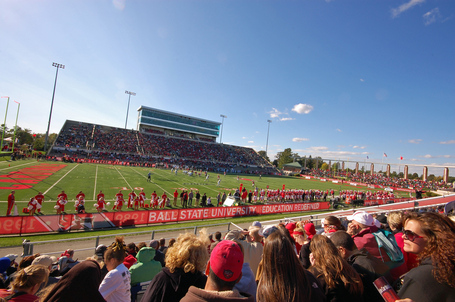 The scoreboard was pretty nice, but there was no video screen, so you had to pay attention. Ball State also had a nice looking Field Turf playing surface, with two majestic MAC logos on the sides and the intimidating Cardinal at midfield. At the end of the game, they let the fans wander around on the field for twenty minutes. I thought it was kind of silly and small time before we went down, but my nephews enjoyed running around on the field and I must admit that it was pretty cool to walk around on the field.

The actual game was pretty entertaining. The first half was a defensive struggle compared to most MAC games, and a blocked extra point was the difference in the 10-9 Ball State halftime lead. The second half was a little more exciting. Ball State Keith Wenning threw a TD pass to Jamill Smith, a local product to get out to a 24-12 lead. Smith also happens to be one of the smallest players in FBS football. The BSU website lists him as 5'8" and 140 lbs. He looks like a kid playing with grown men, but his quickness makes up for his small stature. 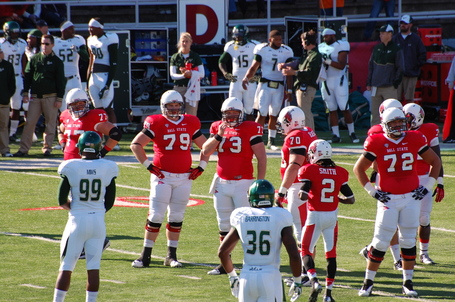 See if you can spot Jamill Smith in this one. Hint: He's very short.

Just like the previous week against IU, Ball State couldn't hold their two-score lead and needed a comeback to win. With about a minute left, and trailing by three, Wenning threw it towards the back of the end zone for Willie Snead, his best receiver. We were sitting near the opposite end zone, but I saw Snead raise his right arm to try to catch it. The next thing I saw was the referee signaling a touchdown that was upheld under review.

South Florida drove down the field and had their chances with a couple of throws from the 30-yard line, but Ball State intercepted B.J. Daniels on the last play. The final score was 31-27, and the Cardinals had just won games against BCS competition in back-to-back games.

I had a great time at the game, and I would highly recommend catching a MAC game in person. It helped that I watched an entertaining game that came down to the wire, but I think still would have enjoyed it had it been a blowout. It's nice to see a new stadium and watch a game that I didn't have an emotional investment in.