Wisconsin lost to Nebraska on Saturday night by only three points. So why does it hurt so much more?

Share All sharing options for: Three Cheers for Mediocrity

What exactly am I supposed to say after a loss like last night's? Hooray, we weren't blown out! Yippee, the Badgers weren't completely embarrassed! Yahoo, our division is really bad so we can still go to Indianapolis even with this loss!

Somehow, none of that is very satisfying. Maybe if this game had been a back and forth slugfest all night long, one in which Nebraska just happened to come out on top by a field goal, maybe then those things would be satisfying. But the Badgers were in a position to win this game for almost the entirety of that. Scratch that. The phrase "position to win" doesn't exactly capture the enormity of fail that was the second half of this football game for the Badgers. In fact, I think the only way to fully capture that fail is via GRAPHS.

Join me, won't you? I need to exorcise some demons.

The following two graphs are what I like to call: charts of fail. 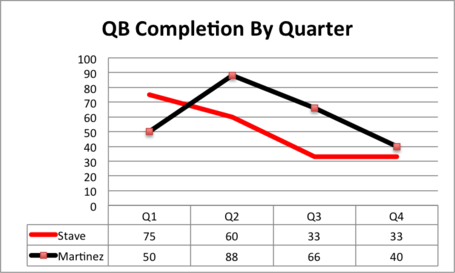 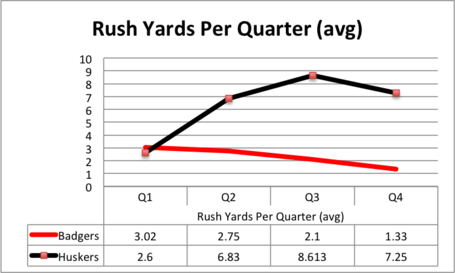 Dear god. Look at those. JUST LOOK AT THEM. Joel Stave has a dramatic decline in completion percentage from one half to the next, while Taylor Martinez only gets better. Now, some of Stave's completion percentage problems in the third and fourth quarters are because there were several very catchable passes that were dropped by Wisconsin receivers. But, at the same time, there were at least two throws that he made that should have been intercepted by Nebraska and instead fell incomplete. So, he was definitely getting worse as the game went on.

More damning, though, is that just as the Badger run game is stalling out, the Huskers are rushing for ever more yards on average.

I'm sure that some of the Husker success as time went on was due to the Badger defense getting gassed -- in the later quarters, it was like they just couldn't get off the field no matter how they tried. But the steady decline on rush yards on average for the Badgers is both puzzling and disturbing. Is this a failure of Montee Ball? Was he tired by the second half? Melvin Gordon and James White made only sporadic appearances in this game, and I have no idea why. Or is this on the offensive line? Were they the tired ones? Are they incapable of playing a full 60 minutes at 100% effort?

To be fair, many of the Badgers points came off of Nebraska miscues that were capitalized on well by Wisconsin. But.... even on normal drives, the Badgers looked pretty good on offense in the first half, and like absolute shit in the second.

I wasn't able to replay the game, so I'm going solely on my beer addled memory, but it also seemed like Matt Canada kept calling the same Montee Ball rush straight up the middle for little or negative yardage in the third and fourth quarters, despite clear evidence that it JUST WASN'T WORKING. I was driven a little crazy by this. At some point, you have to accept that the play isn't there. I don't care if it worked in the first quarter. I don't care if it worked in the second quarter. If it's nearing the end of the third quarter and it hasn't worked three or four times in a row, WHY DO YOU CONTINUE TO CALL IT?

This was a classic case of letting victory slip away. Sadly, it was just another reminder of how far off track the 2012 season seems to be for Wisconsin. And, I'm honestly not sure that it's going to get better. The way things are, I don't even know if I want it to. With the way this team looks, I'm almost certain that a trip to Indy would result in a loss. And even if it didn't, what would be the eventual result? A third consecutive loss in the Rose Bowl? Great. That's EXACTLY how I want to ring in 2013.

Maybe I should just get used to the feeling of watching a so-so football team again. Lower expectations. Enjoy the mediocrity.