Well, we didn't quite get it all in before football started. But that doesn't mean we can't finish this up strong! After the first week of B1G football in 2012, it looks like Penn State would have a new entry if this whole thing was done over... But that's all pure speculation! Let's get to the real, tangible, touchable, and taste-able shitstains of the last 16 years of the conference!

Here's what you missed last time and the rules of the game. Today, we journey onward into the Zook-Wacker Face-saving Special Consolation Game! Lest I waste any more of your time, imaginary reader, let's meet our two just-not-terrible-enough teams:

How they got here: Actually pulled their heads out of their asses and won, 27-17, over 2007 Minnesota.

The '08 Wolverines overcame a 10-point halftime deficit against the '07 LOLphers, riding the expert arms of Steven Threet's and Nick Sheridan's combined 15-38 passing day to an underwhelming but predictable victory. Their ho-hum victory came as a bit of a disappointment after their loss to 2011 Indiana (hey, remember how fucking funny that was?) threw one half of the bracket into confusion. It remains to be seen, though, which Steven Threet will show up today: the 6 INTs Steven Threet or the 13-31 passing Steven Threet. The anticipation is almost palpable.

Punting was winning for the '99 Hawkeyes, as they rode a terrible kicking day from Tim Douglas and a shoddy offensive line to somehow escape Delany Field with a semifinal win over the '97 Illini. The shaky Hawkeye defense managed to give up 23 to an Illinois offense (led by my favorite EVER, Mark Hoekstra) which didn't even average 11 points per game.

This game looks to come down to the matchup of Threet/Sheridan and the Iowa defense: which one can screw this up worse? Jump on... 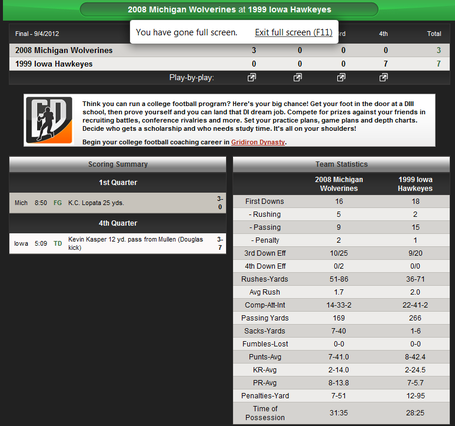 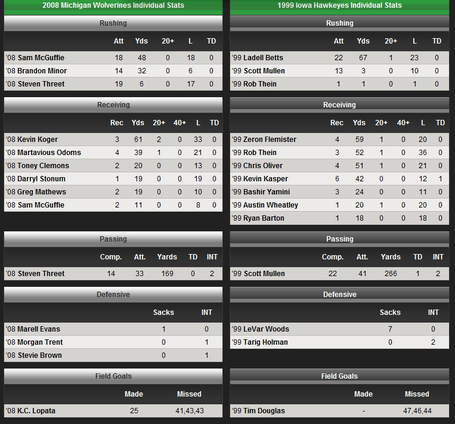 Dave Revsine here, recapping another wild one from Delany Field, as the 2008 Michigan Wolverines, seeded seventh, took on the #4 seed, the 1999 Iowa Hawkeyes. Glen Mason's here to give us his thoughts on--hey, where'd Glen go?

Hello? Security?! Who the hell let this guy in here and where did Glen Mason go?

Stop! You can't actually do a recap like this!

Fuck it. More people are still watching this than the Longhorn Network. 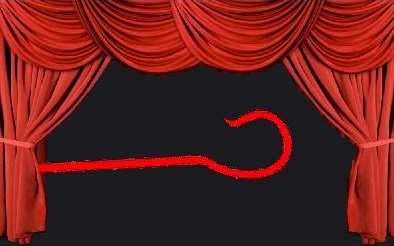 Well, that was...something. Congratulations to the 2008 Michigan Wolverines, whose loss claims them the honor of the Zook-Wacker Face-Saving Special Trophy. Not to go home empty-handed, the victorious '99 Hawkeyes leave with a Participation ribbon and the knowledge that things could, in fact, be worse.

Goat of the Game: The Michigan offense. Kickers. Offense in general. Me for coming up with that bit. 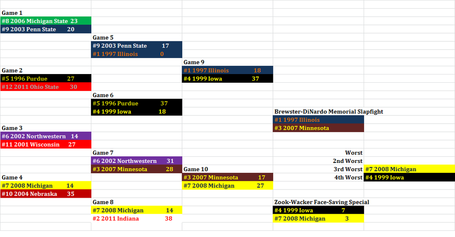 We're almost there! Hopefully, with one of the most disgusting games played by Iowa in recent memory (O HAY), we're setting ourselves up for a photo finish in the Brewster-DiNardo Memorial Slapfight. Stay tuned, tell your friends, and see what the finals of the All-Time Worst Big Ten Team Ever Challenge have in store!