Bret Bielema: No Game Film For You!

Share All sharing options for: Bret Bielema: No Game Film For You! 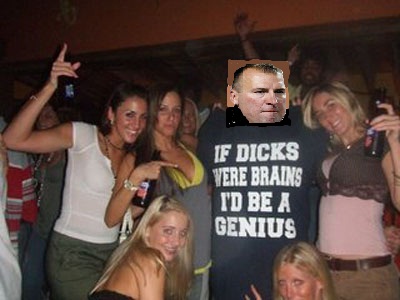 Bret Bielema will not be out foxed. No sir, no sir he won't. Except maybe in the last two minutes of the Rose Bowl. Two years in a row.

Bret Bielema will not give his opponent what he calls an 'advantage'.

So you can kiss his ass if you're going to get HIS goddamn game film.

Bret Bielema doesn't give two fucks that your game was postponed due to a natural disaster. Improvise, adapt, overcome. He did against Northern Iowa, but you don't need to know how, Wizards of Corvallis.

And Bret Bielema will make sure you won't get any handouts from anyone else, either. Because we don't do that to fellow frat brothers, no matter how much of a douchey move it might be. But it's not, because Biels says it ain't.

So that's how we'll roll, bitches. See, this is big boy football, cupcake, and Bret Bielema says 'deal with it, brah'.

Now Bret Bielema has to go, 'cause there's a kegger at Dicka Headus Epsilon tonight, and he's got to get ready.

So get the hell out of his way, because it's a Natty Light Night, and he wants to feel all right.