Have mysterious dark forces been conspiring against Michigan State all these years?

Share All sharing options for: Conspiracy Theory With Michigan State

Scene: Jim Delany's office, B1G HQ, Oak Park, IL. Delany is in a meeting with Mark Dantonio. Dantonio is in a foul mood---his shirt looks mysteriously like an old Michigan one, but the block ‘M' stitching has been removed and replaced with a Spartan logo taped on the other side, and dyed a color not of this world, with maybe a tinge of blue. It's certainly not the MSU green. Also, it looks ill-fitting and loose on Dantonio, and it might be a couple more seasons before he grows into it.

Oh Jesus, Dantonio, would you lay off the conspiracy theories? You're really starting to worry me.

It's not a conspiracy if it's a FACT. And I read this on an Internet message board. So it is fact. A. Fact.

Mark, there is no conspiracy against MSU, and no one doing anything to intentionally harm you.

Why would I want to do anything to hurt Sparty? For one, I am commissioner of the entire conference, and the welfare of all 63 teams in the Big Ten is important to me.

That's what the Internet message boards tell me.

I know. I've known before most of the other sheeple.

I know you know.

Anyway...where was I? Oh yeah, something something you're all important to me, and secondly, let's really look into this Mark. Don't you think maybe...just maybe...all of MSU's past problems were brought on by...MSU?

No! We are actively conspired against!

You guys do enough to hurt yourself on a yearly basis, going back to the founding of this conference. Are you familiar with Occam's razor?

Occam was an OSU grad, and also conspiring against us.

Holy shit. Okay Mark, listen. I think you might have a problem. Have you thought about maybe seeing a doctor?

I don't NEED A GODDAMN DOCTOR! I JUST NEED SOMEONE TO BELIEVE ME!

Okay, okay, calm down buddy. Caaaaaallllllm down. It'll be okay. Look, let's just say, for the sake of argument, you might be on to something. Tell me what you know.

I have it on good authority that there is a book, written by the Masons, published by the Illuminati, protected by the Knights Templar with operations financed by the Rothschilds, that has specific, written instructions that spell out...IN GREAT DETAIL...how The One World Conference will not rest until they destroy Michigan State.

Seriously, you're shitting me, right?

Your denials and disbelief further PROVE I AM RIGHT.

What's this ‘good authority' that you're talking about?

Other Michigan State fans...who have put it on the Internet.

Hang on a minute Mark. 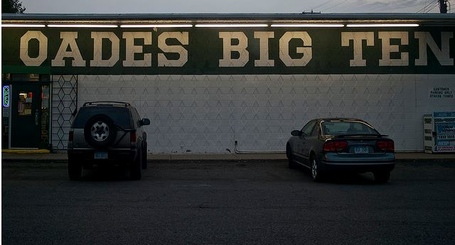 Yeah, right on the money.

Son of a bitch. Well, what was I wrong about?